a safe space for nitwits and lloronas

Since a one-night work trip to Fresno didn’t cure my blues, oddly enough, it was time to enact Operation: Get Outta Town Part Dos. I.e. a two-night, non-work trip to San Luis Obispo. I’m working up to Italy, okay?

Over the years San Luis has become AK’s and my place—although she went to college there, so I guess it was her place and I just glommed on. It has small town charm—but not so much that you start to wonder if people actually live there (like Cambria, which we visited Sunday)—windswept bluffs and good food, but mostly it is not L.A., and even though AK’s radiator blew last time we were there, it feels like a place where nothing can go wrong.

We spent the first night at the home of the Millers, who rescued us after last year’s radiator incident and this time fed us olala berries and baked French toast, which is like the love child of French toast and a cinnamon roll. In exchange, we read picture books to four-year-old Hattie and watched two-year-old Tilly dance around the living room. It was a pretty good deal. 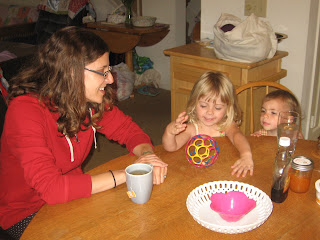 The next day we drove out to Cambria, best known as the home of the Hearst Castle (which we didn’t visit) and not so well known for being the home of Nit Wit Ridge (which we did). In 1928 a local eccentric and garbage man named Arthur Beal started building a home out of found materials and didn’t stop until he was forced into a nursing home. It’s only slightly more sane than the Winchester Mystery House: There are toilet seat picture frames imbedded into walls and fences made of beer cans. It’s sort of a scrubby Watts Towers, a mosaic tucked into the side of a cliff with all sorts of nooks and crannies to explore. 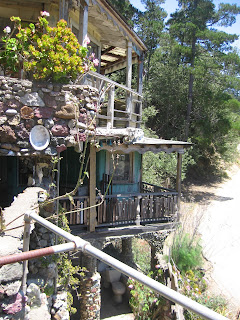 Our guide, a long-haired hippie dude in overalls, showed us remnants of a regular house on the property and told us that Arthur had once lived there with a woman named Gloria, who left him and allegedly took all his money with her. That’s when he started building, with a compulsive his-and-hers motif: a bedroom stuccoed in pink, two toilets in the outhouse, pink and blue porcelain booties cemented into a wall. 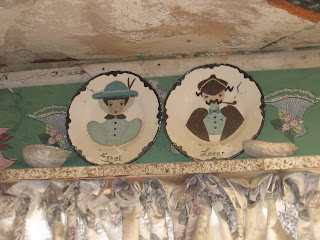 There was a time when stories of people going crazy after some traumatic life event struck me as salacious urban legends. Now I believe them. There have been days when I thought I would become La Llorona herself. Arthur had building and beer. I have San Luis Obispo and Zoloft.*

Back in San Luis, I ate the best vegetarian pozole ever at Big Sky and lamented the world’s vegetarian pozole deficiency. Then we saw Bad Teacher, which is much funnier than the trailers would make it seem and refreshingly non-redemptive. 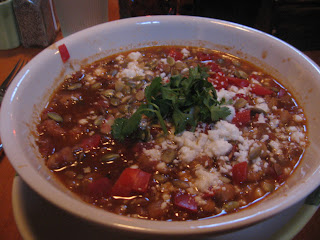 We did our traditional run at Morro Bay Monday morning and drove home playing our favorite car game: “Which of our friends can you picture [working as a prostitute, getting convicted of a white collar crime, turning out to be gay, turning out to be straight, etc.].”**

As I type this, I can hear my cat puking in the other room, so it goes without saying that I could have used another week there. 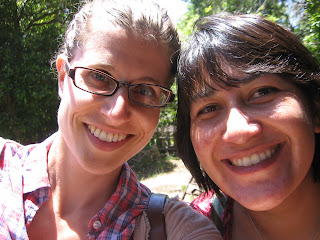 *Yeah, giving that a try. I think my prideful days of never taking anything but Tylenol came to a screeching halt when I shot myself up with egg-making hormones.

i like zoloft. i tried several different anti-depressants and z was the winner. it really helped me a lot. i'm off of it now, but if there ever comes a time, i would gladly go back on it.

hang in there, you smart beautiful woman!!

and about Skippy Dies, by Paul Murray, i highly recommend it. plus that line i quoted you is from the main female character in it.

I second Jesi's statement: hang in there, you smart beautiful woman!!

Several years back, I was on antidepressants and what was so funny to me was that any time it came up, inevitably the person I mentioned it to was on them too. Lots of people don't talk about it, but are taking them. And I know they've done a lot of good for some of my friends. Not sure I was on the best one for me... so keep that in mind if you have any side effects you hate... ask your doc about alternatives if what you have isn't working.

all my best,
C

I am NOT going to be a prostitute!

J&C: Yeah, it seems to be a rather large club. Sometimes I worry if we're over-medicating as a culture. But most of the time I just think, Thank god.

I honestly was thinking of a nice trip I could do sometime in the nearish future. I think I shall copy you. Thanks!