If you know my complicated history with baking, you know it probably wasn’t a good idea to make muffins the night before my Seattle reading. I heard that Michelle Tea sometimes hands out cookies to people who ask questions at her readings, and Andrea Seigel once performed a sort of hip hop/cheerleading dance at a reading I went to. And I would be quite happy to be either of them when I grow up.

But coming from me, baking for my attendees might be more like value-subtracted than -added. Still, there is a crucial muffin-related chapter in the second part of the book. So I compromised and made banana muffins from a Trader Joe’s mix. But I added dried cherries because I can’t resist bedazzling my recipes a little.

They turned out pretty good, as did the reading, which was small but mighty. When you realize how hard it is to get strangers to show up for a reading by a relatively unknown author, you become that much more appreciative of your friends. And your girlfriend’s friends. And your blogger friends whom you met in person for the first time that night.

This is Tracy of Kaply, Inc. and Sizzle of Sizzle Says: 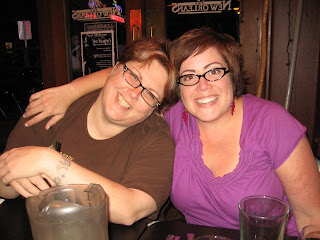 We had food and beverage at this New Orleans-themed bar in Pioneer Square. The service was verrrry slow, and according to Tracy, the diet soda was crap, but I think a good time was had by all. They were both pretty much how they seem on their blogs: Tracy was mouthy in the best way, and Sizzle was sweet and funny. This means they are good writers, having accurately represented themselves.

Driving back to Yoshiko’s place in Des Moines, I reflected on my reading and had various thoughts about how anxiety-prone I am, and how maybe that’s a problem, but I decided to chalk up my worry to the fact that 1) it was midnight, 2) I’d gotten up at four in the morning to catch my flight and 3) I was trapped in some sort of Highway 99/Marginal Way vortex-loop.

The next day I was officially on vacation, which was a nice place to be. I had breakfast in West Seattle with Daisye, whom I hadn’t talked to in two years, and she’s such an amazing friend that I found myself trying to extend my time with her like a little kid pushing for an extra twenty minutes of TV before bedtime. As always, I probably exploited her therapist-like qualities too much: Wait, we can’t be done with brunch! I was just getting started on my relationship with my dad!

Yoshiko and I hit the Burke Museum in the afternoon—seemingly a great way to escape the heat (which was plentiful), except apparently only 12 percent of buildings in Seattle are air-conditioned, and this was not one of them.

But we did see a Starbucks-sponsored exhibit called Coffee: The World in Your Cup. The subtext was Coffee: Don’t You Want a Venti Frapuccino Right Now? So the next exhibit, Alaska-Yukon-Pacific Exposition: Indigenous Voices Reply, was a nice antidote. Here, the subtext was Exhibiting Indigenous People: It Usually Sucks. It was all about the bizarre and exploitative measures white Seattle went to when providing “educational” demonstrations of “local” cultures for the world’s fair in 1909. Think totem pole-stealing, loin-cloth outrage and ethnic stereotypes galore. I geek out on meta-museum exhibits, and this was no exception. 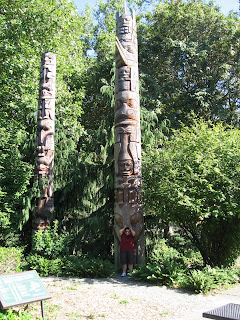 Yoshiko’s girlfriend was having her wisdom teeth out, so I was on my own Thursday, and I quickly realized how long it’s been since I’ve had a day to myself that wasn’t all about Getting Shit Done. It was beyond lovely to drive out to Ballard and wander around the Hiram Chittenden Locks, a feat of nautical engineering that I wouldn’t have thought I’d dig nearly as much as I did.

In fact, if Hiram Chittenden had a Facebook page, I’d become a fan. He was the guy who foresaw the need to make the locks between the canal and the bay out of concrete instead of wood, perhaps preventing a Katrina-like disaster. And long before the days of downloadable seafood guides, he decided that local salmon needed a way of safely passing through the damn. Hence the Fish Ladder, where you can see salmon bravely pumping their fins on their way upstream. Their progress was slow and unglamorous, and I came away with a newfound respect for those little guys. 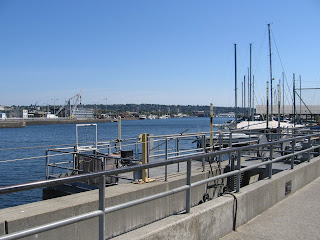 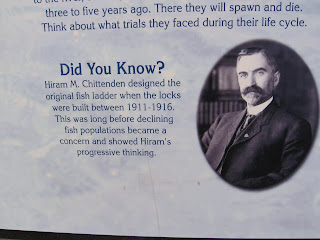 Not to diminish their truly life-and-death efforts, but sometimes the writing and publishing process feels a little like that. All that murky green water and those unfriendly currents. But also, plenty of nice people who will build a fish ladder for you. 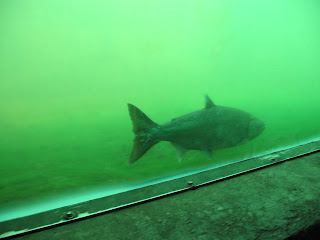 Despite the service and beverage setback, it was wonderful to see you, dude. And I think I'm going to put Mouthy In The Best Possible Way on a t shirt. Or maybe business cards. Or a tattoo.

Any or all of the above would rock. I'm glad you understand that it's totally a compliment.

I'm glad the reading went well. Sounds like quite a trip! (In the best possible way, of course.)

hey, did you know there's only one degree of separation between us? It's a small blogosphere after all...

I actually shot his thesis film--good grief, 11 yrs ago? We met before that on a thesis film of a classmate of his that I was gaffing and hit it off.

He thinks highly of you too.

look at me commenting on an old blog post...but hey, I am a linked person on this blog! :) Cheryl, I love spending time with you and felt the same way about trying to extend the day. I'm glad we reconnected and I hope it stays that way. Your reading was great!
Daisye