what to wear in the valley of dry bones 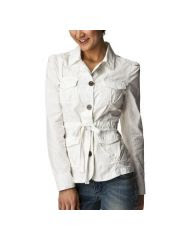 God I love the Ironing Board Collective, especially Michelle Tea’s posts. A long time ago she edited an anthology about fashion to which I submitted a piece about my love of dancer warm-up gear. It was rejected, but that’s okay.

In addition to carbohydrate therapy, I did a little retail therapy this weekend. I did it at Target and I only bought two things. There’s a scene in an old episode of Friends where Chandler has a bad breakup and Monica and Rachel encourage him to drown his sorrows in ice cream. He says something like, “This tastes like crap.” They say, “When you’ve been in this game as long as we have, you switch to low-fat.” Target is low-fat retail therapy for the frequently emotional.

I’ve noticed that denim shirts are back, but I haven’t been sure whether I’m ready to party like it’s 1992. Then I found a cute denim shirt dress with a slightly flared skirt. It was like freshman year of high school meets Mad Men. I was in.

I also bought a white jacket because O Magazine tells me you can wear white, even if you’re not lunching in the Hamptons or lying on a beach in Miami. I’ve since realized the jacket is a tad small and not very conducive to leaning against the wall in the church courtyard next to my office, where I sometimes eat lunch. But it’s still cute.

Every issue, Vogue runs a first-person piece, the gist of which is:

My life was fabulous. I was a [successful author/happy wife/fun-loving starlet]. Then it all went to hell. I [gave birth to my daughter two months early/found out my husband embezzled $3 million/broke my back in a riding accident]. I thought things would never get better. But at the urging of friends, I gave myself a makeover. I [bought my daughter a tiny preemie-sized kimono/invested in a timeless camel trench/got myself a haircut that hid my hideous scars]. Things started to get better. I felt human. Fashion, especially expensive fashion, gave me the strength to carry on.

Because Vogue is populated by ladies lunching in white in the Hamptons, I always roll my eyes at such pieces (after reading every word, of course). But I kind of get it. When visions of the NICU were dancing through my head, I kept flashing to Veronica Chambers’ piece about the tiny kimono. When you’re surrounded by tubes and monitors and fear, any that reminder that fun and glamour are not off limits to you or your baby would be a godsend.

Going through difficult shit is an unwanted makeover of your soul. When you emerge on the other side of the Valley of Dry Bones, you are not the person you were when you started your journey (as the priest put it Sunday at church, although he did not mention fashion per se). You are a new you, like it or not, and you want some kind of external reflection of this. The most accurate reflection of the new you might be a baggy T-shirt covered in cat hair and long-out-of-style jeans, but you want to believe you are not just the old you minus a sense of safety and well-being.

That’s where fashion steps in: Maybe this shirt dress suggests the new you is a mix of hard-won wisdom and motherly instinct with a dash of adventurousness and a soupcon of fuck-you. Mostly, you don’t know who the new you is yet. But if you’re wearing new clothes, you can look in the mirror for a hint.

Whatever works is good.

It wasn't a new realization, but during the Hardest Year of my Life, I remember wanting to focus on my outward appearance as an attempt to cope. I had hoped that if my exterior improved, it would spill over and affect the interior.

Put that sass in your ass, woman, and shove Sadness in the face with your catwalk strut.

PV: It's all part of the Fake It Till You Make It school of living. Thanks for the encouragement. :-)