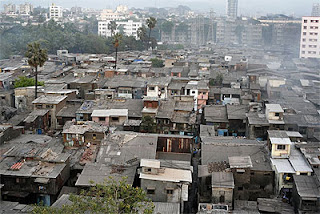 I’ve taken up a lot of server space in the blogosphere lately, so I’ll keep this short. (Also, I should go to bed.) But I just saw a great movie and you should see it too. Urbanized is a documentary that explores just what the hell we’re supposed to do with the fact that something like 75 percent of the world’s population will live in a city within the next few years. Mumbai has 36 million people, the majority of whom live in slums where there is one toilet per 900 people.*

I like most documentaries because if they’re even halfway decently made, I learn something. But a lot of them either illuminate a terrible problem (and are therefore depressing) or are uplifting but only because they focus on one tiny triumph of the human spirit. It was really refreshing to see a movie about a problem no less serious than the exhaustion of our planet, that actually highlighted solutions.

In Bogotá, a former mayor put bike lanes in the center of the streets and implemented a “subway on wheels” bus system that was more flexible and much easier to build than an underground rail system. In a South African township, a nonprofit has installed lighting and staffed “lookout points” that have reduced crime by forty percent. In Detroit, urban farmers have reclaimed vacant lots.

What the solutions have in common is that they’re so different—they’re tailor-made to their communities and based on actual human behavior, not on the bird’s-eye perspective of some “visionary.”

I saw the movie with AK, Christine, Jody, Pedro and Stephen. Christine has a master’s in urban planning and was critical of a lot of aspects of the film, especially the fact that it sort of overlooked the need for economic development. I’m sure she’s right, and the filmmaker, who was there for a Q&A, was the first to admit that the movie is the tip of a very large iceberg, as are the partial solutions it highlights. Still, it was nice to see a movie about the future of the world that made me feel good about the future of the world.

*I'm probably remembering all these numbers wrong. But the point is, they're big.

This topic is on my mind a lot, since I live in a sort-of-city which is big enough for public transit but is still hella far away from anything... making everything exciting approx. an hour (or more) bus ride away. Total pain. Glad there is a solution in sight more-or-less.

Yeah, when I try to take the bus to work (a 45-ish-minute drive), it takes me two hours. Viva buses that don't suck!