chasing waterfalls, and what i read in september 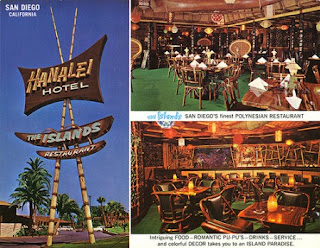 Right now I’m in San Diego for work, staying the Crowne Plaza Hanalei. It has a Hawaiian theme, in case you couldn’t guess. There are waterfalls and tiki statues in the hallways, and canoes hanging from the roof of the valet area. My room is nonsmoking but you would not know from the smell.

I don’t mind, though, because it reminds me of the approximately four times I stayed in a hotel room as a kid. Mostly my family went camping, which my dad, at least, found vastly preferable to expensive, smoky hotel rooms. Meaning, naturally, that my sister and I loved the forbidden fruit that was hotel life.

Once in a while he was forced to attend a conference in San Diego, and his organization put him up at a budget hotel. We came along so that we could all go camping afterward. The hotel had waterfalls and koi ponds, smoky rooms and a pool that I did my best to spend every waking moment in.

I don’t know if I’m staying in that hotel now, although the era of the architecture seems about right. Either way, I’m pretending it’s the very one and that tomorrow, while my dad is working, my mom will take us to the mall across the street and buy us a My Little Pony.

What will actually happen tomorrow is that Jamie and Lee-Roy and I will go to the San Diego City College International Book Fair and see Jesi and Lenise and other local literary folks. Lenise and I had amazing mustardy Brussels sprouts and sweet potato pizza tonight at a place called Local Habit. We caught up on our respective crappy years and the not-so-crappy stuff going on in the present. Almost as good as a pony.

Oh, and while we’re vaguely on the topic of literary things, here’s what I read in September, since I know you were wondering where my monthly list was:

Olivia Joules and the Overactive Imagination by Helen Fielding: Hmm, I wrote a review of this, but it looks like Goodreads didn’t save it. I’m too tired to rewrite it now; the book was just okay.

I Remember Nothing by Nora Epron: Nora Ephron's humor stems from acknowledging brutal truths: People die; the only thing failure really teaches you is that failure is possible. Instead of making for a depressing read, this makes her writing as comforting as one of the decadent desserts she's known for (but which her sister will no longer let her bring to Christmas dinner). This collection of essays, which also covers lighter topics like email and meatloaf, is a fast, funny read. And, like all the best comedy and literature, it reminds you that you're not alone.

Death of a Circus by Chandra Prasad: I'm a sucker for circus novels, and the cover of this one (yes, I judged) was pretty irresistible. The novel itself is a bit rocky--a slow beginning whose purpose I'm still unsure of, and a general aimlessness throughout--but there are some undeniably good ingredients in here, from a shape-shifting animal trainer to an ambitious wire walker. I think the writer had some interesting thoughts about the racial dynamics of the time (the early 20th century) and the political microcosm of the circus, but they never quite coalesced for me.

Welcome to the Monkey House by Kurt Vonnegut: Partway through this book I said to my AK, "I'm not sure how I feel about this collection of Kurt Vonnegut short stories." She said, "I get it. The strength of his writing is his heart, and that doesn't always come through in short stories." I said, "I was thinking more of his misogyny and weird libertarian politics." She said, "Oh."

Now that I've finished the book, I agree with her--stories like "Adam," in which a Holocaust survivor marvels at the birth of his son, and "More Stately Mansions," about a poor woman's decorator daydreams, are thoroughly kind to their characters, sometimes to the point of not fully developing them. (Which doesn't mean I don't take issue with the rape fantasy that is the title story.) At his best, Vonnegut is generous, clever and appropriately skeptical of all political systems. At his worst, he's politically problematic (to me, at least), simplistic and a not-very-scientific sci fi writer (in "EPICAC," a man responds to a robot's request to "define poetry" with no apparent irony; the robot proceeds to spew brilliant sonnets). The stories add up to a book that feels a bit dated, but in an interesting way.

'More Stately Mansions' is one story that has stuck in my conscious memory because of how nitpicky we (I) can get over petty details in our useless perfectionist tendencies.

Love the postcard. I spend considerable minutes thinking back to the 70's and even the 60's, realizing that 40+ years ago parallels to how we used to view the 40's and the 50's while growing up - how quaint and archaic it all seemed.
:)

Yep, every moment we live is someone else's nostalgia. Or maybe our own future nostalgia. I liked "More Stately Mansions" too. It was a testament to mind over matter.