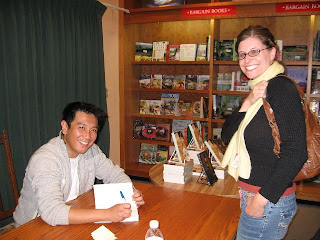 Friday I showed up late to Noel’s reading at Vroman’s. While you can count on many authors to read for a good (or not so good) 45 minutes, it was just my luck that Noel kept things short and sweet—so I only got to hear a few minutes of his seemingly really interesting new novel, Talking to the Moon. Noel is a sometime actor, so he read well, too. Sigh. At least I was there for the inspiring Q&A and tasty samosas.

I can’t wait to read Talking to the Moon, but I have about 250 more pages of Han Ong’s The Disinherited. It’s an ambitious and well written book, but it’s slow-going because A) the sentences are a lot more complex than those usually found in contemporary novels and B) it’s uber-cynical.

The narrator is the disillusioned son of a Filipino sugar mogul who (contrary to the title’s suggestion) finds himself with a huge chunk of dirty money to get rid of. He’s equally disgusted with the virtual caste system and unthinking Catholicism of his home country as with the greed and bullying that characterize his adopted one (yes, that would be the U.S., where he’s frittered away his teen and adult years getting in trouble, seducing women and teaching at Columbia).

Ong takes a dark view of stuff you can’t really take a bright view of—imperialism, globalization—and gives his protagonist the task of doing good in such a world. No wonder the poor character spends most of his time hiding behind his sunglasses. But the deeper the hole the author digs (and a few hundred years of colonization is pretty deep), the more interesting it is to watch the story climb out of it. 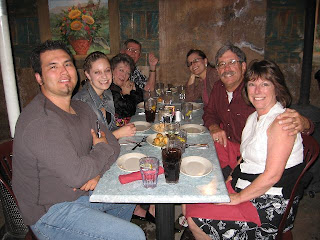 Saturday my family got together at C&O Cucina to celebrate Cathy’s birthday. I was in a bad mood because I was really tired and a power outage had thwarted my plan to do free laundry at Cathy’s house, but the garlic knots drenched in olive oil pulled me through the hard times.

Thanks for coming to my reading. It was greeeeeat seeing you.

garlic knots love you too

N: Thanks for reading! (And writing, of course.)

S: They love me so much that they've taken up residence on my ass.