Books/movies/TV shows that are written in the present day but take place in Olden Times and feature heroines who magically have 21st century brains.

I call it the Dr. Quinn Medicine Woman Phenomenon: Despite being bo in, oh, the 1830s, Dr. Quinn is somehow an anti-slavery, pro-Native-American-rights, free-speech-advocating, anti-drug feminist.

I just started listening to a new book on CD, which AK had laying around, called The Bad Behavior of Belle Cantrell. The cover implied it would be fluffy chick lit, which is a genre that I am technically against but can enjoy quite gleefully. (On a side note, I loved the Sex and the City movie—not as a guilty pleasure but unabashedly, as one of the most realistic, mature and touching movies about relationships I’ve ever seen.)

But Belle Cantrell takes place in the Prohibition-era South, where old rules of propriety are dying slow deaths, and it takes a spunky, anti-racist feminist with an ahead-of-her-time haircut to shake things up! I’m only one disc in, so maybe it takes unpredictable tus, but I’m guessing Belle shakes things up. 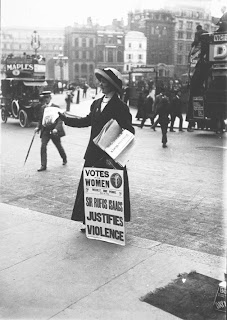 The Dr. Quinn Medicine Woman Phenomenon is annoying because it allows the writer and reader/viewer to feel progressive and political without actually being controversial. I can listen to Belle Cantrell and think, Hey! I’m against lynching too! I am taking a stand!

But taking a stand against lynching in a culture where lynching is widely reviled (which is not to say that it doesn’t happen, just that the perpetrator would easily be declared a bad guy) is actually not even as challenging as being asked to sympathize with a character who’s a product of her time.

What if Belle wanted to protect her farm employee Luther from the would-be lynch mob not because she had a circa-2008 sense of justice but because she didn’t want to lose a good worker? Or because she had some patealistic sense of ownership of him? (And I’m not sure that she doesn’t in the book, but it’s deeply subtextual and probably subconscious even for the author, I suspect.) Something that would make us squirm and wonder what we would have been like in the 1920s.

I like to think I would have been a suffragette, but I know that, like 90 percent of the population, I’m lazy and vulnerable. I could have easily waved a fan in front of my face and said, “Of course I believe women should get the vote, but we’re just not ready yet.”

Yeah, avoiding that Dr. Quinn phenom' (great name for a peeve!) is a tricky balance. I thought it was successfully accomplished in the '94 film of Little Women, in Susan Sarandon's portrayal of Marmee.
And okay, I have to confess to also being lazy and vulnerable when it comes to helping to fight for necessary causes (I'm almost embarassed to know such True Fighters as Noël A)

I'm too lazy to be a revolutionary. Unless they have a section where you can sit and watch the revolution, maybe on high def, and perhaps with a frosty beverage? Cuz I could TOTALLY do that.

TL: Haven't you heard: The revolution will not be televised. I'm pretty sure it will be on YouTube, though.

Completely get it. But again, you just don't know what you would have done in the 20's.

Roared, I hope, and not invested in the stock market.

We all have to remind ourselves that there are LONG history about women's rights.

Women's Trade Union League (Child Labor's Law, Health and Prison Reform)- to improve wages working and condition for women. **One thing I know for sure, my mom always tells me that she refuses to order food from Carl's Jr because they don't pay equal to women..

Sally Field, an actress, played "Norma Rae" about the rights to hire women in mill factory while she was a single mother. It was number 3 rank movie at that time.

I even learned that there are even new laws in the year of 2008!

We never surrender our rights, don't we???

Thanks for the facts! I'm surprised Carl's Jr. hasn't been sued, if they don't pay women the same amount as men. I'll boycott them too--if for no other reason than their food kind of sucks also.

Thank you for speaking out courageously against anachronistic activism. It's so demonic because it makes real, complicated heroes who had views that we admire and also views that we have come to detest look like heels.