Showing posts from June, 2007
Show all

- June 28, 2007
I’ll let you in on a little secret: Part of the reason I’m a fiction writer is because I’m lazy and impatient. Think about it. If you want to make a film, you have to find financing, assemble a cast and crew, shoot, most likely re-shoot and edit. There’s a reason so many actors knit. It’s because days on the set are slooow. As a solo writer with just a laptop and my imagination, I am light on my feet. I think it and it is. No equipment, no committees. But then I found myself planning a performance with Jamie and Alanna . We wanted it to be multidisciplinary and slightly more cohesive than your average “here’s a bunch of artists all doing their thing” evening. Alanna, who has a way of thinking that I can only describe as diagonal, said, regarding potential themes, “I’ve been fascinated with the idea of live blogging.” Then she laughed her signature laugh, sort of a can-you-believe-this guffaw. Jamie and I liked this live blogging thing. We didn’t 100 percent get it, maybe,
2 comments
Read more 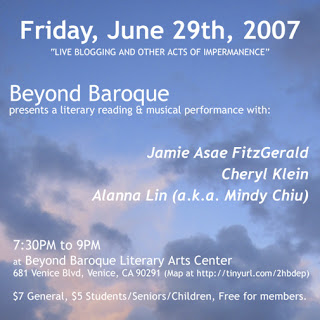 into the customer service woods

I wish I could channel Tracy Lynn Kaply at will. Or at least, I wish I’d had a good sharp spoon on me Friday at Bally’s. It’s really the only way to deal with corporate bureaucracy. Here’s the story: My healthcare company will reimburse me for my gym membership if I go 50 times in six months (it’s true—there is a healthcare organization that actually promotes preventative care. Oxford . I recommend ‘em). Through the miracle of cheap-ass-ness, I managed to do this. Now all I needed were three things from Bally’s. 1) A signature from any club employee confirming that this was a facility that “promoted cardiovascular health.” 2) A printout stating my monthly rate. 3) A brochure listing the gym’s amenities. So, like the baker in Into the Wood s who must find five treasures in order to reverse the curse that has left him and his wife childless, I took a deep breath and went into Bally employee Tom’s office. Tom [lifting cell phone away from his ear ever so slightly
2 comments
Read more

more of this, less to catch a predator

- June 21, 2007
My friend Tommy produced this Dateline NBC segment about the Vietnamese community of New Orleans East, which, led by a priest at Mary Queen of Viet Nam Church , has retu rn ed and rebuilt their neighborhood at astoundingly high rates (90 percent vs. 45 percent for the city as a whole). I watched it and thought, “Wow, I can’t believe I’ve been too lazy to repot my philodendron for almost a year now.” Check it out: http://www.msnbc.msn.com/id/19292199/
4 comments
Read more

a virtual visit to cyberjaya*

- June 20, 2007
It’s 11:32 in Malaysia right now. I know that because I recently discovered sentraal station , which, as far as I can tell, is a compendium of blogs (plus a little online clock) by Malaysians in Malaysia and the diaspora (I love saying, “and in the diaspora”—it’s such a great word). Now that I’ve finally finished A History of Malaysia , I’m all about living in the now. Reading this book has made me realize that, as much as I love history, I could never be a historian, because they’re all about original sources, and I’m all about well-written narratives. I don’t want to be a detective; I want to read a good mystery. But because blogs are original sources that often contain well-written narratives, I can get into them. One day while clicking “next blog,” I stumbled across a Malaysian blog with a historical bent called Kecek-Kecek . It appears to be written by a guy living in the UK who’s a bit homesick for his native Trengannu, about which he relays lots of interesting facts
4 comments
Read more

the real victim here is tinkerbell, of course 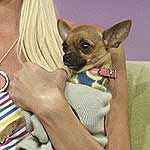 Dear L.A. Times and Paris Hilton, It was interesting to lea rn that Paris will be doing more time than 80 percent of inmates in a similar situation . (And by “interesting,” I mean that I feel thoroughly disgusted with myself that I’m not blogging about Gaza right now.) Yes, apparently being rich and famous occasionally works against you, in the same way that being white occasionally works against you. I think it’s fine to call out these moments of injustice, even to “analyze 2 million jail releases,” as the Times did, or to cry really hard and hug your parents, as Paris did. I just hope that both of you have spent equal time questioning the privilege that led to this smidge of anti-privilege. Paris , I hope you spent just as many nights lying awake in your pimped-out Simple Life trailer wondering, “How did I get my own TV show? How come the richer I get, the less I have to pay for?” Similarly, Times, I hope that somewhere in those 2 million cases, you notice that
2 comments
Read more

talking about the moon

I just finished reading Noel Alumit ’s second novel, Talking to the Moon , and while the cover does not feature a martini glass, a pair of high-heeled shoes or a bodice in the process of being ripped, I hope you will put it on your beach reading lists, because it’s good. Talking to the Moon tells the story of a “Filipino American ” family (to borrow the phrase that the son’s Taiwanese boyfriend is always baffled by—why, he wonders, are America’s Asians so quick to identify with a country that wreaks havoc on their self esteem?): father Jory, an altar boy tu rn ed pagan healer and mailman; mother Belen, a nurse who will talk to any deity who will listen, most frequently Mary; and their angry son Emerson, who talks to his dead brother on the phone, but can’t say much of anything—especially not “I love you”—to his boyfriend. The book begins when Jory is shot while delivering mail by a racist man fresh from shooting up a Jewish daycare center. This really happened in L.A. a few yea
6 comments
Read more

all things woodsey, and some other things too 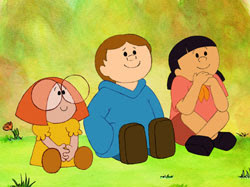 1. biffy is like brad pitt to me Screenings of film students’ work in L.A. are not a little talent show for friends and family. People like Gil Cates (known to me and Steph as The Guy Who Would Never Grant The Daily Bruin An Interview, but known to most as The Guy Who Produces The Academy Awards) serve as hosts, and people like Anne Ramsay (known for Mad About You and The L Word ) star. And the quality is really good, or at least it was at Friday’s student showcase at UCLA. But the jewel of the evening as far as I was conce rn ed was Michelle Banta Tessier’s Camp Bean: All Things Woodsey, an animated film about a shy little boy slowly lea rn ing to love his summer camp, which is remarkably like UniCamp , the place I spent three summers singing nonsensical songs, protecting eight-year-olds from menacing field mice and trying to explain to myself and my kids why going days without a shower was actually a good thing. In fact, Michelle looked a lot like Feather, the head co
4 comments
Read more

a little community there

- June 04, 2007
A few years ago, when I was in search of geeky gay folks to hang out with, I attended a book group at the LA Gay & Lesbian Center . I announced to the dozen 45- to 60-year-old men in the room that I was just trying out the group and hadn’t read that month’s book, a gay historical fiction novel by a female author. Nevertheless, the group leader kept turning to me and asking for “a woman’s perspective.” I never went back. This Saturday marked Book Group Attempt #2, organized by AK’s college friend Joel, who’s now a seminary student. AK told me to expect a bunch of fresh-faced, young, Christian married couples. I figured that if the queer folks had let me down, maybe common demographics weren’t all they were cracked up to be, and agreed to read Kurt Vonnegut’s Cat’s Cradle and bring a tropical snack. AK and I stopped by Trader Joe’s, where we asked a curly-haired clerk in tight jeans and Ugg boots where the tropical drink mixes were. TJ’s apparently has no such thing, but that didn
3 comments
Read more 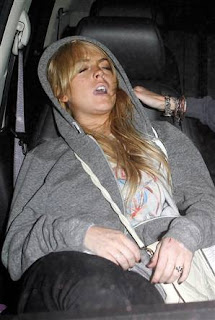 It’s happened again: I’ve gotten addicted to caffeine. Which is making me really tired, except for that hour a day when coffee is pulsing through my veins. This morning I switched to decaf. So far I’ve taken three naps today.
Post a Comment
Read more
More posts