sympathy for the devil and my own dirty hands

1. skip this part if you don't enjoy white tears

When it comes to acts of individual violence, society has little patience for the perpetrators. Or rather, we try to make up for the failures of courts, the child welfare system, public education, and more with our own swift, harsh judgments. The woman who drowned her children, the man who shot up a McDonald's—why should they get a moment of our time when the people they hurt don't get another moment, period?

On social media, we tweet hard against the Trumps and Kavanaughs and white women who commit microaggressions. I'm not sure it should be otherwise—a tweet just composed itself in my head: Just realized that you can't spell Kavanaugh without ugh—but the urge to judge is also a deflection from self-judgment. If I can dehumanize Karen, then I must not be Karen, right? Right?

It's not that I think every villain deserves an origin story, but I do believe every villain has one, whether or not we should tell it or pay money to see it.

I'm thinking about these things because I've been (fruitlessly so far) deep in the adoption world, which—like everything else we touch—is rooted in inequality, capitalism, and racism. I published a poem in which I wrote about some of these factors, and a reader identifying herself as an international adoptee left a very harsh, very accurate comment on it. I want to say she misread things, that she brought her own biases to the poem, but that wouldn't make her comment any less valid.

If I want to say things in this world, about this world—and I don't seem to be able to stop myself—I have to accept the pushback that comes with the territory. People are allowed to and should fight my speech with speech.

But damn I feel like a piece of shit.

And sometimes I envy less self-loathing white liberals, who find ways to mostly opt out of tricky situations where they get their hands visibly dirty. The people who write excellent, finely observed novels featuring a tiny cast of entirely white characters; the people who don't venture into adoption because they have functioning ovaries. They vote for the right people and donate to the right places and just keep quietly educating themselves, and they seem so unassailable.

I spent a long time in therapy trying to learn that innocence and purity are not actually great life goals. Because I'm only half convinced of it, now, I sort of march forward in agony: trying to do good work (that's also a Fake Email Job and part of the nonprofit industrial complex), be a good neighbor (even though I'm unfairly grouchy at J&J almost every day and I worry that they know; how could they not know?), and accept my own limitations as an individual human. That's what humility is: doing what I can, knowing what's above my pay grade, knowing that being so self-sacrificing as to be miserable would actually be of no service to anyone I love. But damn it's hard. 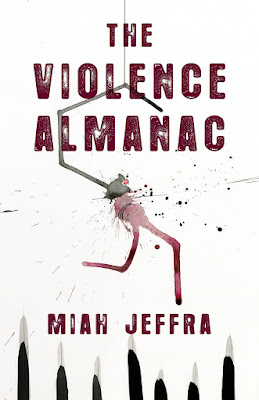 All of the above is also part of why I devoured The Violence Almanac (Black Lawrence Press), a collection of short, unflinching stories by my friend and fellow CalArtian Miah Jeffra. Fiction is in the business of humanizing, queering, complexifying, and daring to imagine an experience not one's own. That's why I love it.

Without, IMO, ever glorifying violence or excusing those who commit it, Jeffra spends time in the minds of both perpetrators and victims. Of course, if you aren't deep in denial, you know that most perpetrators are victims in one way or another. When woundedness meets power—in the case of Mr. Huberty, a man who struggles to find work but stockpiles guns in "Eye Wall"—trouble usually lies ahead.

I was particularly moved by the opening story, "Babies," which imagines how Andrea Yates killed her children to save them from the void she felt: "A cutting away, releasing the doubt, to preserve what good they had left in them.... If she kept on to them, held them close in this world, her world, they would all fall into that gaping hole, the one of eternal torment."

During a week when I've wondered what right I have, if any, to be a parent, I am thinking about how it takes a certain amount of blind self-confidence to parent. You have to shrug and say, "Well, I'm here, I'll do my best. Even though my children will come face to face with the world's cruelty. Even though I'm kind of a piece of shit, I'm the piece of shit my child is stuck with."

But Jeffra also lets us see, in no uncertain terms, what it feels like to be Yates' terrified child. In these ways, the book is much more painful than the bloodiest movie, despite the fact that there's very little graphic violence.

In "Gethsemane," a realtor gives a gleefully deranged tour of a house in a gentrifying neighborhood, stuffing the violence of its history into the corners, though it seems to push at the doors of every closet.

In "Ain't No Thing," a man tries very hard to be unassailable his whole life. From his father, he learns how to take a beating. Women complain "I want you...to want something from me!" He tries to be even nicer. He tries to hold it together. He tries to follow the rules and bury his hatred for those who don't—specifically, some young men of color on a MUNI bus, carelessly disposing of their trash—because it would be too painful for him to learn what the young men may already know, that Goodness will not save him. It reads like a cautionary tale.

Jeffra's work is so gutsy and imaginative and searing. Somewhere in here is a manual for how to live in this world, and how not to.

"What is time, even" is a thing I say a lot lately, but I'm pretty sure all of these things happened since last Wednesday. In chronological order:

is there any other kind?

A couple of years ago, the amazing writer-moms of the IKEA Writers Collective started wishing each other "Happy Fucking Mother's Day" because it's such a strange, fraught holiday (though, really, is there any other kind?).

In recent months, we've tried to inject some new strategies into our adoption attempts. So far that's meant a lot of paperwork and frustration. I'm frustrated for many reasons, including old boring feelings of maternal unworthiness, but also because one reason I hesitated about trying to adopt again was that I didn't want to dump all that longing onto the kid I was so, so happy to have. He didn't deserve it. C.C. didn't deserve it. I didn't deserve it. 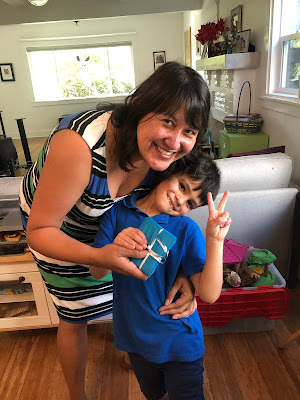 I don't know how to live in the present—a present that, in these sweet, tentatively sunny, vaccinated days, I am grateful for deep in my bones—while still planning for the future. Maybe there is some super balanced Zen person out there who does. But until I become her, I have C.C., Chaos Muppet to my Order Muppet, who reminds me to come up for air (as I remind her to set an alarm if she needs to, you know, get up at a certain time). She just sent me a beautiful Mother's Day post by Emily Simon, about how we all mother ourselves to fill in the gaps left by our mortal mothers. We can fill them with music and art and of course each other.

I'm glad the zeitgeist has figured out that Mother's Day, like all our faves, Is Problematic, partly because it's fraught with narratives about women who "do it all," when no one does or should. Sometimes I think "Oh shit, I co-edit a magazine called MUTHA when I only have one kid and I'm only one third of his moms, I'm such a fraud," but I guess that's kind of the point. This isn't math. This isn't even fair: so many people mother without being mothers (side note: read Torrey Peters' Detransition, Baby for a savvy, sad, funny take on this theme, and on daring to mother when society tells you you have the wrong body parts for it). Some people are mothers without mothering, and they deserve love and recognition too.

I'm grateful to the mothers who haunt my life in the best way: my mom, Dash's birth mom. And to the mothers who are earthbound with me: to my sister and friends who take care of me when I'm exhausted from making mediocre dinners and filling out PDFs. And especially C.C., who does it all, but not in THAT way—not all at once. Happy Fucking Mother's Day.