Showing posts from August, 2007
Show all

i'm a loner, dottie, a rebel

You're One Hundred Years of Solitude ! by Gabriel Garcia Marquez Lonely and struggling, you've been around for a very long time. Conflict has filled most of your life and torn apart nearly everyone you know. Yet there is something majestic and even epic about your presence in the world. You love life all the more for having seen its decimation. After all, it takes a village. Take the Book Quiz at the Blue Pyramid . (Thanks to Tracy Lynn, a.k.a. Catch 22, of Kaply, Inc. for the quiz.) Ironically, I’m the book that I didn’t quite finish reading my senior year of high school. It was after the AP Spanish test, and all we were required to do was read a Spanish-language book in translation, then write a book report on it en español. The night before the report was due, I still had about 20 years of solitude to go. So I faked it—in Spanish, no less. I’m guessing Mr. He rn andez saw right through it, but after 40 years of teaching, he was even more bu rn t out than us
6 comments
Read more 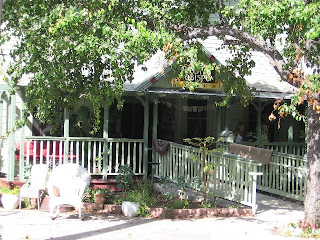 1. get to know your neighbors The sign said “ Hostel Obispo ,” but the building looked like my dream house: a beachy green Victorian with a bay-windowed front room all to ourselves. I was glad all the real hotels were booked. In the communal living/dining room, amid San Luis Obispo city maps, long distance rate charts and a multicultural poster celebrating the golden rule, was a scroll that said “50 Ways to Form a Community.” The ways included “Shop at farmer’s markets,” “Get to know your neighbors,” “Plant a garden” and “Take a walk.” Not too long ago, I’d commented to my sister, “There are people who are healthy because they go to the gym and eat low fat frozen yogurt, and there are people who are healthy because they ride their bikes and shop at farmer’s markets. I want to be more like the latter. But of course there are also people who eat French fries and watch TV, and I might be that kind of person too.” While AK’s and my weekend did include some really good fries (at
7 comments
Read more

Right now I’m reading I Am Muslim , a collection of essays (first published as a newspaper column, as far as I can tell) by Malay writer Dina Zaman . It’s a heavy-handed title for a light-hearted yet sincere book. (I felt a little weird reading it on the plane last week, not so much because I thought someone would make a Muslims-are-terrorists assumption and be afraid of me, but because I thought I might be mistaken for a pretentious provocateur just daring a TSA employee to “randomly” search me. Like I was all, “Ooh, look at me, I’m holding a sign that says ‘I Am Muslim’ at the airport. Even though I’m not Muslim. I am sooo edgy.” Also, the insole of my sneaker somehow got folded under while re-shoeing after going through security and I wanted to take my shoe off and flatten it out so badly once I got on the plane, but it just seemed too shoe-bomber-esque. This is another reason why I have to start buying nicer clothes that don’t fall apart so easily.) A more accurate title m
4 comments
Read more

1. friday Weird weekend. I got genuinely drunk for the first time in ages while consuming deceptively tasty mojitos at Sara ’s and watching Hairspray (the original, not the bad new musical). 2. saturday AK, Christine and I went to Sunset Junction . It was my first time, and I enjoy almost all street fairs for the good food and the people-watching, but I couldn’t help but notice how similar it was to the Manhattan Beach Old Hometown Fair , just with better bands, more tattoos (“One third of Gen Y has a tattoo,” Christine informed us) and booths selling punk rock baby clothes instead of ceramic soap dispensers. It was so hot that I felt like I was moving underwater (but, like, really hot water). People would have conversations that interested me, but by the time my tongue roused itself to participate, the next topic would be well underway. AK got sick and couldn’t make it to Heather’s otherwise very fun 30 th birthday bash (here’s a tip to anyone else planning a 30 th
7 comments
Read more 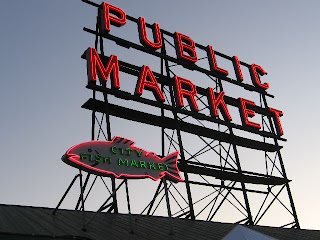 Seattle stays light until 9 p.m. in August. The late-night sunsets make you want to be outdoors. Did I mention there's lots of good coffee to be found? After two and a half days of worky stuff, Daisye picks me up and we flee to an island (Bainbridge), where we do what we do best: shop for books, old clothes and antiques, and drink coffee and talk. It's an artistic island. This dog is clearly a local muse. Back in Tacoma, there's an art festival going on. Really talented students draw perfect copies of famous paintings in chalk on the sidewalk. We wonder what it would be like if they did their own stuff. But a few feet away, a group of guys who seem like they belong in a Judd Apatow movie are doing improv that involves a lot of slow motion and fake swordplay. They are not as funny as a Judd Apatow movie. Maybe doing your own stuff is overrated. Daisye and I hang out at her very cute apartment, home to Kinks, Necco and many antiques and cool crafty inventions. Daisye is curr
7 comments
Read more

a PSA for straight people

- August 16, 2007
Dan Savage has this advice to two men who write to him essentially saying, “Dear Dan, I’m terrible with women and can’t get any action. Am I gay?”: If being an inept heterosexual made a man gay, then gay men would not compose a measly 3 percent of the population…. You're not fags…you’re socially maladapted straight boys. Thank you, Dan, on behalf of a queer girl who has heard a few of her straight female friends say, “I’m so fed up with men. I wish I were a lesbian” or “If I don’t meet a guy soon, I’m going to start dating women.” Ladies and gentlemen, consider the implications of what you’re saying. 1) That dating your own gender is what people do when they’re not attractive or charismatic enough to draw a member of the opposite sex (even if you pose it as an “I wish I were a lesbian” compliment, it’s still insulting). 2) That dating your own gender is easier. Of course it’s easier when you’re actually straight . There’s a very low possibility that someone you’re
5 comments
Read more

what happens at espresso vivace... 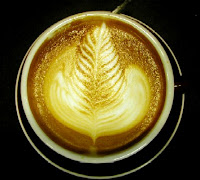 Even though I’d been to Seattle twice before, this was the first time I really got the whole coffee thing. I’ve been a coffee drinker ever since I discovered the open mic at the Hungry Mind in high school, but I’ve always drunk it for A) the caffeine and B) the sugar. But since cutting out sweets (except for that muffin last week, those elephant-shaped graham cookies on Saturday and all those sweetened dried cranberries yesterday), I’ve been forced to become a plain latte girl. (Black coffee? What’s that?) And over the course of four days in the greater Seattle area, I drank so many amazingly good ones—strong but not bitter, frequently featuring a little leaf drawn in the foam (shout-outs to Espresso Vivace , Black Water Café and the Blackbird Bakery )—that I may never be able to retu rn to Starbucks. But Starbucks must have sensed that my loyalty was waning, because I arrived home to a gift (a mix CD of all its favorite new indie bands) accompanied by a passionate if embarr
6 comments
Read more

- August 08, 2007
One of the things I love about public radio is that you don’t have to have a radio-friendly voice to be a star on its airwaves. Long live David Sedaris! And the guy who does Middle East in Focus on KPFK, who sounds exactly like Winnie the Pooh. But, in regards to the latter, I have to say it was really weird to hear sweet, innocent Pooh say, “Egypt has outlawed female genital mutilation” on my drive home today.
2 comments
Read more

i’m good enough, i’m smart enough and doggone it, someone tagged me 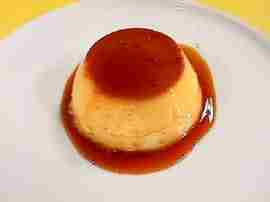 I’m sitting here feeling hot, because it’s hot, and stupid, because a couple of days ago I sent my manuscript off to a writer I know and respect, who recently started a new imprint for lesbian fiction, poetry and nonfiction—and I just got a very thoughtful email from her reminding me that they’re only reading poetry this year, not fiction, which I would have known if I’d read the submission guidelines more carefully. What do I always tell budding writers who want to know how to get their work published? Read the fucking submission guidelines. Only I don’t say “fucking” because I’m at work when I tell them. Sometimes I’m a very careful and thorough person. Sometimes I’m not. To distract myself from my embarrassment, I’m going to respond to Bronwyn ’s meme, 8 Random Facts About Me . She tagged me, which is exciting—like getting picked not-last for the volleyball team, or what I imagine that is like, since I never actually experienced it. This meme has some rules:
10 comments
Read more 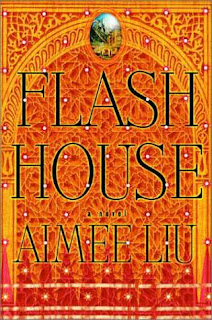 When I told Terry I was trying to write a domestic family saga that opened up part way through and turned into a more global story, she mentioned Aimee Liu ’s novel Flash House , which, she said, “starts out as a character-driven drama, but turns into a political thriller.” She meant it partly as a cautionary tale: “Aimee had a really difficult time marketing that book,” she said. But to me such a statement is often a selling point, and so I bought Flash House (used, I’ll admit—but in hardcover!) and I just finished reading it an hour ago. Genre-related schizophrenia or not, the entire thing is a page-turner. I read it at breakfast instead of Elle, and if you know anything about the OCD intensity of my morning routine, you know this is a big deal. The character-driven-drama part of the book involves Kamla, a half Kashmiri, half Chinese child prostitute living in Dehli in the late 1940s and early 1950s. Early on, she tells us (and I like that Liu chooses a non-American narr
2 comments
Read more

elizabeth ong is missing, but stephanie sheh is alive and well

- August 01, 2007
My actor friend Stephanie starred in short film called “The Dress” as part of AZN Television’s 72 Hour Shootout contest. It’s a noir piece featuring guns, a missing girl and a laundromat. Go to http://www.azntv.com/72hr/# and cast your vote for your favorite movie (there’s some logging-in business, but it’s not too painful—you don’t have to set up a password or anything, although they do want to know your race for some reason, but you could make something up). If you know what’s good for ya, kid, you’ll vote for “The Dress.” It’s a gem of a flick, and Steph’s a classy dame.
Post a Comment
Read more
More posts