Showing posts from March, 2012
Show all

taxes and other signs of possible maturity 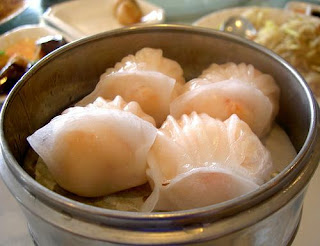 Jamie and I spent the morning at a nonprofit training seminar, the highlight of which was running into my old Daily Bruin editor, Edina. When I think back to my Bruin years, I picture myself and my fellow A&E section staffers running around like vulgar little monkeys, doing interpretive dance in our cubicle, immortalizing our own hilarity on our Quote Wall and not returning calls from hardworking arts publicists, because we believed publicists were the devil incarnate, and because we were lazy. Edina was a grownup amidst the chaos, laughing good naturedly at our absurdity, then going about the business of getting the fucking paper out. So when I say she seemed exactly the same 14 (oh my god) years later, it’s a compliment. She was a very mature 20-year-old. Me, not so much. I felt like I needed to be on really good behavior today. I’m proud to say I didn’t pick all my black nail polish off and leave the chips in a little pile on the table or leave the meeting to go buy myself
6 comments
Read more 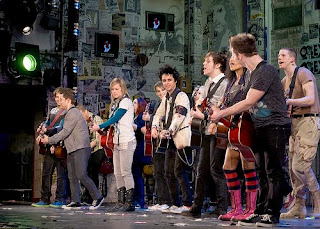 For Valentine’s Day, AK got me tickets to American Idiot (the musical), which combines two things I like very much: Green Day’s American Idiot (the album) and musicals. When we went to Saturday’s matinee, I discovered that it also includes a lot of another thing I love: Rent . A lot. From the general punk aesthetic (understandably) to the choreography to the spare sets adorned with scaffolding and a shopping cart to opening each scene with a date stamp to the curly-haired Puerto Rican-ish love interest who wears short skirts, fingerless gloves and gets addicted to heroin and in one scene angrily throws it across the room. A bit derivative, right? (See photos below for further evidence. American Idiot followed by Rent .) So watching it was a little weird. As various disaffected youth writhed about on stage, I felt sort of like, What’re you so mad about, honey? I wondered if this was what it would be like to see Rent for the first time at age almost-35. I even had one of those awf
Post a Comment
Read more 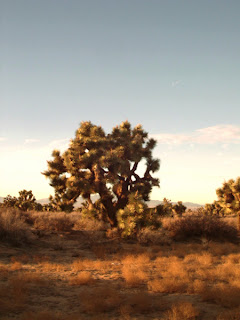 It was one of those weeks. Yeah, AGAIN. But I had the day off today, and I had a gently used laptop with my former mentee Daniela’s name on it. She mentioned that she was in the market for one, and my amazing friend Craig donated his. So I drove out to Lancaster to deliver it. Not a drive I was looking forward to, but the trip plus Daniela worked their magic. There have been times when I’ve wondered if I find hanging out with Daniela healing because her problems have often been bigger than mine. I’m not at all comfortable with this possibility, but that might be a piece of it. Mostly, though, it’s about who Daniela is: this hilarious kid who’s faced down her demons at times, chased after them at others, but never given up—and who, now, is not really a kid at all. In the past six months, she’s become a mother, gotten her papers, gotten a grownup job with benefits and everything, and become the primary breadwinner in her household of six. That’s a hell of a lot for a 19-year-old to ta
2 comments
Read more

highland park: a great place to get your guerrilla reading on, or lip synch to a medley of songs from grease 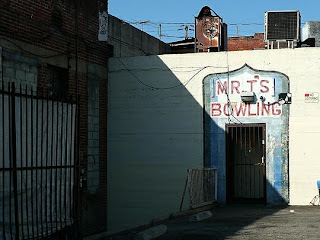 Here’s what happened after my plane touched down Friday night: I came home bleary and self-pitying and woke AK up to get some sympathy. She had a class early the next day and wasn’t feeling very sympathetic. We grouched at each other, and no one but the cats got a good night’s sleep. Then we proceeded to have a very lovely weekend. Saturday night we celebrated her mom’s birthday with a leprechaun cake (you will never meet a Mexican who loves St. Patty’s Day more than Bea Ybarra). Then we went to a drag show* at Mr. T’s Bowl. For you non-Highland Parkers out there, Mr. T’s is a former bowling alley that, according to the sign, has been around since 1966. It’s still a certifiable dive in a time and place where they’re harder and harder to come by. There are notes to the staff written in Sharpie on the plastic switchplates. There’s a fish tank behind the bar that doesn’t look clean or up to code. There are frayed wires sticking out of the wall that are all fun and games until someone has
3 comments
Read more

- March 14, 2012
I’m working in New York right now. It’s a meeting-packed trip. But the nice thing about New York is that, even if you don’t have time to see a Broadway show, you still get a show. Some things I’ve seen/heard/eaten in my first 24 hours in the city: A woman dressed from head to toe in orange-rust. Her hair was orange-rust. So was her luggage. A panhandler with a strong Nuyorican accent claiming, “It’s my first trip to America! I have no family here!” He lit up a cigarette on the subway. When someone told him he had to put it out he said, “It’s my first trip to America!” He snuffed out his cigarette, then immediately lit another. Food from a place called The Best In New York Food. I think that “The Best” is intended to describe “New York Food,” but I prefer to think of it as “The Best In New York” “Food.” I just like the idea that an eating establishment would label itself so boastfully (the best!) and so humbly (not even a diner or a deli, just straight-up food). Food
2 comments
Read more I’ve always had problems watching movies and TV shows about people at the same life stage I am. I think this would be interesting news to marketers, who seem to think people don’t read/view outside their own demographics, unless vampires are involved. But when I was in middle school, I hated watching The Wonder Years because Kevin had gotten his first kiss and I hadn’t. When I was in high school, I wouldn’t watch My So-Called Life because Angela had gotten her first kiss and I hadn’t. And so on. Therefore, I went into Friends With Kids with trepidation—but it looked sort of funny, and AK doesn’t want to see The Descendants for some reason. In a way, I needn’t have worried. As AK pointed out, it’s not so much a movie about wanting to have kids when all your friends do, or even trying to have kids, as it is a movie about having a kid with your friend and then trying to make room for romance. And it’s a good thing it’s not about people trying to have kids, because of course the
2 comments
Read more

what i read in february 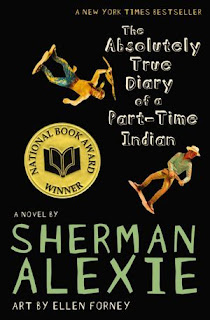 March has come in like a lion, which is not easy on a sheep-snake like me. Hence the lack of blogging (that, and my continued addiction to Polyvore ; why do I not spend all my free time applying to writing residencies and reading things by smart people?! ). Anyway, here’s what I read in February before I discovered Polyvore. A lot of it was short. Wish You Were Me by Myriam Gurba: This is a strange, great, funny little nugget of a book. Gurba writes about having Tourette's Syndrome (though in no way is this a memoir about a clinical condition), and sometimes the chapbook feels like a performance of Tourette's. In the best way--like, thank you for SAYING that! If you get deep satisfaction from popping zits and think Michelle Rodriguez is only made hotter by an eye patch, this is a book for you. Me, Frida by Amy Novesky; illustrated by David Diaz: Just as the best biopics are strategic snapshots of famous people's lives, Novesky wisely chooses a key moment as her
2 comments
Read more
More posts