Laterblog, from a July 18 journal entry.

As I write this, I'm watching mist filter through pines and redwoods and trees I have no name for. I'm staying with my aunt and cousin and their respective husbands on the outskirts of Loleta, which is on the outskirts of Eureka. "Behind the Redwood Curtain" is a thing people say up here when they're talking about how there are no good jobs or doctors.

Dash just woke up from his nap for a minute. I soothed him by taking him to the window and pointing out the trees, the mist, the propane tank, the cars on the highway, the billboard for Cheech and Chong's appearance at the local casino.

Aunt Vanessa has lived here since the seventies, when she moved here to be with Richard, her second husband. My grandmother joined her when her house was taken by eminent domain to make room for the Santa Ana City College parking lot.

I learned all these details from my cousin Maria a couple of days ago. She's been doing a ton of research on our family's history, for which I'm hugely grateful. She and her husband Al joined Vanessa and Linus up here a couple of years ago when Maria got a job at Humboldt State.

Country life seems to have been good for Maria and Al, who were the kind of people who maybe needed their lives to be a little less interesting. The first time AK met them, we were on our second or third date, and we ran into them at a Hollywood bus stop. They were wearing matching camo pants and bright yellow T-shirts. The family narrative has always been that Vanessa and Maria are fun, and Valerie (my mom), Cheryl and Cathy (my sister) are responsible. I hope that by now we're meeting somewhere in the middle.

There's nothing like spending time with family to remind you who you are, for better and worse. We are chronic apologizers, too self-aware for our own good, funny, nutty, creative. My aunt says things like "Whoever invented the term 'golden years' should be shot. It's more like pot metal--you know the stuff they make carnival prizes out of?" Linus has a green-and-yellow parrot named Baby, who eats at the dinner table and only has eyes for Linus. Vanessa said, "If I ever find an egg around here, and it hatches, and the baby bird looks like Linus...."

Maria's agenda for us included dressing up in an old family prairie dress and taking photos at the cemetery down the road.

We drove some of the back roads through Ferndale. I felt jumpy because people are not used to seeing strange cars, perhaps especially ones being driven by black men. One guy pointed a shovel at us in a way I interpreted to mean "Stay off my land or I'll shoot," but soon he, Al and Maria were reminiscing about mutual friends and old times. I am so much better at urban anonymity than country friendliness.

We bummed around Ferndale, which is still the preserved-in-amber 1890s logging town that it was in the 1980s. It still has the same musty smell and some of the same stores, including Golden Gait Mercantile, whose second floor is a collection of creepy mannequins in old-timey clothing. But now there's a WiFi network called Ferndale Free Cozy WiFi. 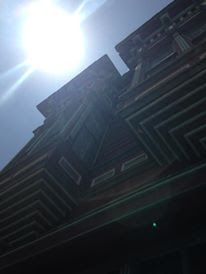 Linus comes from one of the early Danish families that founded the town. All the elders seem to be millionaire hoarders, like a West Coast Grey Gardens. There was talk of stopping by Cousin Willie's; he'd recently been arrested for dumping hazardous materials on his own land. We haven't done that yet and I feel okay about that.

songs of innocence and experience

Several people in my feed shared a news clip of Alton Sterling’s son bawling and crying out “Daddy!” I try not to be a look-away type, but I couldn’t bring myself to turn the sound on. The headline and a few seconds of silent video was enough.

I kept thinking of last year’s Homeboy Family Picnic, when a little boy temporarily lost his dad, a Homeboy trainee. The boy was maybe seven. He had a chubby face and a buzz cut; a smear of barbecue sauce had defiled his ribbed white tank. He was in tears, calling out “Daddy!”

“Who’s your dad?” asked the crew of women who quickly gathered around him.

Raul had to be nearby, playing volleyball or grooving to oldies in the shade. But his son was inconsolable, despite the women’s assurance that we’d find Raul momentarily. He sobbed and sobbed until finally he stopped and threw up on the grass.

As a kid I’d been quick to panic when separated from my parents, but this was a whole other league. This was PTSD. I knew without knowing that Raul had left him before, maybe intentionally, maybe to go to prison, maybe both.

Do you want to know what generations of institutionalized racism, poverty and the prison-industrial complex looks like? It looks like a seven-year-old crying so hard he pukes.

Someone found Raul, of course. A few months later, he was in a car accident that left him paralyzed. I heard he was having trouble summoning the desire to live. I can imagine how he might feel like life was too much of an uphill battle. You get your shit together, you leave gang life, you get a job, you raise your kid. And then this? I can’t blame him for wanting to give up. But I hope he hasn’t.

As America goes, so goes Facebook. Which is to say, it blew up. Yesterday my Parenting for Social Justice group was full of people trying to figure out what to say to their #AllLivesMatter aunts and uncles. I got into a thing on a friend’s page with a white guy who started calling Alton Sterling a thug. A black woman replied that her son and others had been harassed by police despite being well behaved and well dressed. The guy said every thug’s mother thinks her son is a good boy. I told him “Even yours, Henry” and dropped the mic no one had handed me.

Another friend posted that she wished she could give her daughter the world she grew up in, the safe one. For some reason that post in particular got under my skin. Maybe because I couldn’t dismiss it as a crazy racist rant—who doesn’t want their kid to run free in a safe world? Also because what she was really writing about was her own privilege and denial of history. She’s roughly the same age as me, and while we were kids, the Cold War was still kind of hot, we trampled through Iraq the first time, gang violence peaked, Rodney King got beaten and L.A. exploded and the McMartin preschool trial dragged innocent teachers through the mud. Just as many kids got killed and molested then as now.

But if my friend missed it, it was for the same reason I did: Our parents sheltered and cared for us, and had the ability to do so. Chances are, her daughter will emerge relatively unscathed by ISIS, police and the imaginary kidnappers that lurk behind every corner. And if her daughter fails to educate herself, she’ll grow up believing that the 2010s were a more innocent time.

I was going to tell you about our move. Last weekend we packed up the cats, the furniture, a million pairs of Cheryl shoes and a half million oversize toddler Legos and moved a mile southeast of our old place.

There are so, so many things I love about the new house, from the shady carport to the dishwasher (!) to the hot dusty attic, where you can tell it really is a hundred-year-old house.

But I think my favorite thing is the open kitchen/dining/living room area. This renovation was clearly part of its 2012 flipping. I remember learning at the Petersen Automotive Museum that you can track the role of the automobile in people’s lives by how garages got closer to the house over the years, until they became a part of it, in many cases at the very front and center. Kitchens are the same. Once upon a time, they were housed in separate buildings, mostly because they had a tendency to catch fire. Then they were kept behind the dining room, so diners couldn’t see the servants at work.

Now that most middle class families don’t have servants (because of technology, not because we’re nice), the kitchen is the heart of every party. Domestic goddesses don’t want to be lonely and isolated, and neither do I, as I cook frozen salmon in the toaster oven.

So I love love love that I can wash dishes or make tea while keeping Dash in my sightline. It’s safe, practical and homey, as all childhoods should be.

*Not his real name.
4 comments: