ode to the end of peach season

The peaches this summer were inexplicably good. The ones from Trader Joe's, I mean. Trader Joe's—known for all those plastic clamshells and sad hard oranges. But there they were, better than we deserved: ombre globes the size of tennis balls, the big soft ones that our son keeps hitting over the fence. Run-down-your-chin juicy, though I always cut them up, because why ruin something exquisite with a sticky face?

I tried to eat them all. I did. I bought them in cardboard pallets and by the bag. Accuse me of all the contemporary sins: working too much, planning and fretting, checking pandemic stats like the weather. Bending my head toward my phone until my spine is a floor lamp, an inverted J. Despairing because we might not, in fact, upgrade our wonderful lives to extra wonderful in the space of a month.

But who is here, like a motherfucking Zen master, enjoying seasonal fruit?

And now it's almost gone. Now pears are populating the shelves, and I like pears; I get why six of them plus some cheese cost $49.99 from Harry & David. Now I'm bingeing on pizza and cinnamon rolls, Cheez-Its and sour gummies. All the nonperishables in the cupboards. Late at night, when the day's worries are done and we are, for a few hours, untouchable. When texts and emails—the ones we're waiting for and the ones we dread—are silent. Only the bots are up, promising 75% off jeans for the whole family. The jeans are cheaper and better than they should be, too, but not so satisfying when I bite. And I will bite.

Each time I open the apps, I hear Mabel King sing "Don't nobody bring me no bad news." She was the witch in The Wiz, you know. A house had flattened her sister, and she would be murdered with mop water by the second act. No wonder she wanted to freeze time and accelerate it, no wonder she hoped her factory twerkers in their bright peach rags would make it all happen while she cowered backstage. Her sweatshop produced only sweat.

I'm an old witch and I know, now, how the seasons cycle. I know the time of bland bananas, our failed tomato plants, the one year in our old house when we accidentally grew so many watermelons we had to throw a party to eat them all. The chard plant that bolted—I love that word in its defiance, a reminder that rebellion is not just for predatory mega fauna—it bolted, its bright red stalk becoming thick and inedible, its leaves waving at the neighbors and covering the brick patio. 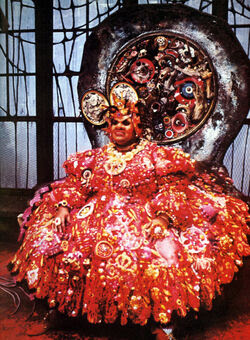 Sometimes I treat pear season as if it's a thing I can manifest: Follow all the contradictory advice of all the people who earn their living from families who want to grow beyond the limits of their own stale soil, text at the right time, keep my problems folded tight and out of sight. It's horrible, and I'm no farmer.

Other times I treat it like a storm on the horizon, like the neon orange fire moon that visits us in early fall, reminding us of the flames to the north, the choking sky, the planet burning and drowning simultaneously, a sort of apocalyptic harmony. Look, I know those peaches were picked by workers who earn $14 an hour, or $1.25, depending on who you ask.

I'm writing this as if I'm trying to stop climate change, but I'm not. I go to the store where you can refill your old shampoo bottles from a shampoo keg, and I vote, but mostly I'm trying to eat all the peaches, to manifest my own little orchard in the shape of the present I love, the present I do and don't deserve. I'm in a kind of upward-mobility paradox: This first season (which followed four and a half years of drought) worked out so well, but we can't string it out forever, we can't stop our son from outgrowing his shoes and learning swear words, and we can't make the next season in its image. It will be its own fruit, if we are lucky, and it might not be at all.

I repeat the latter, magical thinker that I am, just so you know I know. I'm not a dummy, I'm not some sort of entitled idealist who fails to imagine their demise hourly. God forbid I don't hold unhappiness and guilt like worry stones, one in each pocket. God forbid I don't get a jolt of terror every time an Unknown Number lights up my phone, that trickster brick on the kitchen counter.

This year I've seen the evil eye everywhere. Maybe you have too. It looks like the Target symbol in blues: cobalt, black, white, sky, black. Of course, it's not the evil eye at all, but an amulet to ward off the evil eye. A key difference, lost to linguistics. Why does good news feel so much like bad news? The eye stares at me from the bumpers of cars driven by Armenians in our city. They know how bad it can get, or they know secondhand. Trauma fortifies the bones and lights every nerve ending on fire.

All I'm saying is I want a peach and a pear. I want to eat them even if they are not mine to consume, with you; you are not mine to consume either, though you are as rooted as a tree. All I'm saying is all the things I cannot. Isn't every poem, at a certain point, about the failure of language? Doesn't that mean it's about genocide? Can't I have a peach and a pear, a tree and a blue-black eye watching over us all?