open letter to my sixth grade self

This story takes place thirty years from now. Can you believe you'll ever be 41? You sort of almost didn't make it to that birthday, but that's another story. In this one, two board members at the organization you work for are Hillary Toomey. They think of you as a well-intentioned flea who is not great at gala event seating. They're not really concerned with you one way or another, but in their wake you feel small and frumpy and rejected. This is how you feel every day in sixth grade. You are too tall and have bangs that don't cooperate. You make jokes that fall flat. You are gay and trying not to be, because gay is just another way of doing everything wrong.

The Hillary Toomeys of your future like your coworkers, who are Bonnie in this story. Two different coworkers represent Bonnie--both the conscientious, imaginative Bonnie who will be your lifelong friend, and the sixth-grade Bonnie, who is wooed by the opinions and charms of the mean, popular kids. You wish the second Bonnie would have your back a little bit more, but she is muddling through her own insecurities.

Thirty years from now, you will wilt, at least initially. You'll cry into your lunch in the park and wonder what the fuck you're doing with your life and why you care about things that aren't on your official list of Things Worth Caring About.

Your therapist will suggest that perhaps you care because all this work drama taps into a younger narrative. Duh. That's what therapy is all about. You will spend five or six years talking about how (spoiler alert, and condolences) your miscarriage reminds you of losing your mom to your baby sister when you were three. It makes no sense. It makes perfect sense. It is something so young that you can only feel it with your body, which might be why you spend months diagnosing yourself with diseases you don't have.

This board member thing, this resurgence of Hillary Toomey, will tap into an older young narrative, one in which you are bowled over by the injustices of adolescent power dynamics, which are also the power dynamics of the world. It feels different. It doesn't live in your body unless you count the months you spend on-and-off binge-eating, which is also a thing you will discover a year from now, when you go on your first diet as a tall, skinny seventh grader who hopes that living on 900 calories a day will make your boobs disappear.

This is your survival toolbox as a sixth grader: parents who love you, a stable home life, academic ease. Those things aren't nothing. You will hear so many stories, later, of kids in violent neighborhoods with addicted parents who experience some "small" social slight--the nice family next door pretending not to be home so the kid wouldn't crash their dinner once again--and ricochet like a bullet into the nearest gang. These are kids who wanted to be loved and popular just like you. Yet because it's 1988 and you live in Manhattan Beach, you are terrified of them. You have nightmares about gang members waiting for you on your lawn. You have a lawn.

Look, it's like the final scene in Moana, which you will watch almost every morning with your son, who says, "I was thinking just one yiddle bit Moana."

Moana sees that Te Ka, the angry lava monster, is actually Te Fiti, the green goddess of island creation. She says "This is not who you are" and Te Ka's fiery bluster fades to ash. She sees Te Fiti inside Te Ka ("the part when Moana is Te Fiti's therapist," as your esposa will describe this scene).

She can only do this because she summons the strength of her grandmother and her ancestors. The part where she sings "I will carry you here in my heart to remind me that come what may, I know the say" gets you every time, right in your green spiral ocean-heart.

In the wise words of Moana, you are everything you've learned and more, Cheryl. You are a nerd and honestly your hair still does weird things, but you are loved. Go get 'em.

the officer in charge

We said goodbye to OC yesterday. I knew him for sixteen of his seventeen years, which is longer than I’ve known anyone else in this house. He lived with me in three places prior to this one. He was the last of the pets who knew my mom. 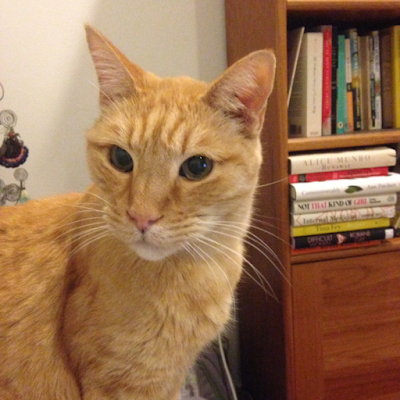 Once, we assigned jobs to our cats. Ferdinand was a DJ and Temecula was getting her PhD in neuroscience; her dissertation was titled Why Do Some Cats Talk So Much? OC was Some Cats. His job was town crier.

OC had a lot to say, and he believed that all human hands should be petting him at all times. B and I met him when, in a cage full of cats at a rescue event, he wriggled his orange nose under our extended hands. He was persistent to the point of being annoying, and endearing in his lack of guile. I could learn a thing or two from him.

He was always beta to Ferdinand’s alpha, although Ferd backed off once OC got sick; I think cats know. But he was strong as a chimpanzee, as I learned the one time I tried to give him a bath, and up until a week or so before he died, even when he was just bones wearing a fur coat, he was scaling fences. 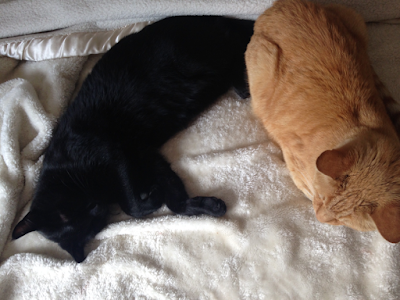 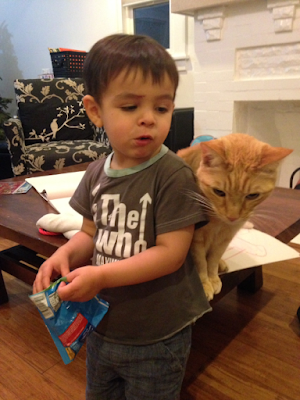 I could never pet him as much as he wanted, but he never held it against me. When Dash came along, he was the only one of our three cats not to cut and run when he saw a small human ball of energy and hands and mouth hurling toward him.

Dash adored OC and, as in any sibling relationship, was sometimes heart-meltingly sweet and sometimes hit him for no apparent reason. Since learning OC was sick way back in the fall—kidney failure, which the vet later re-diagnosed as possible lymphoma; I resisted diagnostic rabbit holes, which is a thing I’m not strong enough to do for myself and the humans in my life—I’ve wondered how to talk to Dash about OC’s death.

Dash knows my sister’s cat died, and that my mom died before he could meet her. He’s confused about whether my mom died at the vet, and whether that’s where everyone dies. After many, many conversations, he now understands that DYING is different from DIVING, because dying is when your body stops working and diving is when you jump in the water. I just hope we never know anyone who leaves this world via diving accident. You know, for multiple reasons. 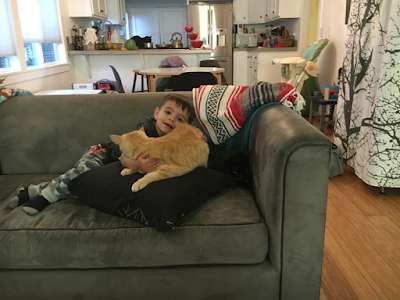 We talked about how OC was very old and very sick and would probably die soon. And also about how some cats/people are old and healthy, and a lot of cats/people get sick and then better. I asked Dash how we could show OC we loved him.

“Maybe a video?” he said, but it was a little unclear whether he wanted to make one or watch one.

I thought of a bunch of rituals we could do, but in the end time got away from us, as it does. In the end, I gave OC some tuna and sat with him on the kitchen floor and petted him and cried while Dash told us “Don’t be sad!” and AK and I told him it was okay to be sad, that we could be sad for a little while and still take care of Dash. He ran around the house and I made a video by myself, of OC licking my breakfast bowl, until my phone ran out of storage.

That’s how it goes. You do your thing until you run out of storage.

There were still many hours before our appointment at the vet, and I took Dash to the Summer Train Festival at Union Station. The specter of 2:30 pm hovered over all of it, and the crowded train station and Dash’s delight at all the miniature landscapes with model trains was extra fun and poignant. 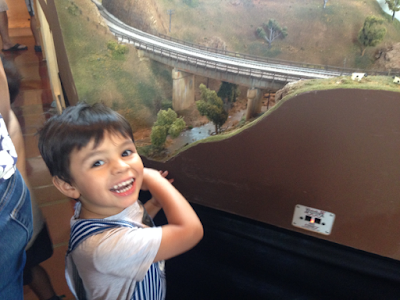 I recently read a graphic novel adaptation of Anne Frank, in which she writes about how her mother always finds solace in the fact that they’re not on the “trains heading east.” Anne observes that this doesn’t seem like a good place to fix one’s hope, because what if you’re on the train heading east? She prefers instead to look at the immovable sky.

It’s brilliant and true, but I know I am Anne’s mom in this story, appreciating my life especially in the wake of death and sadness.

We were waiting for the Gold Line when Dash announced he had to go potty, so we trekked back to the bathroom. Then he wanted to look at the fish tank and the fountain, and I stopped delighting and started resenting him for taking time away from my last hours with OC, which was unfair, because how many times had I thrown OC off the bed just because I didn’t want him sitting on my hair? I’d had my time.

I hate the feeling of not having space for things; I hate how frequently both happiness and sadness get squeezed out of my days to make room for obligations of all varieties.

Before T-Mec died, we scheduled a vet who did euthanasia house calls. Physical space is so important to cats; it seemed like one last kind thing we could do. But with OC, we hauled him into the car and drove to Lincoln Heights. Because it was the easiest thing. I cut so many corners these days. I’m sorry, OC.

Dr. Bandele was as kind as he’s always been, to OC and to us. Once he asked if OC stood for Officer in Charge (I’m not sure where Dr. B is from; I decided Nigeria at some point based loosely on his accent and the fact that I like Chimamanda Ngozi Adichie and I also like Dr. B). The first time he saw OC step out of his carrier he said, “Oh, a blond!” Today he said, “It’s hard when they’re still eating.” 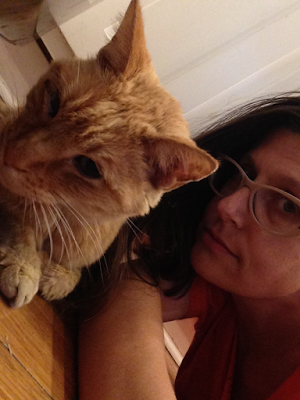 And I wondered again if it really was the right time. I don’t believe in killing an animal too soon, just to prevent my own suffering in watching them suffer. But also he had a torn cornea that Dr. B thought was causing him pain, and he seemed to get a little more tired every day, searching fruitlessly for the thing that might make him feel better. Standing in the dishwasher? No. Sitting in the cupboard where we keep the dishtowels? No.

It felt like a shrug of a decision. Why this day? Why not this day? Sometimes I feel like life is one big shrug. We love hard and we hurt each other. Things are beautiful and frustrating and terrible and dumb and silly. And then we call it. Now or later. And then we go on to whatever’s next. I think something is next, although I’m not telling that to Dash, because the concept of an afterlife is pretty confusing for someone who regularly asks if he can invite Moana to his house.

Holly, Joel, and Wendell stopped by with little succulent a beautiful, simple book about death that doesn’t assume any particular religious beliefs. Dash was a jerk about sharing his fire truck. They left and we watched The Incredibles and I put out just two bowls of cat food.
1 comment: