the microclimate in our living room

It usually goes something like this: We do our morning things. Dash starts angling to see the girls next door. If it's after 11, we walk over and knock on the metal screen. They pop up or they mosey. Change out of their pajamas or don't. Gather up their homework and shoes and spend the next two or three or five hours at our house.

They are three amigos: small, medium, and not-quite-large, ages four, almost six, and newly eight. They play post office and pizza restaurant and school and family. They whiz around on scooters and beg me to push them on the swing.

They want things: raspados and cheddar cheese slices and trips to the beach and to Dollar Tree. 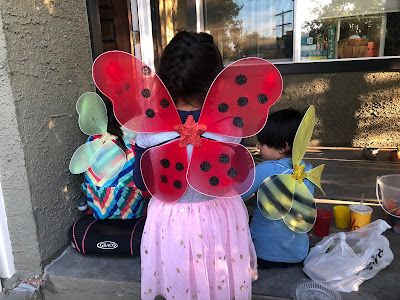 Lately, Jasmine's* wanting has felt like a current that's pushing us along and sometimes pulling us under. She gets upset if we don't all do things her way. This used to manifest mostly in the dynamics of play, typical older kid/younger kid stuff. It was frustrating, but reminiscent of how my childhood neighbor and bestie, Lizzy, used to say, "It's my house, so we have to play what I want" and also, at our house, "I'm the guest, so we should do what I want."

Now, sometimes, if I offer a trip to the park but say we can't stop at Dollar Tree to buy stickers and fairy wings and tiny erasers, Jasmine's initial excitement turns to pouting. She starts muttering about homework. If I say "Maybe a different day," she assures us that she will not be able to play on a different day. It's now or never. The other night, when she was upset about not being able to ride her preferred scooter, she said she would not be able to play again for the whole year.

Dash is loud and screamy and physical and intense. He's easily hurt and doesn't know how to deescalate. He repeats, "Are you still playing with me?" whenever there's a pregnant pause. Just to make sure. He is not the easiest neighbor or best bestie himself. But his needs are still a little simpler, and I'm more equipped to meet them.

I wish I felt less like an eight-year-old myself in responding to Jasmine. I want snap and pout and get passive aggressive. I want to yell, "I just did five fun things with you! Can you please be less insatiable?"

But as AK and I have slowly and stumblingly realized, she's insatiable because what she needs isn't tiny erasers. What she needs is more of her parents, who work outside the home all day. From everything we know--by way of observation and Spanglish front-porch conversations--her parents are lovely people. Kind and boundaried and hard working. They work outside the home all day, but they're around their kids as much as we ever were pre-pandemic. But back then, the kids had real school and after-school programs.

Now, Jasmine and Juanita have long, aching gaps in their day. They have an older brother who is a good kid, but who spends a lot of time playing video games until it's time to skateboard with his friends. They have YouTube and a kitten and us. It's more than a lot of kids have, it's less than Dash has (though they have each other, which Dash does not have), and it's not enough.

Jasmine is old enough to see that there are some class differences. We have the same number of bedrooms in our house for three fewer people. We go out of town periodically. We get weird fancy pizza, when she would prefer Little Caesars (or Yiddle Scissors, as Dash calls it). I'm constantly, cringingly conscious of these differences, and my M.O. has been to share what we can, celebrate what they have, and downplay material shit in general. 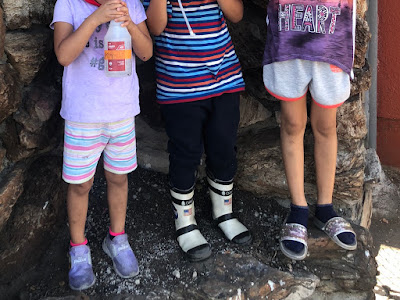 But AK has wisely pointed out that the material stuff is more of a symbol. So I'm trying to set aside my own projections. Capitalism isn't a parasitic machine of destruction because Jasmine doesn't have enough LOL Dolls. Capitalism is a parasitic machine of destruction because it pushed businesses to open at the expense of schools and dragged out the pandemic for eight months and counting, because it forces people to "choose" between working and caring for their children.

Realizing what's going on is a little like coming to understand systemic racism: It's a relief to know it's bigger than me, and it's devastating to see how big it is, and to know I'm not going to fix it, no matter how much I decolonize the language I use in fundraising materials. No matter how much I give in to Jasmine's whims or help her with her homework or make her Annie's Shells and White Cheddar macaroni and cheese, the only acceptable kind, I'm told.

It feels like it's time to pull back a little and set some boundaries. AK assures me this is best for Jasmine and for Dash. I worry that I'm a failed white savior, a Myka Stauffer returning her kid like a sweater that didn't fit.

AK is reading Jesus and John Wayne right now, about evangelical Christianity, and she said, "There's so much in the bible about loving your neighbor. The best parts are all about that. The bible doesn't have a lot to say about marriage or most of the other things evangelicals are hung up on."

I'm not Christian, let alone evangelical, but I do want to be a good neighbor. I want to invest in my community, to not see anyone as disposable. I want to do one small mutually helpful thing in this horrible fucking pandemic, and hosting J&J has been that. It's still that. It just has to look a little different, I think, and figuring out how is taking up a lot of space in my therapy sessions.

The other night, Dash said, "When you were a kid, did you have a neighbor who wasn't nice sometimes?"

I told him about Lizzy. He instantly became fascinated with her. He wanted to see a picture of her as a kid (I had none) and now (I showed him Facebook, and Lizzy's two tween daughters). He wanted to see her house (Google Maps). He wanted to know if she still had the super cool pencil box she had when she was six, which she informed me was "just for first graders." I was in kindergarten at the time.

I assured him that Lizzy was a very kind person, that her childhood bossiness had done what the girl-power books promise, and transformed into leadership. I texted Lizzy and told her the story. She said she still feels bad about being a jerk as a kid. I told her not to, that she wasn't really a jerk even then, and I thought about the time Stephanie's mom yelled at me over the phone when I was being a jerk to Stephanie. I still feel bad about making my My Little Ponies gang up on my sister's My Little Ponies. I gave and I got. It's just really hard to learn how to be a person in the midst of other people learning how to be people.

And it's not easy to teach small people how to be people, either. Especially during a pandemic in a horrifically unequal world.

At work I write about educational justice and the gaps that have grown wider during COVID like untreated cavities. I feel like I'm the gauze stuffed into that cavity. The minutae of the three-kid pandemic microclimate in our living room is my world, a product of the rest of the world that often feels so far away now.

Today I'm promising myself that I'll send J&J home after two and a half hours, max. Jasmine will probably do things that remind me of my younger self; she will probably be sweet and creative and anxious. She'll probably say things that make me want to scream, and I won't scream, but she'll hear the tension in my voice, the momentary coldness. She might sense that there's a knot in my stomach, and without even knowing it, she'll try to use that knot to her advantage, even though neither of us knows exactly what's in her true best interest. I'm trying to figure it out, because all I know is that it's not her job, and the more I let it be, the more she'll spiral.