no one is free when others are tethered

One evening back in the fall, I pushed Dash around Highland Park in his stroller. A carnival had sprung up like a cluster of toadstools in the park next to the library. The lights blurred in the fog and paint peeled from the signs on the rides and exhibitions. It felt like we were in 1992, or 1955, or 1890. The carnival was crowded with families and packs of teenagers and couples with their hands in each other’s back pockets, but I was the only white person I saw the whole time. The sense of witnessing a ghost Highland Park, a fading twin of the mixed, gentrifying neighborhood it is in daylight, was palpable and eerie. 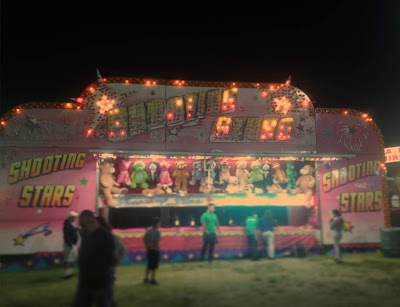 Us opens on the Santa Cruz boardwalk in 1986, when a little Black girl named Adelaide wanders into a funhouse called Shaman’s Vision and returns shell-shocked and changed forever.

In the present day of the film, it has been renamed Merlin’s Forest, presumably because we don’t appropriate Native American culture anymore. That’s all in the past, right? Adelaide (Lupita Nyong’o) tells her husband what happened that day: She saw a little girl who looked exactly like her, and she’s always had the foreboding feeling that the girl is coming for her.

These opening scenes, of Adelaide moving through her family’s sunny beach vacation steeped in dread, felt a lot like the past two weeks of my life. If you think that’s an exaggeration, you haven’t met PTSD. I had my semi-annual cancer checkup right on the heels of Molly’s death, and everything I hoped I’d left behind reared up. It rattled my door and stood in my driveway, creepy as a family of clones in red jumpsuits.

Spoilers ahead. Spoilers are how we know we lived to tell the tale. The family of doppelgangers takes Adelaide and her husband and two children hostage. Red, her double and the only Other who talks, explains in a deep, halting voice that she and her kind live underground, their bodies separate but their souls tethered to the humans above ground: the ones enjoying roller coasters and candy apples and epidurals during childbirth. Meanwhile, the Tethered subsisted on raw rabbit meat and never saw the sun. Who are these people?

The film turned for me in that moment, from a terrifying but personal tale of PTSD to a social story—more poetic, less spikily scary, but more horrifically wide-reaching in its implications.

The central metaphor of Us is that if America doesn’t face its past and present—of slavery and oppression, of carnival rides on the backs of humans whose suffering we conspire to make invisible—it will come for us and tear us down.

But here’s the twist (more spoilers): As we relive the Shaman’s Vision quest through Red’s eyes, we learn what really happened that day. The girl from the world above was dragged underground, and the Tethered girl went to live in the sunshine. The Adelaide we’ve been rooting for, the one willing to fight to the death for her children, is the changeling.

But she isn’t some evil witch in disguise. She is, basically, a kid who leaves a rough neighborhood for a good job in corporate America. She wants what everyone wants, but she knows whom she left behind, and she doesn’t have the luxury of blindness to the Tethered. Meanwhile, Red—as the once-loved child who longs for what she lost—has to be the one to lead the revolution. You can’t summon the appropriate rage if you don’t know what you’re missing.

Adelaide’s fear strikes me as a kind of survivor guilt. She knows—in her bones and blood and hair follicles—that she’s no different from the Tethered. Of course, I don’t have Molly’s blood on my hands in the way that white people have Black, Brown, Asian, and Indigenous blood on our hands. But I know that the difference between a good outcome and a life cut short is as arbitrary as a flipped mirror. I know how much of my energy and anyone’s is devoted to maintaining the fictions that say otherwise.

As in Get Out, Jordan Peele reveals the terror inflicted on Black bodies and souls as particular, visceral grief. The howling rage, sadness, and cautionary bleakness of Us feels truer than any documentary.
2 comments:

we are the coolest

The first time I met Molly in person, I was coming off a morning spent roaming the aisles at Target, contemplating the fact that, depending how you sliced the statistics, there was a ten percent chance I would be dead in five years. It was 2013.

Then I remembered that coffee existed, and I got some and dried my eyes. I sat down at Swork and waited for Molly to find me, which wasn't hard to do because I was the only bald woman in the place.

She told me her story, which is to say her cancer story, which was of course only a piece of her story. She'd reached out to me at Poets & Writers about a Poets & Writers thing, but in the process she'd come across my blog, so she added a P.S. to her email: "If you ever want to talk to someone who went through the same thing at a similar age...." And here we were, talking. About fake boobs and prognoses and the super annoying social worker who'd crossed both our paths.

I admitted: "I just feel so old and creaky and uncool."

Molly was more than a year out of treatment. Her blonde hair had grown back. She was starting a new micro fiction collective.

"Are you kidding?" she said. "I think we're the coolest."

She was so undeniably cool--the way she talked and wrote and moved through the world--that I instantly believed her.

For a few months, we were fast friends. I joined her collective and hung out a couple of times at the loft she shared with her then-husband in Atwater Village. I had some kind of art/cancer/sister crush on her. Navigating a world people tried to avoid, I'd finally found someone aspirational.

And then she slowly drifted away, admitting in an email that she was struggling with depression, which was not new for her and which her oncologist said was common a couple of years after cancer treatment. I circled back to her blog and her Facebook page now and then, looking for proof she was still healthy and hoping she'd still want to be friends. She was mostly quiet.

Then, in January 2017, she shared a long, unflinchingly honest, un-self-pitying Facebook post: She'd been living with metastatic breast cancer since 2015 and writing about it anonymously (until now) on a blog that I devoured instantly. A rich meal that made me sick even as I ate it.

She wrote beautifully. She said things I'd thought about and shared wisdom I hoped I would arrive at if I got to the point of Stage IV. I did what everyone does when reading, even about fictional people, which was to slide inside her narrative. It was a slippery and dangerous and irresistible task. I hadn't seen her in a few years and so she became Molly The Story, even as she was Molly The Writer and Molly The Person. I was mindful of all the ways it was unfair to Molly The Person to project my own fears onto her, even though Molly The Writer was aware of this inevitability and wrote about her own projections.

Death is the process of transitioning from Writer to Story, whether you are a literal writer or not. Story is a kind of earthly immortality, although I hope there are other kinds. Writers try to trick death by telling our own stories, even though most of us know we will be digital ghosts at best, not Shakespeare, not even suggested summer reading.

I'm telling you about Molly right now because this morning I saw these tweets. 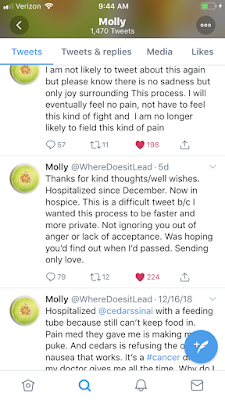 Until now, she's been the one telling her story, which is as it should be. At Homeboy and now at 826LA, we talk a lot about the power of claiming and telling your story, and it's easy to forget what what it actually means, though it is also easy to remember, to be pulled back to earth by this gut-level truth. I say that storytelling is my own religion, and like any faith, I can't quite explain it. Like any faith, it takes work. It can be lost. It can be exploited.

At this actual moment, I don't know if Molly is still alive. I feel like I'm floating and sinking at the same time. But in handing over language, she is passing the baton, making her peace with becoming story rather than teller. (We are all teller. We are all story.)

I didn't know if she would read my reply--I doubted it--but I wrote: "I think about you all the time. Thank you for showing me and others that honesty in is art. I love you."

Then I saw my typo and corrected: "*honesty is art."

Her probably-final tweet contained typos; she was a meticulous person and a methodical writer, and I suspected she was on some heavy medications. I thought about my dumb correction, a bratty little assertion that I still existed in a world where not only did language matter, but "correct" language.

It buoys me that Molly is walking boldly into the post-language realm with love and lightness. We should all be so lucky. She described a friend who died of cancer as a "sherpa" to others, and while I'm as superstitiously, anxiously, cautiously optimistic about my next cancer check-up as ever, if I have to climb that mountain, I want Molly as my sherpa.