the signs were there 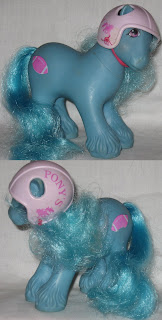 Somewhere in the Klein family archives, there is a video of me receiving a large-sized plush My Little Pony for what is probably my eighth birthday. Hasbro made these big Little Ponies for a short time, and I was excited, because I wanted them to be parents for my stable of smaller ponies. I already had a mom pony named Bowtie who was blue with pink bowties on her butt. Semi-traditionalist that I was, I needed a dad.

Later, there would be a line of boy ponies who had both the aesthetic and the professions of the Village People. They had names like “” and “Chief.” But when I was eight, was still an all-girls school. So my new large-sized plush “dad” pony—blue Bowtie’s husband—had wings and rainbow hair and long eyelashes. (I may have been a femmey kid, but the signs were there.)

My mom sewed them wedding outfits, because my parents were crazy enough to make my sister and I all sorts of amazing gifts by hand.

In the video, she says, “Since Bowtie already has 55 children, I made her dress off-white.”

All of which is to say, where rainbow ponies go, a certain amount of queering is sure to follow. I just found a link to this awesome My Little Pony comic via Bookslut—don’t be scared away by the part that says “must be 14 or older.” It’s totally safe for work, unless your boss has a thing against cross-dressing baby dragons.

Oh, my freakin' heck!
Are you kidding me with this?
More photos of your own personal collection, please.
P L E A S E ! !

i heart my little ponies! in fact i have one on my desk, her name is Flower Wishes, she is an easter pony. her bday is march, fave color: sunshine yellow, fave gem: sapphire, fave thing to do: dress up like an easter bunny. she has little easter bunny ears and a bunny's fuzzy tail on. she is sooo cute!

but i can't believe they are making ones with footballs on their butts. would boys really buy/want them? or are the boy ponies more geared towards girls? hmmmm?

PV: This pic is from Flikr, but I'm supposed to go help my dad clean out the attic soon, which I'm sure will bring about MANY My Little Pony photo ops.

C: Yeah, Bowtie was a busy little pony. But I say that in a completely nonjudgmental way.

J: I automatically like any person who knows their My Little Pony's favorite color.

Yeah, I don't think the "Big Brother Ponies" (as they were called, lest parents think they were supposed to be stallions sent to deflower their innocent daughters' virginal mares) were intended for boys. But I really hope that a few gay male children of the '80s coached whole football teams of pink-helmeted ponies.

My sister had a troll.

Oh I remember vividly on giving you Little Pony for Birthday and Christmas. I didn't realize you had collected a lot... and wouldn't that be fun to be a child once again.

That was smart to save it because I gave all of my Barbie dolls and Barbie transportation away to one of the deaf family. Now, I wish I had at least three or four of them. Oh well!

I ditto Peter to have pictures taken!

It would be tough to decide which three or four to keep. Like Bowtie, I tried not to play favorites.

ugh! my boss JUST put up a sign saying, 'no accessing sites which feature cross-dressing baby dragons as they may be offensive to some'. i'll have to read it from home.

Jerk. That is anti-dragon discrimination.