This is Patty, the homemade platypus who served as a visual aid for my third grade animal report. Yeah, I was one of those obnoxious kids who always had great school projects and Halloween costumes because my parents were crafters. They were careful not to cross the line between helping and doing--I made the patterns for Patty's feet and bill and probably stuffed her--but I wasn't exactly an ace with the sewing machine at age eight, you know?

My children will not be so lucky: It'll be store-bought plastic super hero costumes all the way unless they can convince one of their crafty aunts to take pity on them. But as I wisely noted myself in the short story "Why Wasn't I Invited?" life isn't fair. 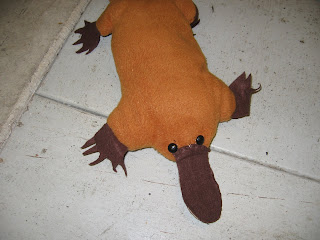 I'm also posting pics of some other items I found while going through the attic at my dad's house. Please note: I will have irrationally violent thoughts toward any commenter who makes fun of my ponies or stuffed animals. I know for a fact that they all have feelings and can talk after I leave the room, and if you're mean to them they will cry and I will hurt you.

The clothes (and me) are fair game though.

This is Barnacle, one of the aforementioned boy ponies. 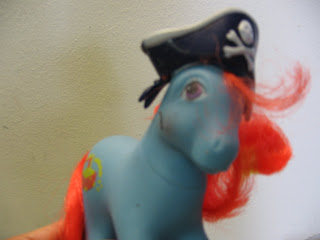 This is Clover, the second pony I ever got. Even though she's wearing a dress here, she was kind of a tomboy. In retrospect, I think she was gay. Possibly Applejack too, although she could have been one of those sporty straight girls people are always wrong about. 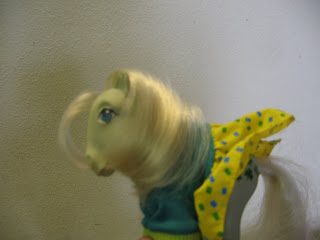 This is Tumbleweed and Milkweed, from Hasbro's "newborn twins" line. Because they came in pairs, it took me forever to save up the $10 needed to purchase them. On the way to Kaybee Toys, I remember telling my mom, "I'm so excited that my eyebrows won't go down."

(Also note: All these photos were taken in my dad's garage, which is why it appears that the ponies, turtles and platypi are being held for ransom in some sort of dank interrogation bunker.) 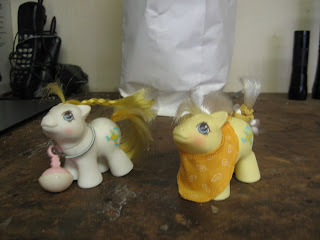 When I was no more than a couple of years old, my dad started telling me stories about the tortoise he'd had as a kid. When my mom made me a beanbag turtle, I named him Butchy after my dad's childhood pet. My mom later sewed him a wife, Berry, and daughter, whom I named Bud. Yep, Butchy, Berry and Bud. Just your average gender-bending nuclear turtle family. 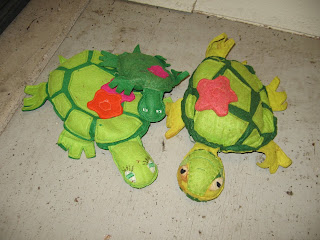 In seventh grade, I should not have been allowed to leave the house. 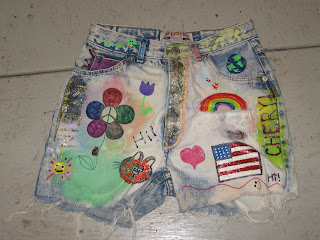 Actually, make that fourth through seventh grade--the puffy paint abuse started early on, when Bonnie and I visited the T-shirt-painting booth at the Old Hometown Fair. If I remember correctly, her shirt said, "I like Pee-Wee Herman!" 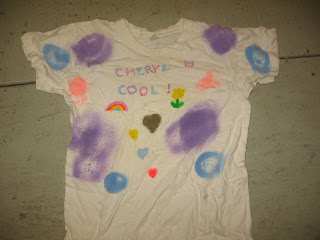 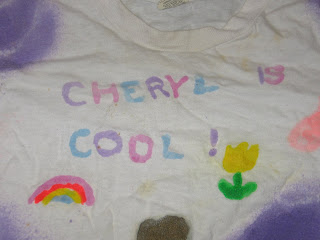 That is not a boy pony. That is an FTM!

This was utterly and thoroughly fulfilling, THANK YOU.
I was in heaven over the platypus and ponies (especially the adorable twins), but I lost it when I got to the painted denim shorts, in a fit of uncontrollable giggles!
The eyebrow line is perfect for describing how excited you feel when you're a kid.
Any photos of these fantastic Halloween costumes available?

PV: There must be photos somewhere of me as a flower, turtle, Olympic gymnast, veterinarian, palm tree and pied piper (all but the last were award winners, and I believe I was cheated out of a ribbon that last year).

My dad will be so happy that this blog is a catalyst for more cleaning.

I agree with T-shirt:
CHERYL IS COOL!

You have made me wonder where my MLPs ended up - I also had the cloud which you could fill with water and then wash the ponies through some vaguely effective sprinkler system.

The rainbow waterfall! Which came with Sprinkles and her duck sidekick, Duck Soup! It was no Lullaby Nursery, but it was pretty awesome.

That platypus is outstanding! It's almost as cute as the real thing. Now I want a platypus more than ever!

*crickets chirping* Dude, I am at a loss for words. Seriously.
*smiling and shaking head slowly*

Thanks for the visuals. They are beautiful...lucky you with the crafting parents! And those shorts!

J: Thanks. I know, I want a pet platypus and a pet sea otter for it to play with.

T&D: I don't think words are necessary--I think the shorts speak for themselves. Specifically, they say, "Cheryl" and "Klein" and "Hi!"

Those shorts leave me... speechless. In a good way!

barnacle pony: so excellent. and yes, cheryl IS cool! [tulips and raimbows]

J: The scariest part is, at some point I must have actually worn them.

V: I like how I took the time to make each letter a different color. Because that's just how cool I was.

If I remember correctly, her shirt said, "I like Pee-Wee Herman!"

i would kill to see that shirt. i would pay 100 bucks on ebay for it.