a movie to see, a review to read, a date to save—dude, you are so busy! 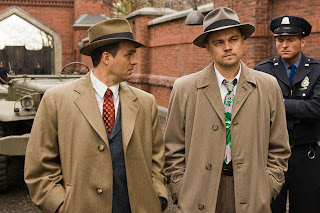 AK and I saw Shutter Island Friday night at the Landmark Westwood, partly as an excuse to eat sugar donuts with lemon custard* at the Westside Tavern downstairs afterward. It was a great old-fashioned melodrama, complete with weather that mirrored Leonardo DiCaprio’s character arc, Patricia Clarkson as a fugitive in a cave (I’m happy to see her wherever she’s hanging out) and some Hitchcockian twists.

Well, one Hitchcockian twist, which required you to completely suspend any contemporary knowledge of how psychology actually works. Apparently people sometimes just snap out of mental illness? And apparently mental illness amounts to one generic brand of crazy, which can involve hallucinations, amnesia, violent outbursts and whatever else is necessary to support the plot?

Whatever. I loved it. It reminded me a little of Changeling, another retro mystery. But Shutter Island also enabled me to put my finger on a new movie pet peeve I have, which is that whenever the story revolves around a child in trouble, ninety percent of that time the child is a girl. (Changeling is in the minority, maybe because it’s based on a true story.) Leo’s character (semi spoiler alert-->) had three kids, but the only one who gets any face time is his daughter. He has to save her! Because girls are so much more victim-y and helpless! A six-year-old boy should just man up and defend himself.

See, this is why feminism is for girls and boys.

Speaking of writing, I’ll be reading—not from Lilac Mines, believe it or not, but entirely new stuff—March 26 at the TempoRoyale gallery as part of a very cool multi-media project curated by my friend Miah Jeffra. Seven p.m., 2619 Wilshire Blvd. More info later, but save that date now.


*I love a dessert that feels the need to include “sugar” in its name. You know it’s not going to be the normal amount of sweet, but rather a Cheryl-pleasing amount of sweet.

It sounds like you have been watching many movies lately. The second movie you saw, Changeling sounds so good to me. I enjoy watching any true story movie. It is very interesting how the father shares his point of view in boys "should be a man and defend" while girls " are much victim and helpless" despite of the ages.

It sounds like you are doing quite well reading out to others. Have fun!

Definitely add Changeling to your Netflix queue. Although I have to imagine that it would freak out any parent a bit, since it's about a kidnapping.