in praise of oddity, crap and unpredictability 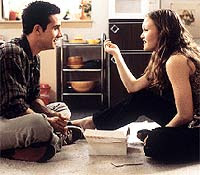 AK and I were on the walking part of a run when she said she would love for our book club to read a Jennifer Egan book. “Nominate it!” I said.

“But her writing is so odd,” AK said. “I think she’s great, but I don’t know if other people would like her.”

The first book I forced on our group was The Last of Her Kind, which I thought was beautiful: sprawling and social but also deep and personal. But I think at least half the book club saw it as a bunch of girly hand-wringing. I didn’t really care. Book club is one of my favorite activities, comprised of some of my favorite people, so you’d think I would want them to be happy. But sometimes I forget that most people don’t have the same philosophy about reading as I do, which is that the goodness of a book is just one of many possible benefits of reading it.

Every book has the potential to tell me something I don’t know about language and the world, even if only by negative example. Same goes for plays and movies. A long time ago I saw this terrible romantic comedy called Down to You with my friend Mel. Afterward I made so much gleeful fun of it that Mel (who had sweetly girly taste in movies—he might have liked The Last of Her Kind) started to feel sheepish about choosing it. I realized I’d been implying that I regretted seeing it, which is almost never true.

All this makes me sound very open minded, and I like to think of my artistic appetites as limber, voracious and eclectic. But the other side of it is that I just like to finish stuff so I can have an abstract feeling of accomplishment. (I learned from Andrea Seigel’s blog that this is called unit bias. What cognitive biases are keeping you down [although if you’re like me, you’re secretly proud of them]?)

I did manage to pick up and put down Remembrance of Things Past a few months ago, but dammit, I will stick out a bad Julia Stiles movie and I will gladly delve into an odd novel. Then, at parties, I’ll be the person who can talk about obscure-ish literary fiction while proving how down to earth she is with her knowledge of pop culture.

When I was in Hong Kong a few years ago, I saw a sign on one of the trains advertising, “A different ride every time!” Unpredictability is the exact opposite of what I, and I think most people, want in a mode of transportation. But other places, it’s great. Americans are a busy, demanding people, but trains aside, we don’t want everything to be vetted by Oprah or whatever god is in charge of packaging culture, do we? Steve Martin and NPR (via a couple of friends on Facebook) recently reminded me of that: http://www.npr.org/blogs/monkeysee/2010/12/03/131750301/steve-martin-isn-t-predictable-enough-this-is-why-we-can-t-have-nice-things.

even though i only read the first paragraph of this post, i promise to go back and read the rest, but i had to respond this very second.

totally recommend Jennifer Egan. i read her book The Keep, loved it! and i think your book club would love it! i haven't read her latest but would like to.

don't know if you knew this, it wasn't mentioned, but Jennifer Egan's latest book is an exploration of Marcel Proust's Remembrance of Things Past.

has Ak read anything by Egan? after i wrote my first comment i just thought maybe AK has already read her. so me saying go read her is a bit redundant. but in my humble opinion, every book club should read Egan at some point.

i wish i was in your book club. but it's prolly a good thing that i'm not in one, because i'm afraid i would dominate it. i'm a bit of a book bully. but at the same time, i do like to be exposed to new and exciting books.

Yeah, AK has read a bunch of Jennifer Egan. She's on my to-read list, but damn that list is long.