the devastating effects of happiness narratives, or: this movie knows me 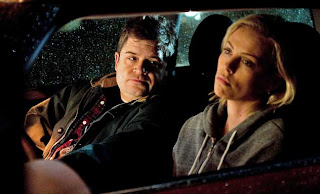 Movies about misunderstood artist-types finally breaking away from small-town hell and following their dreams are outnumbered only by movies about career-obsessed shrews who rediscover the simple charms of their hometowns.

Together, the genres seem to encourage the following narrative: In order to live a perfect life, you should grow up in a small town, hate it, escape, build your fortune in the big city (where you are most likely an editor for a glossy magazine), feel something is missing, return to your hometown for reasons beyond your control (funeral, etc.) and run into your old boyfriend. From there, the options are 1) settle down with him and make babies like a good girl (but one who already has an amazing résumé under her belt), or 2) see how good he is with his surprisingly cool new girlfriend, leave him to his new life and settle down with the hot, quirky, intellectual funeral director you just happen to have been flirting with throughout, and make babies like a good girl.

The Surprisingly Cool New Girlfriend is a new-ish type in movieland, different from the Manic Pixie Dream Girl but not unrelated to her. She’s been invented to help us understand that women should not have adversarial relationships—just one of many things women should not do if they want to live the aforementioned perfect life.

Leave it to Diablo Cody to subvert a genre that was only just solidifying. In Young Adult, Charlize Theron follows the above narrative up to the last fork in the road, at which point she comes to understand the stupidity of the various narratives we cling to. (This is subtly underscored by the clips of Keeping Up with the Kardashians and other reality shows she watches throughout—TV shows in which messy real lives are edited to make neat stories.)

But let me be clear: The way Theron’s YA-writer character, Mavis, becomes enlightened to the pitfalls of narrative are anything but redemptive. She’s a little too obsessed with high school and her ex, but when she moves on, it’s not for something better. It’s not really even moving on. It involves a humiliating scene a la Bridesmaids that explains part of her obsession, which I won’t give away here. Suffice it to say that when we left the theater, I told AK, “This movie knows me.” She said, “I think it knows all of us.”

The movie is a lovely, holiday-time Fuck You to the Surprisingly Cool New Girlfriend, our own bitch selves whose big-city glamour jobs actually sort of suck, and the notion that anyone’s life doesn’t.

There are lots of great little moments that made me laugh, like when Mavis is lying on the bed and her Pekinese runs across her chest, making her utter a helpless oof. Also great: Patton Oswalt subverting the Cheerful Gay Best Friend role as a classmate who was permanently disabled after being beaten by a bunch of hater jocks. He is not cheerful, and, in fact, he isn’t even gay, making him not a noble hate-crime victim but, he says, “just a fat nerd who got his ass kicked.” His rival is Mavis’ cousin, whom he calls the World’s Happiest Cripple—a super-fit guy in a wheelchair who plays a mean game of pool and is celebrating his sixth anniversary with a presumably amazing girl. Yeah, fuck that guy too.