“Our men suffer from a peculiar crisis of masculinity,” writes J.D. Vance in Hillbilly Elegy, his memoir of growing up in a Rust Belt town inhabited by economic migrants from Appalachia, “in which some of the very traits that our culture inculates make it difficult to succeed in a changing world.”

I imagine New York agents and editors sending his manuscript around in emails sprinkled with “zeitgeist” and “the white working class” and “fresh, underrepresented voices.” I imagine them filling an unspoken quota that demands more work by conservative writers (Vance claims a conservative identity, although the book is only lightly political).

If that sounds like an ungenerous impression, it’s because the book doesn’t quite accomplish what it explicitly sets out to do: represent for an economic and cultural underclass, and offer some loose suggestions about what this group needs, and why the rest of the country doesn’t understand. As a memoir, it’s not poetic enough to fully reel me in; it’s written in the style of a very good college entrance essay, with Vance frequently interrupting his own narrative to ponder why his little Ohio town sent no students to the Ivy League, where he would eventually land in law school. (My own public high school in upper-middle-class Southern California sent one student to Yale and maybe one to Stanford. The vast majority went to community college; a fair amount went to state schools.) I’m not sure why Ivy League attendance is so highly privileged a barometer of success or failure other than the fact that he eventually went to Yale, after a stint in the military and a bachelor’s degree from a state school.

As a sociology text, it’s even less successful, tossing out a handful of stats and footnotes about the economic prospects of his region, as if they might accomplish what his storytelling alone cannot.

The book is most moving when Vance is simply writing about his family, which is threaded with violence, addiction and love, and when he admits that success born of hard work doesn’t pave over the scars of his upbringing.

He writes adoringly about Amy Chua, his professor and author of The Battle Hymn of the Tiger Mother, and I’m assuming she was his path to publication (insert sour grapes here). This memoir more or less advocates for tiger-mother/bootstrap methods; Vance sees “too many young men immune to hard work” in his midst, although he doesn’t view them entirely unkindly. The problem, he says, is that they are taught that their choices don’t matter.

Vance’s peers, he says, are the ones who thought Barack Obama was a Kenyan-born Muslim. They were wrong, he says, but this belief shows how “alien” he is to them. The implication is that Obama might be a good guy and a Christian after all, but he and his cohort have somehow failed Vance and his, as opposed to the other way around. Apparently it’s Obama’s job to lean in.

2. i might make the woke olympic team, but i wouldn’t medal

I’ve been wrestling a lot with my identity as a white person since the election. When I read words like Vance’s, I feel frustrated with fake victimization. America has failed his people because it fails all poor people, and some of those people are white. But I don’t think it has failed anyone because they’re white.

Then I see a million memes and shallow first-person articles about how too many white women voted for Trump, and I feel kind of defensive and #NotAllWhitePeople. Emily Nussbaum, TV critic for the New Yorker, tweeted recently that she had read 300 think pieces about working-class Trump voters but zero about the large numbers of rich people who voted for him. It’s as if wealthy white men—the demographic Trump will best serve, and which probably voted for him at the highest rate—are either beyond help or beyond reproach, so let’s shit on the less privileged people who voted for him.

I figured out what was tearing me up—besides my general fear for our country’s future—in a Facebook conversation with my friend Courtenay. She posted some examples of white people centering themselves on Twitter, responding loudly to calls by POC to not do that by doing exactly that. Essentially a bunch of white people saying “Ugh, white people!” at the top of their lungs in hopes of performing perfect allyship and proving their own innocence. 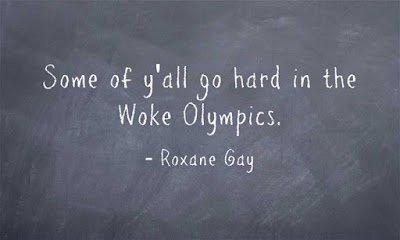 Roxane Gay recently tweeted (in response to comments that she had made assumptions about a stranger’s gender and sexual orientation) “Some of y’all go hard in the Woke Olympics.” Yes, that. The Woke Olympics. I feel both the desire to win it and exhausted by its existence. I feel how it’s a cerebral exercise that takes over my consciousness and tramples my humanity. That’s not the same as saying “I’m so tired of political correctness,” because this is about competition between a bunch of people with roughly the same politics.

Anyway, when I shared some of this stuff with Courtenay, along with my own need and failure to just sit down, shut up and listen, she wrote:

“Many white folks have anxieties about not being heard and not being included because they—especially women—experience this phenomenon all the time everywhere. But learning to how to sit with that discomfort in a situation that is not about them and to remain an active listener when their presence is not a necessary component is important, I think.”

So yeah, I think that’s my thing. As a woman, a queer person, a nerd, an introvert and—most of all—someone who spent several years recently trying to own my grief and pain and the ways that life maybe hasn’t been one hundred percent easy on me (though still at least 87 percent easy), I’ve struggled to speak up. But I’ve done it, and I’m proud of that. I finally learned to be the drama queen I never thought I deserved to be.

My challenge, then, is to hold onto that while being smart enough to know the difference between writing and speaking honestly about my own legit struggles without, like, running off to Standing Rock and declaring myself Leader of Indigenous Peoples.

On Thanksgiving night, AK, her sister and I saw Denial, in which Rachel Weisz plays a pleasantly unlikely heroine: a Jewish academic who doesn’t always know when to stop talking (in an unglamorous Queens accent). She writes about Holocaust deniers and gets sued by one of them for libel. She learns that in the British court system, the burden of proof is on the accused. Infuriatingly, she and her legal team are tasked with proving not only that the Holocaust happened, but that her accuser thinks it didn’t and willfully manipulated facts to serve his own anti-Semitic agenda.

The movie does a beautiful job of dramatizing a story that is largely procedural and which takes many turns for the anti-dramatic: the crux of Weisz’s struggle is that her team doesn’t want her or survivors to testify. “Telling your story” is a big part of the healing process, not to mention American ideology, so being told to be quiet—to deny herself—is almost blasphemous. Trauma is being made to doubt everything about yourself, including whether it happened at all, whatever “it” is. Genocide. Rape. Even something as comparatively small as, say, a miscarriage.

But Weisz’s lawyers are right that the Holocaust-denying historian in question doesn’t deserve her words, and he definitely doesn’t deserve attention from survivors who’ve already lived through hell. He is a fire, and he must be smothered.

I’m looking to the movie as a reminder that there are ways to speak up and stay quiet at the same time. I’m also trying to remember that the fire currently finding oxygen in our country—the neo-Nazis and those who support them in whole or part—needs to be snuffed out, for sure, but that the people who are spreading it are still people.

When Fr. Greg first started working with gang members at Dolores Mission parish in the eighties, Homeboy Industries wasn’t some cool nonprofit being courted by a new documentary crew every day. Gangs were seen by both law enforcement and the communities they victimized as every bit as evil as the so-called alt-right. Fr. Greg said then and now that there is nothing good about gangs, and he doesn’t work with gangs; he works with gang members, who are human and inherently good.

Anyone who engages in hate is coming from a place of deep hurt. A neo-Nazi “men’s rights” dude typing and voting his anger from his mom’s basement isn’t any worse (or better) than a gang member shooting at his rivals. Neither activity should be given an ounce of credibility or glamour. But both practitioners are worthy of hearing, and if we listen long enough, I’m sure we’ll discover that they’re not pissed at the people they think they’re pissed at. Hopefully they’ll learn too.

If you have a minute, I'd like to introduce you to my blog "Emily's Virtual Rocket". This is a serious newsblog with a special emphasis on transgender issues. Almost every day, the newsblog is updated, so you can read the very latest. In addition, I have covered news critiquing Donald Trump.


I hope you find this interesting. Please paste the following:


Thank you! By the way, Happy Hanukkah, Merry Christmas, and Happy Kwanzaa!

The more you shall honor Me,
the more I shall bless you.
-the Infant Jesus of Prague
(<- Czech Republic, next to Russia)

trustNjesus ALWAYS, dood,
and wiseabove to Seventh-Heaven...
cuzz the only other realm aint too cool.
God bless your indelible soul.

The more you shall honor Me,
the more I shall bless you.
-the Infant Jesus of Prague
(<- Czech Republic, next to Russia)

trustNjesus ALWAYS, dood,
and wiseabove to Seventh-Heaven...
cuzz the only other realm aint too cool.
God bless your indelible soul.