Every few months, a shoebox appears on the reception desk at Homeboy. It’s covered in paper printed with grainy photos. Sharpie or ballpoint pen explains who died: someone’s mother or brother or homie. A few times it has been a trainee, although never one I knew personally. Once it was a baby. Rarely is it anyone over fifty. There’s a slit in the top of the box for folded bills.

At this year’s mandatory open-enrollment meeting, our insurance brokers talked about HMOs vs. PPOs, inpatient vs. outpatient, FSAs and co-pays and preventative care and cancer. Everyone watched with glazed eyes. When the brokers got to the life insurance section and mentioned funerals, the room buzzed. Everyone knew exactly how much a funeral cost. 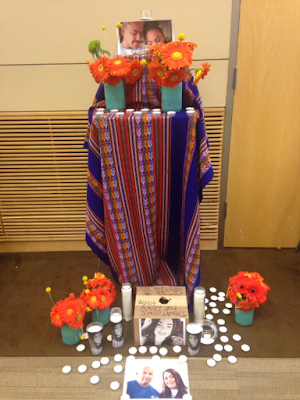 I didn’t know Roxy well, but I didn’t have to ask “Which one was she, again? Did she work in the bakery?” The first thing I noticed about Roxy was that she was beautiful—like undeniably, Disney-princess beautiful, with big dark eyes, dimples and long straight hair. That kind of beauty can be a blessing and a curse. I mean that in a general way, because I don’t know how it was for her. The only time I interacted with her beyond hallway hellos was when I wrote a letter to a landlord to provide a counterweight to her bad credit. I explained that she was a single mom to three kids who were thriving, who would love to play sports in the park near the apartment building. She struck me as sweet. She talked about escaping domestic violence and gaining confidence.

I was already in a weird, antsy mood on Monday morning when I heard someone sobbing. And then many people were sobbing in stereo. Someone said, He killed Roxy. He shot her. And then Roxy was a face on a box. 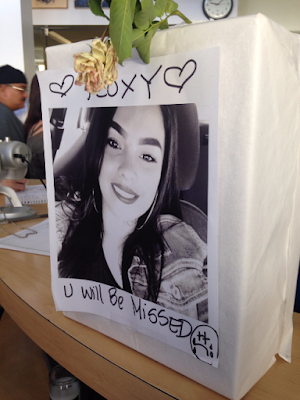 People talk about trauma fatigue, but I’m not sure I can claim that. I’m not a therapist or a case manager; I was friendly with Roxy, but we weren’t friends. Instead, I’ve spent the week in what I’ll call a third-responder fog. Because there are plenty of other variables in my life, I can’t tell whether I want to leap out of my skin because I’m outraged by injustice or because I’m petty and unable to count my substantial blessings. All I know is that when a male leader shushed me and another woman in a meeting yesterday, I wanted to punch someone in the face or cry or both.

When you’re a third responder, you feel like you’re getting smaller and smaller with every word you don’t say. You wonder what you’re even doing here. You can’t tell whether you’re wondering that because a woman was shot by the man everyone knew wanted to shoot her, or because you want a nice life where meetings start on time and people return emails.

“There are deaths and then there are deaths, you feel me?” one of the homies said today. A guy who mentors others and has a lot of wisdom. “Everyone—guys from different neighborhoods—are saying what they’ll do to this fool if they find him. So I tell ‘em, don’t go to the vigil, don’t put yourself in that situation.”

I’ve been wrestling with some existential questions about my work, trying to find a balance between seeking out my tribe and changing the definition of what a tribe should be. Am I a person reshaped by trauma, who belongs on an Island of Misfit Toys? Am I writer and an introvert, who belongs with other writers and introverts? Neither? Both? Should I STFU because it’s a luxury just to have such a crisis?

Monday night I drove to therapy, where I was grateful to spill it all. When I pulled out of the parking garage, the needle on my gas gauge was at the bottom of the yellow warning section. My wallet, I discovered, was at home. All I had was my checkbook, and the guy at the gas station predictably looked at me like I was a weirdo.

So I called my sister, and she and my dad drove to Westwood and put gas in my car and bought me tacos next door. Because I do have a nice life, and people to catch me when I fall. The sky was pink and orange by the time they arrived. The palm trees and wires were Kara Walker silhouettes.

I would recommend my profile is important to me, I invite you to discuss this topic... National Graham Cracker Day