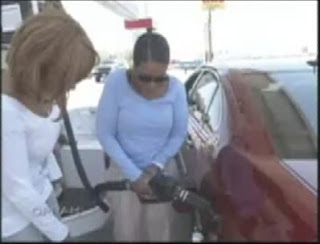 Yesterday after work, I pulled into the Chevron station near my office. When I got out of my car, the woman at the pump in front of me said, “Excuse me, do you know how to make it so the gas just keeps pumping and you don’t have to hold the nozzle the whole time?”

She was in her mid-40s, nicely but not fancily dressed. She had no accent that could be traced to a country where no one drives. So it seemed unlikely that she was either too rich or too poor to have ever pumped gas.

I said, “Maybe something’s wrong with it. I can try wrestling with it if you want.”

I hooked the nozzle into the tank, pushed down and clipped the lever back. It worked like it always does. The woman thanked me and I felt like a hero.

“My husband usually does this for me,” she explained apologetically.

When I told AK the story, she said, “Hi, Oprah.” Although that was my natural reaction too, I’d recently read a chapter of my friend Cara’s novel, in which the 18-year-old narrator, on her own after a nearly abusively sheltered childhood, feels lost and frustrated while trying to get gas for the first time. She doesn’t know how to pay or which buttons to press or how to work the pump.

Reading it made me flash back to my first time getting gas—I was 19 (I was a late-blooming driver), and my sister was with me in our parents’ Suzuki Samurai. I put the nozzle in over and over at all different angles, but the pump kept shutting off.

I was too embarrassed to ask for help—this was the sort of thing that competent 19-year-olds were supposed to know how to do—and Cathy, who was 16 and license-less, was no help either. She went through the motions of sympathy, but it was clear from her face that she knew this wasn’t her problem, and that made me madder than anything.

Eventually I must have managed to put enough gas in the car to get home, but to this day there are all sorts of things I should know how to do but don’t. Nevertheless, I was pretty proud of myself after the following conversation with our office building landlord this moing:

Dr. Temkin: Did you notice that the light in the women’s restroom keeps going off?

Me: Yeah, I saw that it was having problems.

[Calling the landlord is one of those skills I mostly don’t have, though that’s more about laziness than anything else.]

Dr. Temkin: All the women keep complaining that the motion sensor light goes out on them every 15 seconds.

Me: Oh—yeah, well, I’ve just been tuing it all the way to the ‘on’ setting instead of ‘auto.’

Dr. Temkin: You’re a pragmatist, then.

Who me? Although I pride myself on being generally low-maintenance, I’m pretty sure Dr. Temkin thinks of Jamie and I as Those Ditzy Girls In Suite 211 Who Always Complain That The Building Is Too Cold. But in the space of two days, I’ve pumped my own gas, reset a fuse, pragmatically adjusted a faulty light switch and unloaded three trash cans full of paper at a recycling center deep in the industrial section of the city. There’s hope for me yet—maybe even for Oprah.

Good for you! For a while, I was psyched out by the gas lever thing, but only until I realized some of the pumps had the notches for it to rest on and some didn't at the station I used. Sneaky bastards.

"but to this day there are all sorts of things I should know how to do but don’t."

I confess I just started reading a book called: The Girl's Guide to Absolutely Everything. It's target audience is really post-college 20s, but I'm going with the better late than never outlook. :)

I'm wary of books that begin with "The Girl's Guide," but that sounds like it might be a useful one. Now that I'm about to turn 30, it's high time I learn how to do what other people learned right after college.

I guess I never had a problem with pumping the gas ... I must be a natural! :)

However, I did have to SERIOUSLY think through which way to flip the turn signal while driving.

I would have a heart attack if my husband pumped my gas! Heart. Attack.

Once, I was at a gas station where I couldn't pay at the pump. I didn't know what to do. I mean, how do I know how much it's going to take to fill my tank? My male friends in the car called me Paris Hilton for the rest of the day.

I can relate to this... I was born and raised in NJ, which is a state where only gas station ATTENDANTS can operate the pumps. When I got married and moved to the other side of the Hudson River, I was just as lost, trying to decipher the pumping process. I was 32 before I ever pumped my own gas.

Parises of the world, unite!