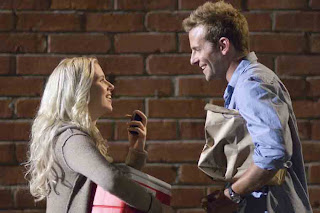 On Saturday AK and I showed up at the ArcLight at random, as we seem to be developing a habit of, and said, “What’ve you got?” What they had was He’s Just Not That Into You.

(Do you like how I just made it sound like I was forced to see it as a last resort? Like I saw it only because Waltz With Bashir was sold out? In fact, I was quite into seeing He’s Just Not That Into You.)

It’s very much a movie of its genre, which I guess is technically “romantic comedy,” but which in my head is “movie in which all hair is either perfectly curled or ironed to the smoothness of a skating rink, and all the characters more or less work as graphic designers.” This genre is eye candy not of the Scarlett-Johansson’s-tits variety (although there was that too) but of the shiny-pages-of-Vogue variety.

Except the idea of He’s Just Not… was to rip the romantic-comedy goggles right off the faces of its female viewers, right? I didn’t read the book, but I heard co-author Greg Behrendt interviewed enough times to get the gist of it. And the movie outlines the premise right from the start: If a guy really likes you, he won’t make a bunch of excuses. So don’t make excuses for him, and don’t tell yourself little urban legends about other girls who turned rocky non-relationships into happily ever after. If those girls even exist, they are the exceptions, not the rule. You are the rule.

The movie deployed all the good-movie ingredients to make this point: snappy dialogue, good pacing, good acting, even some nice gender equity. And it was well on its way to being a good movie—maybe even a subversive movie seeing as how it was out to bust the myth of its own genre—until it collapsed under the weight of that genre.

Not to give too much away, but in the end, half the girls in the movie became the so-called rare exceptions: the one who’s rejected by a guy because he really secretly likes her, the one who’s proposed to after a long non-engagement.

Ginnifer Goodwin’s character makes some bullshit observation about how having hope is more important than having self-esteem, and maybe the movie was trying to justify its own existence as the embodiment of hope. But it felt more like one of those moralistic endings tacked on to old-school pulp novels to get past the censors. Only this time the censors were the zillions of women who want to rationalize dating jerks, and also MySpace, which had invested some major product-placement dollars.

As someone who met someone to be very into on MySpace (and after almost three years, I think I can safely say she’s into me too), I can’t argue with romance. Or Scarlett Johansson’s tits. Or Ginnifer Goodwin’s adorable-ness. But I can argue with movies that wuss out at the last minute. Talk about a fear of commitment.

I'm not planning on seeing this movie or reading the book--but I just love, love, love the title. I say it everywhere. A friend tells me that a new man isn't responding. I say, He' just not into you. We didn't get funding for a project? They're just not into us. The cashier was rude to me at Ralphs? Well, I guess, she's just not into me. I think it's one of those phrases that'll stick.

Oh, man, so many funders are just not that into us! Good phrase to add to my arsenal.

Thanks for the movie review. I'm bummed that it didn't hold up to to premise of the book and title and caved to perpetuate the myth. Ugh.

You should have seen Waltz With Bashir. I loved it.

I have never noticed Scarlett Johansson's tits (*act* surprised).
Thanks for pointing them out.

U: It didn't hold up to the premise, but it was still definitely worth seeing. It was weird that way.