rockin' one room away from the christmas tree

AK and I decided to host a holiday party this past weekend because 1) all our friends go out of town for the holidays, and we get kind of stir-crazy, so we decided to front-load the season with extra socializing; 2) we wanted an excuse to decorate and bake, even though we're more Sandra Lee than Martha Stewart; and 3) we bought a new chair and we thought it needed a big debut.

Or maybe we bought the chair because we were having a party. Hard to say, but here's how it all went down. 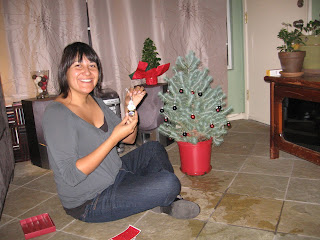 AK decked our halls with boughs of a tiny Italian Stone Pine. 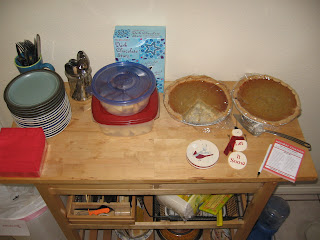 I baked my much-blogged-about sweet potato pie (with store-bought crust). AK baked cookies while we watched an amazing movie called The Exiles, a fictional but documentary-esque movie about Native Americans living on Bunker Hill in the late 1950s. Really, it deserves a post of its own, but this is a party post, so I'll just direct you here. 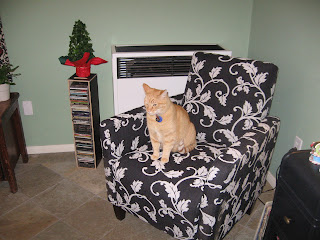 After (or, actually, before) AK and I had a brief debate about whether the cats would get to partake of the new chair, OC did. 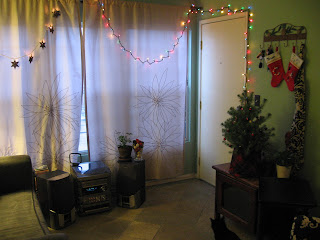 Lights put the bright in merry-and-bright. 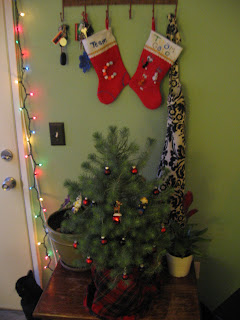 Ferdinand (lower left) put the gato in Team Gato. Stockings were hung by the pineapple coat hook thingy with care. 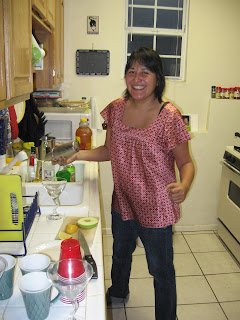 As party time approached, AK practiced her new specialty cocktails: the Grinch Martini, the Apple Snowflake Martini and the Candy Cane Martini. Bartending duty would prove to be extremely labor-intensive, but the results were tasty. 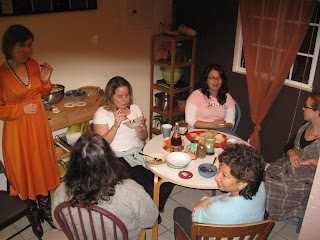 Our decked-out living room was quickly to become a sort of holiday party museum, as everyone congregated in the kitchen. That's a famous rule of human party nature, but our kitchen is really small. It was sort of like when all three cats cuddle up on the bed with us: cute, but at some point you have to break free and run to the bathroom to stifle your claustrophobia. 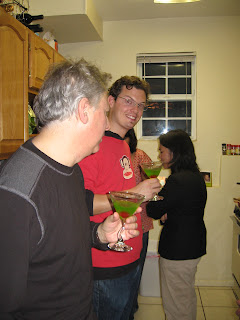 John and Lee-Roy toasted with Grinches. 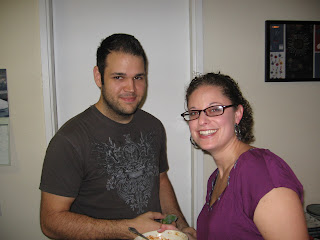 Richard and Cathy debated how hot chili should be. Richard, the Texan, thought: very. Cathy, who grew up in a house of boiled broccoli, thought: not so much. 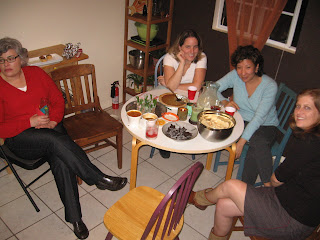 More fun in the kitchen. 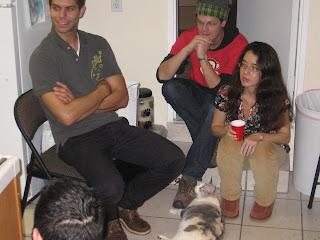 When the party died down a bit, we let the cats out of the office/cat jail, and T-Mec immediately made herself the center of attention. She was all, "Gather 'round as I regale you with tales of life on the inside. Also, are you going to finish that spring roll?"

You party looks very merry and bright! I love the decorations, too! You're way far ahead of me in the holiday festive stage of my life!

Once school's out this week, we can get around to hanging lights, let alone read and or write blog posts!

The tranquility and quiet of January seems so far away)

You can't believe how much work schools cram into that last week for the kids. It's enough to drive parents into the nut house.

But, your party looked FABUOLOUS!

I have discovered that while school always got extra crazy right before the holidays, work coasts to a nice slow stop. At least my work. It would probably be different if I worked in the ER.

Very cool chair! And I concur with Louise- very festive, merry & bright! So that's what the social kids do. ;)

Ah, T-Mec with her tales of her stint in the pokey...excellent. :)

T-Mec and AK are the only true social kids at our house. But OC and Ferdinand and I can fake it pretty well.

Ak is hot. You are, too, but I think I've already barked up that tree. Anyways, you guys are a hot couple. Just thought I'd throw that out there.

It is so good that you guys have Christmas spirits! Merry Christmas, Cousin.

God this blog has many cats! AK is your girlfriend, yes? Do you have kids? How many cats do you have? I love cats so so much!

Sorry for the lots of rambling comments, I'm just a very social and talky person and I just discovered this blog which means looking through the archives :P