confession: i read magazines because i’m an aspirational masochist 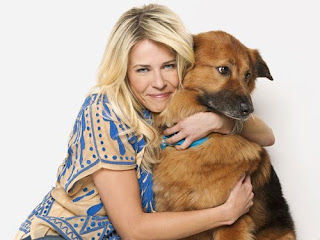 If you read my everyone’s a critic post, you can probably guess how much I loved this post on Bluebird Blvd., in which Courtenay Bluebird assumes the persona of all those magazines that profess to make us (us = especially women) feel better and usually have the opposite effect. It’s enough to make a girl want to retreat to a cabin in the woods and light a giant fireplace fire with magazines as kindling.* Except then I’d get bored and wish for something to read.

Can I make a humble addition to Bluebird’s list from my own monthly mail pile?

Hi, I’m REDBOOK. I’m a gift from your really nice sister, whose generosity you totally appreciate.

Sometimes I have refreshing, if mildly simplistic, articles about transgender issues and infertility.

But this month is my “Confessions Issue”! Juicy, no?

Well…no. Chelsea Handler dresses up as an angel on the cover, but when you flip to the inside…what’s that? A second cover, featuring Chelsea in a cheap-looking teal shift dress with devil horns! The interview is all about how, even though she’s made millions marketing herself as a boozy slut, she’s actually a hardworking businesswoman and homebody who loves her dogs. Who doesn’t love a hardworking liar? No doubt you’re feeling better about yourself already.

My health and personal finance articles are also branded as confessions. Headlines like “Confession: I haven’t seen the inside of a gym in years” are followed by shaming smackdowns about how you’ll die if you don’t exercise. Then I find a little loophole: It’s okay if you just run ten miles in a park instead of inside a gym! As if your real worry was that your rigorous exercise routine didn’t actually take place at a gym, not that it didn’t. actually. take place.

The moral of this issue, and even the confession-I’m-a-stripper-to-earn-extra-cash-for-my-family article, is that it’s okay to be quirky or even to have approximately two minor flaws, so long as you’re a good girl who never veers far from your continual forward march of self-improvement.

Did you hear me? March!!

*At first I wrote “kindle.” That tells you how far removed I am from an actual cabin in the woods, and how I feel about the Kindle. Nah, not really, but I think I’m still a year or two away from actually buying one.

LOVE this! You're totally, totally right! Redbook is odd because it's like a woman's magazine version of Reader's Digest.

That's one of those magazines that my mother read, and my grandmother read, and now that I am the target market demographic, what in the world will Redbook do to entice me?

Well, put Chelsea Handler on the cover! Of course!

Do you read Bust? http://bust.com/ It is my favorite magazine - and doesn't make me feel too old or too young or that I have too much or too little money. I just love it. Thanks for writing! JJDay

CB: My mom's mags were Family Circle and Woman's Day. I'm sure it's only a matter of time before I'm getting those too.

I have just installed iStripper, so I can watch the best virtual strippers on my desktop.