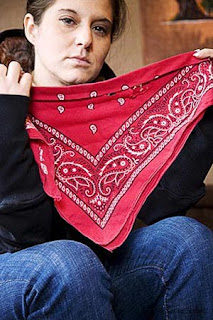 I’m waiting for someone to add this entry to the (mostly stupid, but that’s another post) blog Stuff White People Like: #82: Writing Memoirs In The Voice Of Underprivileged Youth. First there was teen truck-stop prostitute JT Leroy, a.k.a. a middle-aged woman from . I had some strong thoughts about that little scandal. Now there’s half-Native American former Bloods gang member Margaret B. Jones, a.k.a. Margaret Seltzer, a white woman from Sherman Oaks who went to private school.

Supposedly, Seltzer wrote the memoir to give voice to friends who’d actually had experiences like those she described: “I just felt there was good that I could do and there was no other way that someone would listen to it.”

Here are some tips for the would-be Seltzers of the world:

Here are some tips for readers:

Here’s a tip for gang members in the foster care system:

you're going to hate me for saying this but i really enjoyed Sarah and it didn't bother me that he was a she, etc. etc. i also enjoyed A Million Little Pieces and again didn't care that some of it wasn't true. i know i should feel pissed that people are exploiting others or stealing their lives but haven't people been doing that for years and years and years. whites have been stealing from blacks shamelessly since forever. and i'm guilty of it as well. i steal from other poets all the time.

granted i'm not pretending to be someone else... i do agree people should try and write fiction... i don't know. i guess i don't care that much. maybe we should start copyrighting our lives.

Pretty strong words--and I completely agree. I was beside myself when I heard about that. And don't get me started on that JT crap.

Oh, and Jesi, there's nothing wrong with lying--writers do it all the time. Just call it FICTION. What those people did was called it memoir or pretend to say it was true when it wasn't. It's not okay to me that someone says he's my brother, when he was some asshole milking me for money and sympathy.

Re: "White have been stealing from black shamelessly since forever." Let me guess, you're for the war, don't care about the people who get killed--as long as you can drive your car with their oil. And people wonder why we're called "Ugly Americans." Sheesh!

I love autobiographies, so I'd be pissed to read one by a faker. People should fess up to ghost-writers too, imo.

The bandana pic reminded me of shooting on location in the southside of LA. I always used to carry a bandana when it was hot out, but our AD reminded us to not wear/display red or blue there.

J: It's true that writing is an act of theft, and people can't help what they're influenced by. But I think you can be an ethical thief--like you said, by not pretending to be someone you're not, and also by championing the voices of people who don't have access to systems of distribution. I.e., I don't think it's wrong that white people started playing rock and roll. I do think it's wrong that club owners wouldn't book black artists, which meant that only white people (for many years) could get famous playing rock and roll.

N: Yeah, I can't help but think that if people didn't have such a weird bias against fiction that some of these authenticity scandals wouldn't have happened.

C: I wear bandanas of all colors when I jog; I'm pretty sure I'm way too dorky looking for any gang to want to claim me.

I love Joyce Carol Oates' THEM. Amazing.
Cheryl, your points are so clear and right. Right.
Integrity, guys. Let's go.

Thanks, Don. I haven't read that book--it's going on my Amazon wish list. :-)

btw, Sarah is in the Fiction/Lit part in the bookstore. it was never considered a memoir or non-fic. i still don't have a problem with it. sorry.

From what I understand, Sarah was originally marketed as a novel, but an autobiographical one--when it was in fact a non-autobiographical novel. Sort of a crazy thing to wrap your head around.

I don't have a literary beef with any of these books (and I wouldn't judge them without reading them anyway). They sound like pretty good reads, actually. My issue is with all the crap going on outside the pages. The great thing about books, of course, is that you can lose yourself in the narrative and leave all that behind. I just might check them out of the library instead of spending money to buy them. :-)

the library is a good thing. that's why i love working at one.

i also work in a bookstore, and we sell all sorts of crap. for example: Men are from mars, women are from venus, The Secret, Atkins Diet. i would much rather people read Sarah, or A million little pieces than that crap!

and please read Sarah instead of Ann Coulter. her books are considered non-fic and are in the Politics and Gov't section. god, how i would love to burn them.

Don't worry, Ann Coulter is not on my Amazon wish list.

I would agree with everything you say, Cheryl,but I'm not sure if my opinion is worth much in this arena. I don't generally read the kinds of novels that qualify as fiction these days. I generally find that I'm spending almost all my book finding time in the genre sections. Fantasy, science fiction, thrillers, humor, horror- this seems to me to be the places where the stories are told that I find entertaining.

You know, all this skepticism about the truthfulness of memoirs is going to make it really hard for the first autobiography by a real centaur/time traveler/vampire.

Stuff White People Like is the BESTEST BLOG EVER!

Some of it is pretty funny, but they really need to call it "Stuff Upper-Middle-Class Urban Liberals Like"--because there are plenty of non-white folks who go to grad school, and plenty of white folks who couldn't care less about their children being multilingual. I know stereotyping is sort of the whole point of it, but you have to be precise with your stereotypes in order to be funny.

Can we get a Cheryl bumper sticker that says "Fact-check Fuckers" ?
Please?