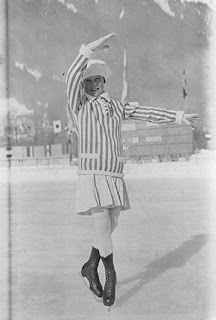 I was going to title this post “Supposedly Fun Things I’ll Probably Do Again” after David Foster Wallace’s essay about cruises, but 1) it seemed a little harsh because I probably liked the supposedly fun elements of my weekend more than DFW liked his cruise, and 2) I’ve never read the essay so I would just be a big poseur.

Nevertheless, my ultimately-quite-fun weekend did involve some moments when I thought, “Shouldn’t I be having more fun?” For example:

1. ice skating, or: more proof that i am old

[Setting: Pasadena Ice Skating Center, a cavernous rink hidden behind the Pasadena Civic Center. The walls are covered with dirty white tiles. The floor is covered with bumpy white ice. In between are hundreds of teenagers, plus CHERYL and STEPHANIE.]

STEPH: Yeah, that’s what happens when the floor gets really worn out. The grooves are so deep that the zamboni doesn’t make a difference.

CHERYL: If you want to skate ahead of me and do, like, some twirls or something, you can.

STEPH: I don’t know how to do much anymore, and besides, it’s way too crowded and people are skating like maniacs. They shouldn’t be snow-plowing, but they are. At the rink I went to when I was a kid, snow-plowing wasn’t allowed.

STEPH: That’s because we’ve been skating in the same direction the whole night. They should switch off.

CHERYL: God, those girls are so obnoxious. They’re going fast and then falling down practically on purpose and taking all their friends with them and then lying on the ice giggling.

STEPH: And that guy in the blue shirt, who works here? He’s skating like a jerk.

CHERYL: Oh my god, you’re right! He just went over to “help” that girl who fell down, but he sprayed a bunch of ice right in her face.

STEPH: This never would have been allowed at my rink.

2. les figues press benefit auction, or: proof that i am young

On Saturday night, AK and I stopped by a benefit auction at Les Figues Press, which is housed in the amazing Victorian house of its co-directors, the kind of house I fantasized about living in as a kid, full of nooks and crannies and curlicues, just like their books.

It was one of the cleverest, most creative events I’ve been to, with auction items like “Personalized Letter to Your Ex” and “Crocheted Hyperbolic Plane.” I have no idea what the latter is, but it sounds like it might save us from global warming, don’t you think?

Les Figues is tight with my alma mater, CalArts, and I was excited to see some of my favorite former professors there. But what I hadn’t taken into account was the fact that, apparently, when confronted by people I knew when I was 23, I turn into my 23-year-old grad-student self: mouthy enough in class, but convinced that I could not possibly be edgy enough to socialize with the brainy lit-crit hipsters around me.

If I made small talk about the very good peanut butter cupcakes, would they silently deconstruct me?

Should I try to deconstruct the cupcakes somehow? (“The frosting tastes more like the idea of peanut butter than like actual peanut butter, but I think that’s a mark in its favor. Ha-ha.”)

So I found myself feeling utterly shy and tongue-tied, which I realize comes across as bitchy on anyone over six. Sorry, CalArtians, for being a bitch.

And one who was still recovering from the flu on some level, so I slinked away early, but not before bidding on (and winning!) a web page designed by writer Allison Carter. Which seems pretty awesome, and, even though it’s cyberspace, fairly straightforward and solid compared to a hyperbolic plane.

What's snowplowing? And I hate those obnoxious fake falling down girls.

Snowplowing is skidding to a stop with your skate facing out so that it makes a spray of ice shavings. At least I think that's what it is. Stephanie is the expert on such things; I'm just a novice with a sore ankle.

Hey! I used to live right by that ice rink, across from (what is now) the Sheraton.
Very funny post! I LOL @ your theory about what a “Crocheted Hyperbolic Plane” might actually be.
I was convinced one or two of my college prof's considered me merely pedestrian. That wouldn't stop me from acting like an outgoing, obnoxious goofball, though, if I were to see them in public and greet them.
They're human enough to sometimes miss the toilet, too, when they pee (I'll bet).

Is that ice rink open all year round? Or just around the Holidays? You can stand on blades? Wow.

PV: They might miss the toilet, but only as part of a conceptual performance art piece.

N: I'm not sure if it's open all year round, but it's definitely a full-blown rink with a skate shop and everything, not a "let's freeze a piece of the park for Christmas" deal like in Pershing Square.

If you ever get a chance, you should read A SUPPOSEDLY FUN THING... at least that one essay. It's really, really funny, and tragic, and good.

That's what I've heard, and it's on my (very long) to-read list. I've done the discount cruise thing, and I imagine the essay would be cathartic. :-)