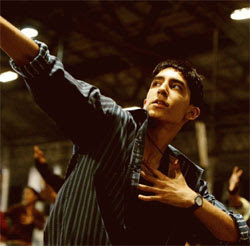 One great thing about living in the same 20-mile radius your entire life is that everyone comes to visit you over the holidays. Well, actually they come to visit their families, but you can flatter yourself, and you can usually snag them for a drink or brunch.

Hence it was a weekend of many carbs: not just pumpkin pie and dump cake and chocolate chip cookies (which I ate as if they were pretzels while we watched WALL-E) on Thanksgiving day, but cupcakes and vodka with Jenessa and her cute new-ish boyfriend, tofu scramblings with Meehan, and eggs and home fries with Mike. And I’m surprised that my stomach hurts today?

Another thing I love about this time of year is the movies. After the long dry spell of summer blockbusters, the good movies start rolling in and doing their give-me-an-Oscar dance. Milk was great—inspiring, as predicted, and nicely acted by Sean Penn and Emile Hirsch, if a little traditional for Gus Van Sant. But whatever.

Recently I’ve also dug Slumdog Millionaire, which I would point to as the kind of flawed fare that I love so much more than perfect-but-predictable movies. It’s a sort of One Thousand And One Nights for the new millennium. In this case, it’s a guy named Jamal telling stories to a brutal yet increasingly sympathetic police officer in hopes of saving his life—and the million dollars he’s on his way to winning on the Indian version of Who Wants to Be a Millionaire.

The stories he tells are of life in slums of Mumbai—life at its dirtiest and cruelest—and although they explain in a literal sense how he came to know the answers to certain game-show questions, what they really explain is how he came to be the man he is today: at once naïve and clever, scrappy and hopeful and wary. All good traits to have when venturing into Bollywood, and all layered on the face of actor Dev Patel.

So it’s too bad that his love interest, played by Freida Pinto, is just a gorgeous dolt (the kid version of her character is way more lively) and that the plot gets a little fantastical and convoluted toward the end (although maybe it’s fine that it’s fantastical).

But I was willing to forgive all of this because the movie lives so beautifully in a seething, speeding, exuberant, opportunistic, hip-hopping globalized world. It doesn’t take on globalization in the straight-up Let’s Talk About Globalization way that movies like Traffic do—it just lives it, as when Jamal starts giving slum tours to Americans, and shows that even people who live their entire lives in a very small radius (say, 20 miles?) don’t go untouched.

Throw in the song-and-dance at the end, and it really can't be beat.

Oops, that was me using C.C.'s computer again. But I'm pretty sure C.C. liked the song-and-dance number too.

For one thing, we both know that we don't see each other often , but we know it is nice to keep in touch through by blog especially living in distances.

Second, I MUST say that it sounds like you have caught so many movies up. I have been WAY TOO BEHIND watching movies. Actually, I know I am not able to stay up late any longer. Guess, I either have a choice : avoid watching too many movies with caffeine or eating so many caffeine so I can catch up the movies. :-)

I'm guilty of both falling asleep when I watch movies after 10 p.m. and guzzling caffeine so I can stay up. It's a sacrifice I'm willing to make. :-)

I'm happy to stay in touch with you via our blogs too!

Dump cake? Explain, please.
When I waited tables at the Cheesecake Factory, menu items were abbreviated on the tiny buttons of the computer/register.
I still laugh at the fact that the apple dumpling dessert was listed as 'dump.'

Yeah, it's not the most appetizing word. You'd have to ask AK's mom why it's called that, but it's basically a cross between pineapple upside-down cake and cherry cobbler. And it's sooo good. Although now I'm craving cheesecake too.