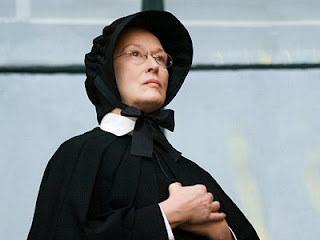 Two movies you should see.

1) Doubt: If I’d managed to see this one over the holidays, it definitely would have made my top-ten list (falling around number two or three). It’s so meaty and moral, with complex characters you want to dish on later like they’re your own dysfunctional family. Meryl Streep’s uber-moral dragon-lady nun character—who has a soft spot for little old ladies but wages war on ballpoint pens—kind of reminds me of my ex. Would you believe me if I said I meant that as a compliment?

2) Breaking and Entering: AK and I rented this 2006 movie last night, and Jude Law and Robin Wright Penn’s characters reminded us a little of ourselves in the way they dealt with their problems (or didn’t). Penn’s character got all control-freaky and Law ran away—although, AK pointed out quite fairly, “When I need to escape, I don’t have an affair. I just go to Barnes & Noble for a while.”

Fictional characters are a good entry point to talking about relationship stuff because you can see how you act from the outside. Also, you’re not having the chat when you’re mad at each other, but rather when you’re curled up in bed with hot chocolate, appreciating that you’re just mild versions of what’s on screen. You can also pretend you’re as good-looking as the couple on screen.

But even if you don’t have the same coping mechanisms as AK and I, you should see this movie—in which the robbery of a schmancy architecture firm in a rough London neighborhood causes previously parallel lives to intersect—because it captures the fallout of gentrification and globalization in a much more human and organic way than a lot of other movies. And did I mention the cast is really good-looking?

This doesn't even compare - TV sicoms - but Domestic Partner and I see ourselves in Debra and Ray Barone - he wants me to do help out more around the house, and I want more in the bedroom.
We're a little bit Doug and Carrie Heffernen, too, I'm a little ashamed to admit.

I have really wanted to see Doubt- love Meryl and Phillip. The other movie sounds good!

PV: I love Doug and Carrie! Who's who?

I was surprised at how great Doubt was. Though I heard that Cherry Jones, who originated the role, made Madame Streep look amatuerish.

I've been thinking it would be interesting to see it on stage, if for no other reason than because the movie didn't have that "hi, I'm adapted from a play" feel.