i put the cheryl klein in www.cheryl-klein.com 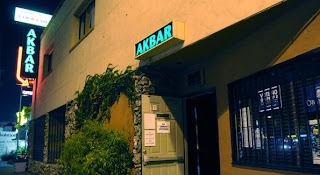 Apparently Akbar has been hosting a weekly queer-ish comedy night for three years now, but last night was the first AK and I heard about it. I don’t mind being late to the game, though, as long as I’m not too late to see Karen Kilgariff, quite possibly the funniest person alive, who performed last night.

She started by reading off the list of people who’d RSVPed “yes” on Facebook. It was a sad but hilarious roll call. Then she did a bit I’d heard her do before, but which still made me laugh so hard that if I’d attended a few days closer to hernia surgery, I could have seriously injured myself.

I love funny people. Even though I’ve heard they’re all crying inside, and even though there were a fair amount of anecdotes from, as comedian Erin Foley described it, “my 20s, when I didn’t know if I was gay and did a lot of overeating and overdrinking.” So there’s evidence that maybe they’re not models of well-adjusted-ness. Still, when I hear funny people talk, it makes me want to get over my own stupid bullshit. Always a good idea.

I’m in a good mood today. The funny people are part of it. Spring is part of it. The impending end of my exercise hiatus is part of it (I’ve treated not being able to go to the gym for two weeks as if I were a professional athlete who would have otherwise been at the gym every day—when in reality I maybe missed four workouts, and have missed many more in the past because, say, there was a Real World marathon on TV).

Also, my NEW WEBSITE, www.cheryl-klein.com, designed by the very talented writer-hyphen-web-designer Allison Carter, is part of it. Visit it. Bookmark it. Don’t forget the dash.

Your new website looks fabulous. Looking forward to buying my own signed copy of Lilac Mines.

And I totally have to do that Facebook roll call at my shows!

Dude, your website is freakin' AWESOME. How proud are you to be all dot com'd up?

Thanks, everyone. I am very proud...to have snagged Allison as my designer (I won her services in an auction, believe it or not, and unlike Angelina Jolie, she did not flake).

It is super nice.

And you KNOW I love Karen...

And bring your best buds.