suspending my dislike of suspense 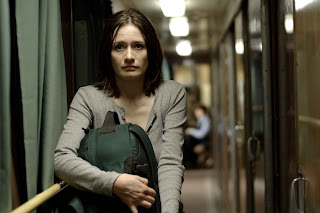 I have a complicated relationship with suspense. In movies, that is. In life, I just flat out don’t like it unless I’m on pins and needles waiting to find out just how much I won in the lottery. Except I don’t play the lottery, because [see first half of previous sentence].

With movie suspense, there are pros and cons.

Con: “Stressed-out” is not the emotion I go to the movies to feel. And suspense stresses me out. I can handle blood (unless it’s animal blood, in which case I cover my eyes and cry). I can handle sorrow. But if I wanted to feel stressed, I would just, I don’t know, schedule too much stuff to do. Oh, wait….

Pro: A little suspense will keep you awake while watching a DVD in your cozy darkened house after 10 p.m., and that is a task I most definitely need help with.

Enter Transsiberian, one of the most stressful/suspenseful movies I’ve seen in a long time. The first half is a believable drama about a couple (Woody Harrelson and Emily Mortimer) taking the train from Beijing to Moscow. There’s clearly something up with the couple they befriend, a bad-boy Spaniard and his young, bad-boy-loving girlfriend, and a general sense of impending doom permeates the claustrophobic train cars.

As the plot slowly escalated, pulling Emily Mortimer’s street-smart character down with it, AK and I contorted our faces right along with her. Her thoughts screamed, Oh shit oh shit oh shit, I am so fucked. We said to each other, “She is so fucked.”

The carefully crafted catharsis made the second half of the movie—which was more eventful but somehow slightly less suspenseful, like a valve had been released—believable despite some crazy-ass turns.

I may have a small crush on Emily Mortimer now, even if she is in Pink Panther 2.

I had a movie theater and a Diet Coke to keep me awake Friday night, but Duplicity would have done the trick too. It’s suspenseful in a not-so-realistic (although what do I know about corporate spy games?) but nevertheless meticulous way. I probably don’t need to tell you that Julia Roberts and Clive Owen play former secret agents and tentative lovers who “go private” in an attempt to steal millions from their corporate employers.

There’s a lot of plot, making it almost as hard to focus on stuff like theme and character as it no doubt was for writer-director Tony Gilroy to insert it. But he does, with help from his actors (Roberts is a warm and wise and seemingly naturally-aging—and more gorgeous for it—41-year-old, and Owen does nice puppy-dog eyes). At one point, the CEO (Tom Wilkinson) of the company Roberts works for (but doesn’t really, because she’s a triple agent) gives a speech about how human evolution has peaked and corporate evolution is the only hope for the future.

The ending, which I will not give away, made me think maybe this was true and that this was a really cynical movie. Or maybe it wasn’t, and that this movie believes individual human relationships are the only thing you can trust. Even thematically, there’s a little double-agent work going on. But it’s a good thing, and I’m excited for Duplicity Deux.