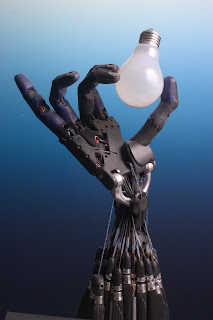 The upside of hernia surgery is that it gives me an excuse to be completely irresponsible for a week, which I intend to take full advantage of, beginning Thursday. I shall call on my high school-era procrastination and rerun-watching skills—they’re a little rusty, but the foundation is solid.

It’s ridiculously hard for me not to make a to-do list for my involuntary staycation, and yesterday, after one of my New York co-workers kindly offered to write up a document I might have otherwise written, I confessed to my boss, “I could feel my fingers being pried open as I reluctantly let go of it.”

“It’s good to let go,” she assured me. “I promise you something wonderful will come and fill your hands.”

I hope so. But the first thing may be a remote control, which would be wonderful, actually. (I guess I mean a figurative remote control because our TV has pretty much permanently relocated to the repair shop.) If I’m feeling energetic, maybe I’ll read. If I’m feeling really energetic, maybe I’ll blog about how nasty my stitches look. But don’t get your hopes up. This week is all about a healthy lack of commitment.

Here’s my latest roundup of Facebook book reviews, should you be feeling energetic enough to read.

The Last of Her Kind by Sigrid Nunez (also known as my new book club’s first book—shout-out to all those who participated in a great discussion Sunday night and helped make my New Year’s resolution a reality!):

I can tell already that this book will stay with me for a long time. As an upper-middle-class kid with a tendency toward over-seriousness, I related to Ann’s guilt and admired her sincerity, even though I found her fetish for suffering tragically flawed (if all poor individuals are good and all privileged individuals are bad, does’t that create a kind of essentialism that means materialism has won?).

I like thinking of this novel as a riff/reaction to The Great Gatsby. My hunch is that Sigrid Nunez likes Fitzgerald’s book more than her narrator does, but believes it begs for more: more women, more of Nick Carraway’s (i.e. Georgette’s) life when Gatsby isn’t around, and a more interesting American dream than that of getting rich. And while not many people’s prose could hold up to Fitzgerald’s, Nunez is right to be audacious.

This is a big, fat, delicious American book told in a humble but compelling style. It makes full use of every narrative trick out there but always earns it. The Last of Her Kind is a great companion piece to American Woman by Susan Choi, another recent favorite of mine, which covers the radical women of the ‘60s and ‘70s with similar nuance.

The remedy of the title isn’t the syrup Lydia brews up but rather human connection—in the form of letters, love, nursing and the other interactions that fill the pages of this compelling slice of history. And even love doesn’t save anyone (it would be an obnoxious message if only the unloved died during the influenza outbreak), but it does make life worth living.

Myla Goldberg is one of those rare writers whose prose and characters are utterly charming without being precious. I was happy to immerse myself in WWI-era Boston, which through her lens was both simpler and more intense, the way life may inherently be when it’s doomed to be short.

Nights at the Circus by Angela Carter:

I love a good circus novel, and I'm pretty sure this is a good circus novel—it’s smart and weird and full of allusions to stuff I read about in grad school—but I never fully got into it. I liked Fevvers, the bawdy winged woman around whom the story revolves, and many of the bizarre, tangential tall tales...but there were just too many long passages about drunken clowns.

Let me know if you want to chat during your convalescence, and I'll send you my phone number.

How many circus novels are there?

Thanks--you rock! Yeah, I might spend the whole week napping with Team Gato, but email me your number in case I manage to rouse myself from supreme laziness to medium laziness.

The circus novel to beat all circus novels is Geek Love. Chang and Eng is decent. And I've got another on my shelf waiting to be read. Is four a genre? (Oh, and there's Water for Elephants, so, five.)

I loved the Angela Carter book--I followed her work as it came out--and also Geek Love. Thanks for pulling these together as a genre! Thanks too for the book recommendations. I've been existing on New Yorkers and books by and for music geeks. Time for real novel.