is that your foot on my back, or are you just happy to see me? 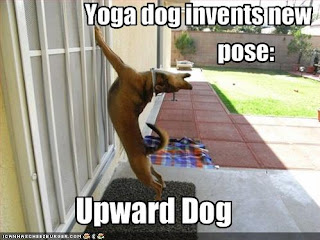 As of 24 hours ago, I was in a blissed-out state, thanks to an intensive hour and a half of yoga, which took place at a community center in Hermosa Beach and benefited the L.A. Mission. My soul was cleansed. My body was sweaty but cleansed. Things I didn’t know had been hurting no longer were. And I got free pizza and a discounted yoga mat. Such is the nature of benefits that are well corporately sponsored. (Though I wondered if all the paper and plastic that comprised my various freebies sort of karmically counteracted my donation to the mission. But I don’t mean to sound cynical—the nonprofit geek in me noted that the event bore every mark of fundraiser awesomeness.)

AK, my sister and I stood behind a row of well-toned asses in Lululemon pants. Never had I seen such big, ripped biceps on so many straight girls. I tried on various attitudes: envy? Lust? Hatred of yuppie scum? Happiness that I was engaging in an activity that didn’t require me to squint at a computer screen? I decided on the latter.

We did sun salutations, balance poses, all kinds of pretzely stretches and a short period of freestyle dancing (during which I realized I envy was definitely not the right choice—even the tubbiest emo kid at the Echo on Saturday night had more funk). Then—because hey, who’s tired? Not me!—we paired off to do inversions, which is yoga-speak for handstands.

I love a good handstand, even if I can no longer do a good one, but I was paired with Leslie, one of the bicep girls. We were supposed to spot each other, but it seemed clear she did not need a spot. But I wasn’t sure how to say, “I’ve been checking you out and I noticed that, even though you’re like 5’3”, you could probably bench press me.” So I just said, “Um, do you usually do this on your own?”

I guess part of being a yogi is not being grossed out by touching sweaty, doughy amateurs. Another part is not minding being the sweaty, doughy amateur. And not feeling self-conscious about your decision to not give yourself a pedicure since, oh, sometime around the holidays. Even when the glowing, pregnant, handstanding teacher announces that it’s time to give our partners massages with our feet.

As of today, my ass and my knees seem to be playing tug-of-war with my hamstrings, but I still feel pretty damn good.

I totally want to try yoga.

I love yoga and yet I do not want anyone touching me during it. I like it for it solitaryness. And with their feet? NO THANK YOU. I have yet to tackle the handstand as I am still in beginner phase. I want to though. Someday! I feel silly admitting that I am actually afraid to do one.

I can only imagine the horror of yoga.

TL: The best part is shavasana at the end, which means "nap time" in yogi, as far as I'm concerned.

S: Handstands against the wall are a lot easier. I'd rather kick up against a nice, un-sweaty, un-intimidating wall than a live person any day.

MD: So you're one of those people who doesn't find a woman who can bench press you hot?

I like my broads a little doughier. No, it's just the thought of wearing one of those outfits and doing all those poses that would leave me completely mortified.

i'm doughy but i still do yoga. i really do enjoy it, i find it much better than jumping around to really loud music. altho i'm not anti-aerobics. i do my yoga at home since i can't afford to go to a gym. but i do miss classes.

and i'm such a yoga geek, but savasana literally translates to corpse pose. tee hee!

That would explain why it's more relaxing than poses with names like "flying pigeon."