when she was anxious, she was awful 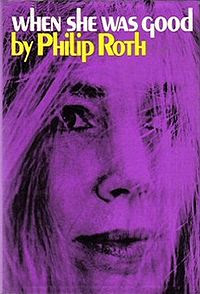 In spite of my New Year’s resolution to the contrary, I’m really good at finding things to be anxious about. If I don’t have any real problems, I’ll make some up. I know, it’s a fabulous way to live.

Here’s my latest concern: Right now, I’m reading (well listening-to-on-CD-in-my-car) When She Was Good by Philip Roth. It’s my first Philip Roth, but AK told me he’s gotten more experimental over the years. Even though I checked out this CD collection for its shiny newness (my diva of a car stereo won’t play anything the slightest bit scratched), apparently it was originally published in 1967. And I love it.

But wait, you say, weren’t you worried about something here?

I’m getting to that.

I’m worried because this is like the fourth in a string of 1950s and ‘60s novels I’ve read and loved over the past couple of years: Franny and Zooey, Revolutionary Road, Giovanni’s Room (well, I didn’t love that one, but I loved the style). I used to feel bad for never reading anything pre-1975, but then I concluded, I write contemporary fiction! I should study and love the new stuff! I believe in writing what you read more than writing what you know.

So, no offense to Jane Austen or the Brontes, because from what I remember of English 10B, I like them a lot too. But whenever I meet someone who only reads the classics and bemoans the lack of lyricism in contemporary literature, I am so done with them. They think that just because Austen is what survived into the 21st century, it was all like that back in eighteen-oh-whatever. We’ve just had a couple of centuries to filter out the crap.

We may have only had half a century to filter out the crap from the fifties and sixties, but I’m liking what I’m reading. And I’m worried that that means I’m stuck in the past, destined to write Salingerland. I should be admiring Salinger and Yates and Baldwin and Roth, but I shouldn’t be wanting to emulate how they use plain words in such meaty ways, their razor-sharp interior monologues, their infusion of psychology. Psychology was new back then. Now it probably only works if you add a bunch of irony and pastiche and debunkery, which I like sometimes too, but still…even Philip Roth is apparently not trying to write like Philip Roth these days.

For the record, I’m not that worried about this. I’m actually sort of proud of myself for ever so mildly expanding my reading horizons. But the class I’m teaching keeps reading journals, so this is mine for this week. And what’s a journal without a little drama?

"bemoans the lack of lyricism in contemporary literature," these people have obviously never read Toni Morrison (or Jeanette Winterson). what idiots. and the reason i think Austen and the Brontes wrote like they did because that's how people talked. it would just be silly to write a book, etc, and have our characters speaking like they are in a shakepeare play. (unless of course they were in a shakespeare play, ha!)

If I started thinking about how I was writing, in terms of what period of history it would've been written in, I'd probably never post anything.

In film school, when it came to scripts- plain words in meaty ways was all the rage. At least of my profs.

As for "I write contemporary fiction!", that's the debate from dinner this eve about what "contemporary" means when it comes to art. (I'm willing to give the moniker to anyone currrently living who's created something within the last 10 years.) Flanked by word lover and literalist, it got a bit heated. American OED that resides permanently by the table was consulted and we all still thought we were right. I think 2 of us were, including myself.

So... what do you mean when you say that?

J: I agree: Humans are meant to be omnivores.

C:I'm with you on the definition of contemporary: written in the past, oh, twenty years, give or take? So even someone writing an Austen knockoff would be contemporary if she wrote it in 2002. I do think it's important not to use "contemporary" interchangeably with "modern," which is a particular aesthetic movement I haven't totally wrapped my head around yet.

Not that anyone asked, but I also find it helpful to remember that postmodern doesn't mean "all done with modernism"--it's inherently informed by modernism, in the same way that post-colonialism is informed by colonialism.

(Academics, feel free to correct the vague recollections from grad school above.)

Ah yes, I checked to make sure no one meant contemporary as an artistic movement. "Abelardo Morell" by Abelardo Morell; foreword by Richard B. Woodward has a good little intro discussing modern & post-modern work. Bonus: cool photos.

The problem, I think, came with contemporary's other use, happening concurrent with. I.e., How does one define who her contemporaries are? Are they people doing similar work you hang out with regardless of anyone's age? People in your generation, however you choose to define generation? I lean to the generational approach in that case, but I could argue it the other way as well.

You've given me alot to think about.

i always thought contemporary, concerning literature, was centered around the theme of the work, not exactly the time period. yes? no?

i remember someone asking me what i liked to read and i said contemporary lit and of course they wanted an example so i said Toni Morrison, and they laughed saying that Morrison wasn't contemporary, ie, she was around when they were growing up.