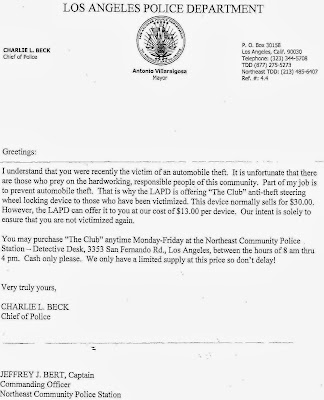 From what I know about you, I like you. Like that one time you were walking through an Occupy encampment with a KPCC reporter, and the reporter asked you if you smelled marijuana, and you said, "Nope. Sure don't."

But this letter worries me a little. First, because my car wasn't actually stolen, so I don't think you read Officer Honor's police report very carefully. But seeing as how it was handwritten, maybe you just couldn't decipher it. (Does the LAPD have a computer??)

The thief took my radio, iPod and my car's computer, all of which could have happened if I'd had The Club tightly locked on my steering wheel. Although now that you mention it, I think he or she also took The Club that was sitting under the passenger seat, which I kind of imagined myself using as a weapon if I broke down somewhere scary and a creepy person approached my car.

The good news is that you guys are probably out solving real crimes. Right? The bad news is that you are crowd-sourcing small-time crime-fighting. If I sprained my knee, I'd be troubled if my doctor--upon not seeing me at all--mailed me a coupon for an elbow brace.

Also, as AK pointed out, this is a very American, capitalistic buy-something-to-solve-your-problems approach to crime prevention. Call me a cynic, but I feel like maybe you're getting a little kickback from The Club. If so, I hope you guys use it to buy a computer.