getting it wrong since 1543 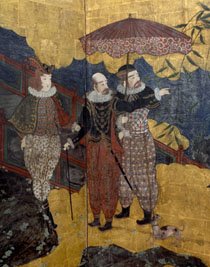 I’m back, and figuratively jetlagged if not literally, since I never left the Pacific time zone. I’ll tell you more about Seattle and San Francisco in a bit, but for now I’ll just steer you towards a fascinating exhibit at SF’s , where Jamie and I killed some time before our flight yesterday.

“A Curious Affair” consists of paintings, sculptures, tableware and fuiture—dating from the 1600s to the 1900s—that trace Asia’s influence on and vice versa. There are wildly inaccurate maps, landscape paintings that deposit Chinese pagodas in the midst of Thai villages, Japanese triptychs that merge a couple of French cities and call it “,” and absurd ethnic caricatures from both parties. Easte and Weste cultures were fascinated by each other (though the West tended to drool over the East a bit more than the other way around, apparently), but not enough to be sticklers for detail. They just sort of rounded off to the nearest lotus-leaf hat.

Part of the reason I’m a fiction writer is because I’m a lazy researcher, and “A Curious Affair” reminded me of the myriad ways you can go wrong when writing about a place or culture you’re unfamiliar with.

Currently I’m trying to write a story set partly in . I thought I at least had enough material to write convincingly from the point of view of a 20-something American woman who spends a week there, but right now I’m working on a scene where my main character rents a bicycle, and I find myself wondering, What brand of bicycles do they ride in ? Is the bicycle rental industry dominated by the Chinese or the Malays or no one in particular? Would it be realistic for the bike to have a basket on the handlebars or is that just so American?

The other thing that “A Curious Affair” drove home was that postmode pastiche predated the concept of postmodeism (not to mention modeism) by a good 400 years. Like many people of my generation, I trip out on Japanese T-shirts with poorly translated English phrases (and the American goods that now imitate Japanese goods that imitated American goods).

But this back-and-forth, this lost-in-translation and lost-in-re-translation, this global game of telephone, has been happening since the Portuguese first docked in . Maybe even since Pangaea cracked apart and people started wandering across footbridges to get to newly formed continents. Authenticity isn’t dead; it never lived. Which is a huge relief.

Pink Huffy mountain bikes. With flower baskets and bells. That's all they ride over there. Trust me, I know.

Thanks. I'll make sure to mention you on my acknowledgements page.

Of course, the universal language of banana seats. They bring people together.