how hot is it? 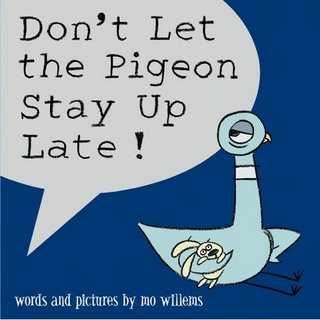 --So hot that my cats have actually gotten into the new game I invented for them, Chase The Ice Cube Around The Bathtub—which, if you think about it (and if your entire species is naturally averse to water), is not really all that fun.

--So hot that I woke up at two in the morning Saturday night—awakened by my own body temperature, I think, but kept awake by my neighbors, who were in the hall singing along loudly to R&B songs. I’m not really the tell-the-neighbors-to-keep-it-down type, but even if I was, I would have been too hot to do so. They seemed like they were having as much fun as two people can have at two in the morning when it’s at least 15 degrees too hot to have sex.

--So hot that AK and I spent even more time in Borders than we normally would have, reading the entire, brilliant Pigeon series by Mo Willems. As with many series, the original Don’t Let the Pigeon Drive the Bus is a tough act to follow, but The Pigeon Finds a Hot Dog doesn’t disappoint. It offers a subtle but delightful twist on the established Pigeon pattern, thanks to the introduction of the Nermal-esque Duckling, who gives the Pigeon a taste of his own medicine.

Which makes the third installment, Don’t Let the Pigeon Stay Up Late, a bit of a let-down, given that it follows the exact same arc as Bus, but with less of an absurd flair, as it is somewhat more realistic that a pigeon would stay up late than drive a bus. I suspect that Willems may have succumbed to pressure from parents’ groups to include a “lesson” (go to bed early), but to his credit Don’t Let the Pigeon Stay Up Late valiantly (even subversively?) maintains its Pigeon’s-eye-view perspective: The reader, despite being entrusted with making sure the Pigeon gets to bed on time, can’t help but relate to the Pigeon’s frustration and persistence.

--So hot that…. I was going to write about our long trek to the Hollywood Bowl and the delight of eating shrimp cocktail in the dark while watching the Flaming Lips, and how even-more-exhausted Christine and Jody looked stretched out on the bench behind us because they were unfortunate enough to move frickin’ apartments on the hottest day of the year, but the current heat is now preventing me from doing so. Who can type when the backs of their knees are sweatier than…oh, I don’t know, something really sweaty.

I give up. I’ll be in the bathtub batting around an ice cube if you need me.

I thought I was the only person who knew about those pigeon books! I laughed far too hard for someone reading a book aimed at 4 year olds.

They're great, aren't they? But now I think they're totally going to catch on with the hipster crowd, and everyone will have Pigeon T-shirts, and that thought is making me sad, even though I kind of want a Pigeon T-shirt.

You should check out the farting dog books. I'm serious. There's a children's book series about a farting dog. There's another about pooping. Now, that' hot!

I've heard of Everyone Poops, but the farting dog is new. I have so much to learn.

That's Walter the Farting Dog, and Mo Willems also did a really funny animated series called Sheep In The City, that I LOVED. It was about a sheep that was chased around the city by the Army for some reason I can't recall.

I went camping with my honey, Buddyray Jigmeister that same hot day at Pt. Reyes, and it was SOooooo hot that he woke up in a sweat--- covered with flies! It was like Amityville! I stared at him like a demented midget!

When heat in the Bay frickin' Area kills hamsters (as it did my friends Erin and Erin's; R.I.P. Tuesday the Hamster) and turns nice girls into demented midgets, can the apocalypse be far behind?