the apex and the tangents

Saturday was arguably our best book group meeting yet because an amazing seven out of nine people had finished the book. Our stats up till now have been more like six out of 12. So first of all, a shout-out to Colson Whitehead for writing a book that was only 211 pages.

Unfortunately, only three and half of the seven really enjoyed the book, Apex Hides the Hurt. I count myself as the half. I chose the book because I loved Whitehead’s previous novels, The Intuitionist and especially John Henry Days. My lesser love for Apex makes me wonder if my tastes have changed or if the book is a departure—I can’t say it’s a lesser work because it seems to accomplish exactly what it sets out to.

As tightly written as advertising copy, Apex is, well, an allegorical send-up of advertising copy. The novel’s nameless protagonist is a “nomenclature consultant,” the guy who dubs new sleep aids “Drowsatin,” coffee chains “Admiral Java” and—his greatest triumph—multicultural band-aids “Apex.” But after a period of disillusionment and uncharacteristic down-and-out-ness, he takes on an unusual assignment: solving a small town’s debate over what to rename itself. Should the name celebrate the town’s striving settlers, its early elite or its currently striving future elite? 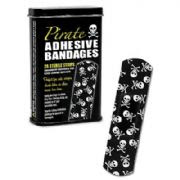 I always go straight to the ideological, and, proudly wearing a pirate band-aid on my right arm, I delivered my sermon from AK’s couch: “This is how I see the allegory of the book: Our culture of advertising literally puts a band-aid on problems, and by not acknowledging them, they get bigger. At the same time, I think Colson Whitehead is saying that it’s human nature to aspire. To want to make things shiny and pretty so that we can believe we are shiny and pretty.”

But the nice thing about book groups, besides the shrimp wraps and hummus and wine, is that you get knocked off your couch a bit. Everyone brings something different to their respective readings. AK and Jody brought indifferent shrugs: Was the big reveal really worth waiting for? they asked. Were any of the characters likeable and fully wrought? And while I liked the book a little more than they did, I had to agree that it was more clever than soulful, though there were glimmers of the latter.

Craig, an urban planner by day, pointed out that the two narrative threads of the novel are actually structured to form a mountain with, natch, an apex at the top. Garrett called attention to the novel’s humor, while his wife Andrea, looking bored, said, “You guys keep choosing all these really literary books and talking about stuff like allegory, and I’m just thinking, ‘Uh…okay….’”

Veronica riffed on the concept of naming as it applies to race—“Alberto and I are always having this discussion about ‘Hispanic’ vs. ‘Latino.’ He thinks ‘Latino’ is so much better, but I grew up feeling like I couldn’t relate to either because they’re both big catch-alls that refer to entire raped nations. And I think both Alberto and I came to our decisions intellectually—it’s not like we grew up with parents telling us, ‘We’re Chicanos. This our history.’”

Then she paused and said sheepishly, “Wow, that was a huge tangent.”

But tangents are one of the best parts of book groups—I love it when books (or movies or plays or songs) slip into real life. When they irk us and bolster us. We shouldn’t just read them and then put them back on the shelves, congratulating ourselves for having done something smart. That’s kind of the whole reason I have this blog (I know, sometimes it’s hard to tell)—to explore all the great and inspiring and ridiculous ways that culture informs my life. That, and to bitch about traffic, of course.