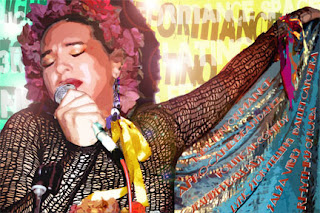 Although there was a time in my life where I found myself watching The Bird Cage whenever it came on TV—not so much because it was so funny but because its bright colors and cheerful gayness were as comforting as hot chocolate—I sort of thought I was over drag queens. Okay, camp, got it…fierceness, got it…making us look at ourselves to realize all gender is performance, got it….

But Friday night at Highways, Plastilina made me rethink my dismissal of drag. Neither beauty queen kitschy-pretty nor Divine grotesque, her costume was one part Frida Kahlo, one part sea witch, one part antique lamp. Its ingredients included a red, ripped fishnet leotard, turquoise bustier, sparkly cape and lots of roses. I would have swooned with envy during my college days, when my dream was to dress like a Rent chorus girl, but even then I would never have been able to pull it off.

Plastilina sang sad Spanish ballads in an unabashedly deep, convincingly lovelo voice that carried across the street to Crossroads and then some. Like all the performances that night, it made me wonder, Wait, why is Britney famous again? Of course, without untalented pop stars, who would drag queens parody? Yet part of what I liked about Plastilina was that she didn’t need to directly mock anyone. She was just her own glittery, fabulosa-yet-sincere self.

I need to get my ass over to Highways! I've missed so much. I still consider that place a major part of my development.