Long ago, my mom taught me that all the best Halloween costumes (if by "best" you mean "cheap and easy but still homemade") start with a pair of sweats. Throw in a couple of styrofoam eyeballs, some break-and-bake cookies, one plastic trash can from OSH and voila, Cookie Monster... 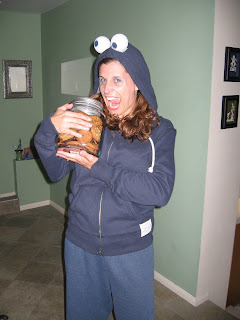 ...and Oscar the Grouch. 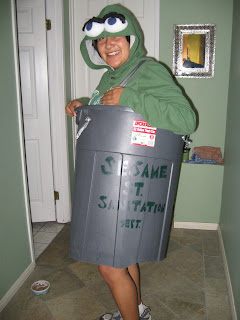 Some of the other best costumes, though, start with an Afro wig and a cardboard palette. When we met up with our friends at Akbar, Lee-Roy was recognizable to fans of Bob Ross as the PBS art icon fond of painting happy trees. 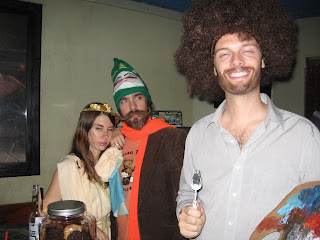 First prize went to a guy named Gordon, who'd duct-taped himself a fine-looking suit made from Yes On 8 signs. "All stolen," he announced, and a huge cheer went up. It was a nice reminder that even if the H8ers take over the constitution, the gays are still funnier. 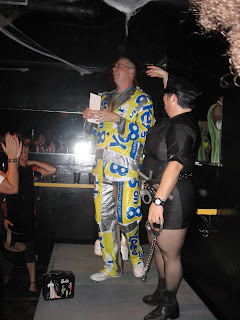 I spent the rest of the night boogieing with Oscar, who really knew how to shake his can. 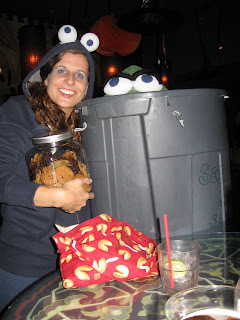 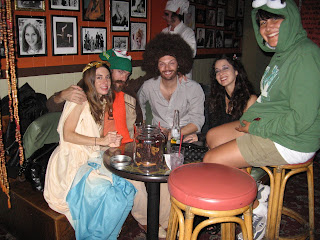 But when he took a break from it, it was only a matter of time before the drunken patrons of Akbar decided it was a real trash can, despite the fact that it said "Sesame Street Department of Sanitation" on the side and had no bottom. By the end of the night there were like 15 pieces of trash in it, but the bar back didn't care. She just looked happy to discover she didn't have to take it to the dumpster out back. 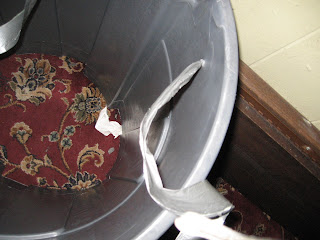 I have to say I'll be a little sad when the election is over (and let's hope that's the only thing I'm sad about on November 5). It's been such an exciting time to feel like part of my community. Saturday afternoon I went to an interfaith No On 8 forum, and Saturday night AK, Christine, Jody and I went to the huge Dia de los Muertos celebration at Hollywood Forever. There we ran into AK's friend Ariel, who was getting her calavera on, as well as her activism. 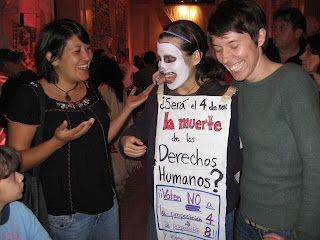 There were flags and feathers and marigolds. Sage singed the air. 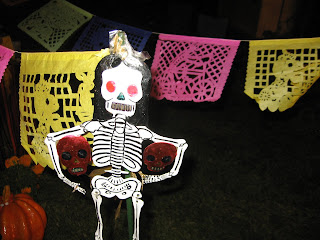 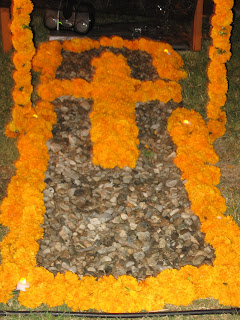 There were lots of altars to lost loved ones, as well as more political altars, including separate ones for shelter-killed dogs and abandoned cats. I've always liked the idea of God noticing the fall of every sparrow, and I think it counts for something when humans mourn the passing of animals too. 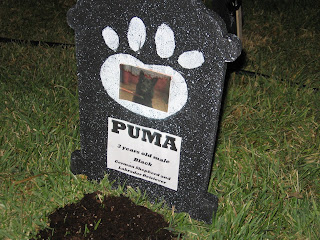 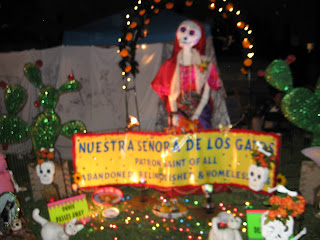 This one reminded me of T-Mec's favorite pose. 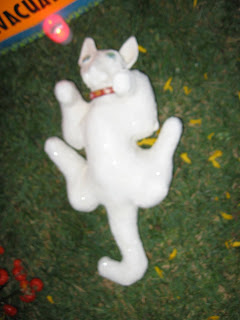 I've been in kind of a moody mood all weekend, but unlike Christmas, when you have happy Santas in your face at every turn, Halloween and Dia de los Muertos are the perfect time to be colorfully angsty. 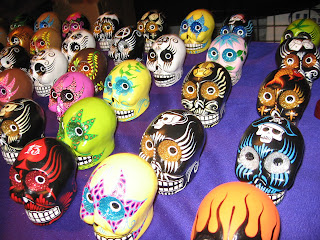 You know, those costumes are very imaginative--way better than store-bought ones!

Seems like you had a pretty wild Halloween? I just stayed home and masturbated in front of an open window. Jealous?

PG: Thanks! It's all about the sweats.

MV: What counts is that you made time for what's really important.

Those costumes are priceless!