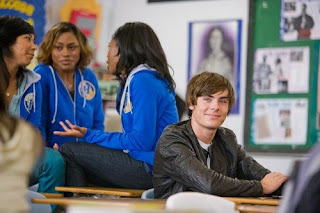 No, that’s partly a lie. Although AK and I did see it at the cheap-o Highland 3 during the still-scorching late afternoon yesterday, I also kind of wanted to see it because 1) most movies about teenagers have fun clothes, 2) maybe my 16-year-old mentee would see it and then I’d be, like, speaking her language (although last I checked, the movie at the top of her to-see list was Obsessed), and 3) I have a high tolerance for dumb comedies, in a way that I do not for dumb action movies.

Because of its dumb-comedy designation and its 13-year-old target demo, I tried to be patient during the scene where Mike (Matthew Perry reincarnated, sort of, in Zac Efron’s body) gets beaten ad nauseum with a variety of toy swords by his geek best friend who doesn’t recognize him. After all, I’d signed up for this.

The movie is a revival of the ‘80s body-switch genre—which is kind of meta, actually, since Mike is beaming back to his 1989 self—but I don’t think that’s an excuse for retro morality, which I didn’t sign up for so much.

Mike decides that his mission as neo-high-schooler is to help his teenage kids, and this apparently involves:
There you have it, 13-year-old Zac Efron fans: Sex is for procreative purposes only, unless you’re a boy.

Whenever Zac gave a big speech (such as the making love speech), he would throw his arms open wide, as if about to break into song. I really wish he had, because a good musical number would have gotten me through some rough times.

oh, body-swapping movies go back further than that. Jodie Foster's Freaky Friday came out in '76.

I'll cut ya slack on seeing a dumb movie though since I just watched and was entertained by D.E.B.S. on tv the other night. Jordana Brewster's got a great grin.

Have I mentioned my firm belief that Matthew Perry is hot?

TL: When I wrote about TV for Zap2it.com, I once got a long email from a woman who believed she was destined to marry Matthew Perry and wanted me to introduce her ('cause apparently I'm connected like that?) before she got engaged to her boyfriend. It was you, wasn't it?