Just like how that set of stairs in Washington, DC will forever be known as The Exorcist Stairs, wine-tasting in the Santa Ynez Valley has, since 2004, been known as The Sideways Tour. I've seen ads for actual bus tours built on this theme, a la the Sex and the City tours of Manhattan. But we had something better than a bus: We had Meehan, who'd scoped out the area a couple of times since moving to SB in August.

Ever since her friend's dad got ill from picking pesticide-drenched grapes, she's been an advocate of organic wines, so our first stop was a small but beautiful winery called Demetria, which practices not only organic but also "biodynamic" farming.

Lee, the head winemaker, was happy to fill us in on the principles of biodynamics, which involve reviving damaged soil and planting according to the phases of the moon. It seemed like one part sustainable farming, one part Scientology.

But as Meehan said, "The main thing is approaching the process with intention. And if that means burying a yak horn full of manure in the ground instead of spraying your vines with nitrogen, I'm all for it." 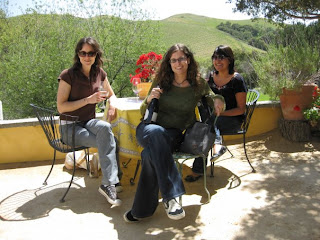 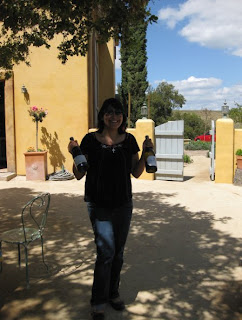 The lavender-lined walkways and by-appointment-only peace of Demetria spoiled us a little for Foxen, a crowded shack right off the highway, adorned with wine cartoons and other wacky signage. The wine there was so-so,* but we were inspired by the wine humor on the walls (and by the consumption a fair amount wine) to take pictures of ourselves forming Foxen's anchor logo with our bodies and posing as if we were wearing barrels in lieu of clothing. 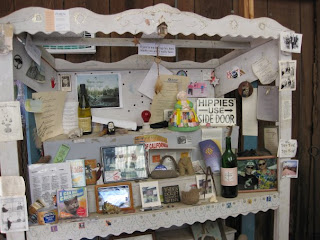 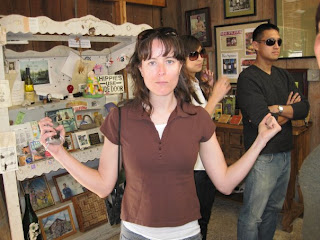 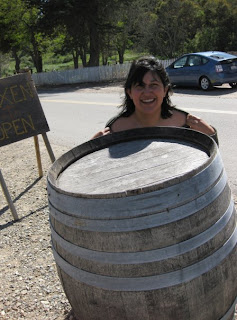 Our last stop was Sunstone, an organic winery which Meehan had recently become a member of (apparently wine club membership is the local hobby). They had a really tasty red called Rhapsodie du Soleil, I think, and a lovely/garish faux-mission-ruins motif. 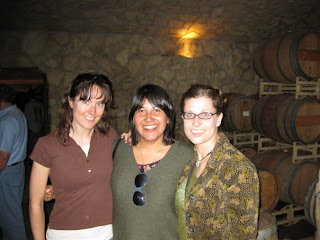 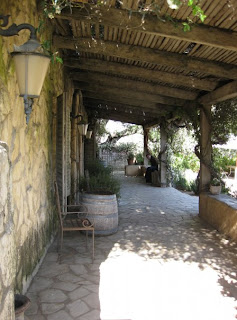 We stopped in Solvang for an early Chinese dinner, where the waiter laughed in our faces for requesting brown rice, then headed home with Meehan generously acting as designated driver. We pulled off the 101 in Mussel Shoals, a tiny seaside hamlet with an even tinier, closed-to-the-public man-made island to the left of its beach. On her many trips up the coast, Meehan had grown curious about what it was--private resort? The world's smallest army base? AK was sure they were growing dinosaurs from frog DNA there.

"It's a private island owned by an oil company," said the girl at the front desk of the only hotel in Mussel Shoals. "You can't go out there. It's closed to the public." Our curiosity wasn't satisfied, but our suspicions were confirmed: Whatever was going on, it was shady. When the velociraptors decimate a beach town near you, don't say you weren't warned.


*Note: Asking me to critique wine is like asking a kindergartner who just learned the alphabet to write a book review for the New York Times. But still: Learning one's ABCs is pretty damn cool.

I feel like I should pimp my 5 yr old niece out to the NYT now. I bet she'd write something pretty entertaining with an intriguing mix of upper and lower case letters.

Having received many creative texts from my teenage mentee, I can tell you: Upper-and-lower is how the kIdS r TaLkInG tHeSe DaYz.

So that's where those fucking monstrosities are coming from. Stupid velociraptors. They ruin EVERYTHING.

Big Oil is responsible for most bad things in the world, including flesh-eating dinosaurs.

Are you sure flesh-eating dinosaurs are from oil companies? If so, that is a relief. I was scared it had something to do with my burying a yak horn full of manure.

Dang! I should have visited the wine country before I entered rehab.

S: Oh yes, it's the oil companies. They're trying to make new dinosaurs so there will be more fossil fuels. Actually, that might not be the worst idea ever. Okay, wait, yes it is.

N: AK and I were actually talking about how you could replicate the experience with almost any tasty beverage. We imagined ourselves dissecting the nuances of a fine orange juice.