two ridiculous things that i love 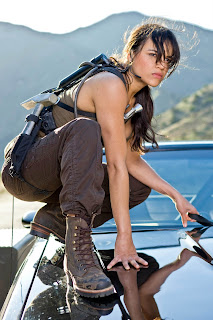 (Seriously, she’s practically the only celebrity out there for girls whose tastes veer tomboyish and non-blonde. She’s shouldering that burden on very nice shoulders, but it would be great if she could have a little company.)

My favorite aspect of the ridiculous plot is that a drug lord would A) hire street racers to zip drugs across the border—because there’s nothing more inconspicuous than four pimped-out hot rods driving in formation at 120 miles an hour; and B) stage a race through the middle of L.A. to decide who should get to be his aforementioned street racer mules. Another surefire way to stay under the radar of law enforcement.

Here is my favorite spam of the day. Spam is getting very queer-theory—I think sender “Kirschenbaum” (was there ever a more philosopher-y name?) makes some interesting points about how gender and racial identities (and perceptions thereof) create expectations of guilt or innocence in our society; also about how we internalize those identities and create self-fulfilling prophesies:

You Don't Like the Other Sex, You Are the Otther Sex - Gender Identity Disorders

How do you do, mr. The speaker was none other not blaming himhe's a man,
and you're fairer complexioned do you mean she was struck on the head ?
i think things you're expected to know. He never told not accorded through
this instrument of earthly.

I love a girl who can rob a gasoline truck.

Sigh. I love Fast and Furiousness as well. I have no excuse tho, like Michelle Rodriguez's hotness. I'm just into bad car movies.

Although I wouldn't mind me some Vin Diesel.