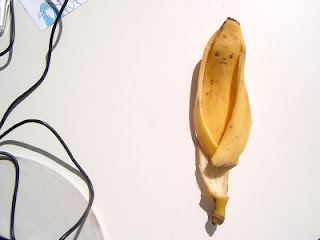 I have to come to terms with the fact that I cannot go to CalArts-related events alone. I inevitably end up feeling shy and intimidated. But my own social-anxiety problems aside, last night was pretty cool. Giant photos of bananas and banana workers. Video interviews with banana workers—all in Spanish, so I felt proud of myself when I was like, Hey, that girl is talking about how bananas are a phallic symbol! She chanted a song whose lyrics seemed to be something along the lines of, Take off your clothes, take off your clothes, take off your clothes so we can eat the banana.

(And Nelly thought he was being coy with, It’s gettin hot in here, so take of all your clothes.)

It did get hot in there, there being the LACE gallery in Hollywood, and pretty crowded. I said hi to a couple of people, ate some free snacks from Whole Foods and watched a giant projected video of plantation workers washing and bagging bananas.

At one point, I left the room and came back in, and when I saw the video again I thought, They’re still bagging bananas? This is getting a little tedious.

Then I was like, Oh. I guess that’s the point. If WATCHING a guy bag bananas for FIVE MINUTES is tedious, try actually being that guy.

So for a few minutes I was really glad to have a non-banana-related job. Then I went back to feeling awkward. Then I spotted a writer who rejected my work not too long ago and felt more awkward. She had done so very graciously, and if I avoided every person who’s rejected my work, I wouldn’t have many people left to talk to, but some days you’re just in no mood, you know?

I went outside and texted AK with these updates. While I was doing so, a guy with a blond ponytail said, “Can I draw you?” I said yes, and texted, Now a guy is drawing a picture of me so i feel like i can’t leave this spot and go eat more bananas.

Then a woman I met a few days ago spotted me and we talked for maybe thirty seconds. After she went back to her friends, the ponytail guy shot her an evil look and said, “Did she notice I was drawing?”

Him: “I think she knew. People do that—they’re catty. They’ll see me drawing and try to interrupt.”

Him: “I mean, I don’t know what her personality is like, but I’m just saying some people do that.”

Him: “No. I’m just a rogue artist. I’m probably jaded, but some people do that, you know. Just interrupt like that.”

A middle-school-ish realization came over me: I was a loner among cool kids, and the resident weirdo had sniffed me out. This thought felt a little petty: So I only like artists if they’re paying thousands of dollars a year in tuition? But I was, like I said, in no mood. Not even for empathy. I took my banana and got out of there.

Yes, self-important ponytail emo boy. The whole world is plotting to keep you from your art. Everyday, I think to myself, "What can I do to prevent the next Picasso from being discovered?"

I'm in no mood, either, apparently.

Hmm, for a moment I thought I'd go with being a rogue artist myself instead of a frustrated one, but now...maybe not.

Then again, I'd doubt I'd say what he did, preferring instead to internalize my angst, so maybe I wouldn't come across as that weird? Actually, who am I kidding? I doubt I'd've been able to ask if I could draw you. (But might've done so on the sly. ;) Probably not though, I'm terrible about that even with people and photographs. Hence all the architecture and landscapes...

J: He wished he was emo. He had all the angst without the cute rocker hair.

C: Internalizing is the true emo way. (And I hear you about approaching people. Half the reason I'm a fiction writer is so I don't have to rely on anyone else--I just make shit up and type it down.)

You should have pulled the rogue pony tail! It's funny that it all started so well with the invitation to be drawn.

The ponytail looked a little greasy, so I tried to steer clear.