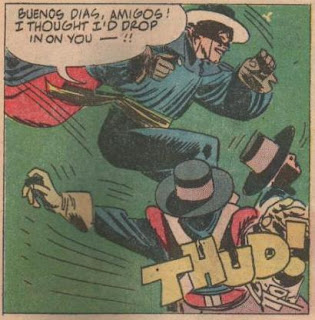 1. the mark of zorro

I just started reading Isabel Allende’s version of the Zorro story—I don’t know the original version, or even the Antonio Banderas version, so I don’t have anything to compare it to, but it’s a great book so far, set in L.A. when it was just barely L.A. (Her Zorro is the swashbuckling kid of a Spanish soldier-turned-ranchero and a mestiza female-warrior-turned-ranchero’s-wife.)

Most of the Spanish characters are pretty nice people, even though they make a living oppressing natives. Father Mendoza is secretly impressed by Jesuit theories and is more into teaching his neophytes than whipping them; Zorro’s father is not exactly a deep thinker, but when he’s attacked by a band of rebellious Indians, he decides to marry their leader (she likes him too) instead of executing her.

Somehow this story got me thinking about slavery and how the south was so economically dependent on it. When it stopped, the whole region was devastated for at least a few decades. I had this weird realization that, if I’d been a white southerner in the 19th century, my stance probably would have been, Yes, slavery needs to end, but let’s transition gradually, okay? Because I would see the cruelty inherent in the system, but, being a white southerner, I wouldn’t have experienced it on a level that made me think, Slavery needs to end NOW. And I wouldn’t want to be poor for a long while.

How do I know this unpleasant fact about myself? Because it’s sort of how I think about environmental issues now. I know that if we want to make it as a species (which will require not killing off all the other species that make up our ecosystems), we’ll need to change how we live.

I get pretty excited about green jobs and reusable shopping bags. But I also spent a good hour or so last night shoe-shopping online. Because I like shoes (particularly pumps with those chunky rounded heels that seem to be so prevalent right now—do you know the ones I’m talking about? Is it called a banana heel?) and am not ready to party like it’s 1799, back when most people had one outfit and one iron pot and nothing in abundance except lice.

So that makes me the equivalent of a slave owner who maybe taught his slaves to read but nevertheless got annoyed when they started mentioning pesky ideas like freedom.

I’m not on a guilt spree here (some of you know I’m prone to them). I just like to know where I stand, and where I would have stood in 1853, and to be accordingly disturbed if necessary.

It’s a little bit of an obsession of mine. In fact, I wrote Lilac Mines, which follows two young women exploring queer life in the 1960s and 2000s, respectively, partly to figure out what your average non-confrontational non-activist (i.e. me) would have been like in the pre-Will & Grace era.

I’m curious: Is it just me, or do you guys occasionally project yourselves back to Gone with the Wind times or Zorro times or Little House on the Prairie times or biblical times…you get the idea. Are your other-times selves as disappointing as mine are?

It's just you. Love, Tracy

Yeah, I suspected as much.