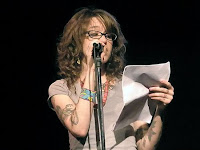 One of these things was not like the others. I mean, I kissed Stephanie in a play once, but I didn’t get paid, so it probably still doesn’t count as sex work.

Nevertheless, the reading went pretty well and I didn’t feel like the sore thumb I might have. Mattilda read a story about shoplifting strippers that was funny and surprisingly innocent, and Cyd sort of generally kicked ass in both his reading and the Q&A by saying stuff about AIDS, gender, tricks and dirty apartments that few people would have had the guts to.

Then I took the mic and said I wanted to read something edgy but had written a book about a character who tries to be edgy and fails, so I was going to read about that instead. And it mostly worked, I think.

I thought that was mildly unfair: You can’t be an outcast nerd and an outcast bad girl. When Michelle called us all up for the Q&A, I think she’d had enough of our self-deprecation.

“Okay, come on up, all you squares,” she said, with an implied (but friendly) eye roll.

Afterward, Jenessa and I went to the Mission apartment of co-RADAR organizer chicks Ali Liebegott and her girlfriend Beth, where they fed us guacamole and bread and spaghetti sauce. They all told funny stories about touring with Sister Spit—reading in bars for angry sports fans, trying to keep their equipment from getting thrashed at punk rock dives. You know how there are anonymous blogs where waiters dish cathartically about their worst customers? I think there should be one for touring writers too. It would help me remember that not everyone reads to packed, book-buying houses every time.

Jenessa was getting over a bad cold, so we had to duck out, sadly, before Ali could really get rolling on a game she invented that involved diagnosing people with random disorders from the DSM. After a long BART ride back to Jenessa’s place in Oakland, we ate burritos in our pajamas and talked about high school. We’re edgy like that.

Ooh! DO please dish cathartically about your touring experiences - thinly-veiled, even, if you must.
I always think that authentic nerdy & square is more interesting to read (and listen to) than fake & affected edgy (said my former & forever inner band geek).

Well, to my co-panelists' credit, they were edgy-and-genuine. I'll see if I can come up with some literary dish...but most of it will probably be boring (if traumatizing for me at the time) stuff like, I got there and they hadn't ordered my books!

I have just downloaded iStripper, and now I can watch the sexiest virtual strippers on my taskbar.