airborne in the open air 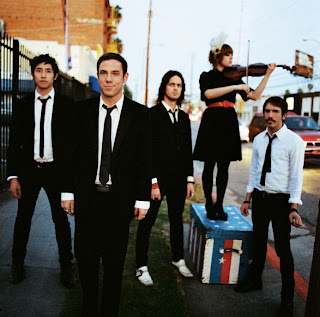 The other day at lunch I was reading this interview with JD Samson, formerly of Le Tigre, currently of Men. I haven’t heard any of the music of the latter and I’m only a medium passionate Le Tigre fan, but I found the interview thoroughly refreshing. Her comments reminded me that sometimes people go the indie/grassroots/DIY route for very good philosophical reasons: because you can retain creative control, reach out-of-the-way audiences and have a ton of fun. Because of the glaring lack of opportunities to sell out in my life, sometimes I forget that I don’t actually want to. I mean, I don’t have anything against mainstream success and I don’t think JD Samson does either. But it’s nice to remember that there are reasons you might not have it that have nothing to do with being a loser or a victim.

I’m pretty sure The Airborne Toxic Event has plenty of mainstream success by now. Just because their lyrics scream MFA writing program doesn’t mean they don’t have a boatload of fans and a fat record deal. But whatever, I needed a transition.

Anyway, AK, Pedro, Calvin and I caught their show with the Calder Quartet last night at the Ford. The Ford is so lovely: It opens to the sky and backs up to chaparral and palm trees. Lead singer Mikel Jollett kept joking about coyotes moseying onto the stage, and it almost seemed like it could happen. The stage was lit up like my mental image of Gatsby’s parties, and every time a song started, it was softly thrilling to watch six bows (the quartet plus two in the band) leap into action.

Mikel Jollett apparently isn’t one of those singers who thinks it’s cool to play song after song without ever directly addressing the audience. His banter was maybe second only to Harry Connick Jr.’s. He talked a lot about his grandma. He was funny, but also sincere and kind of intense for a guy that good-looking. (Also, the opposite of White Noise, their namesake novel which bugged the hell out of me.) I’m sure he’s very busy, but he would make an excellent Roger in Rent. His angst would be more believable than Joey Fatone’s.

Theatricality is what I love about The Airborne Toxic Event. I can’t remember which song starts out sounding like the funeral march in Evita, but I eat that drama up. I love it more, probably, than I could ever love one of Men’s dance-punk numbers. They played some new songs and some old ones and some Johnny Cash and some Springsteen, and I bounced and swam inside the lyrics and the strings.