saturday in the park with the klein-ybarras

This might turn into the most boring post ever, because I’m just going to use the words “great” and “amazing” over and over again. As in, our families and friends are great, the food was amazing. But it’s a risk I’m willing to take in describing the not-a-wedding party-in-the-park AK and I finally had in order to ensure that what happened in Canada did not stay in Canada.

When it comes to weddings and gay weddings in particular, AK and I are much like Ariel Levy. But much poorer. So we wanted to celebrate with our favorite people but we didn’t want to:

Conveniently, Timothy and Heather all but fell from the sky and offered to cater. I mean, they didn’t fall from the sky. I got to know Heather in seventh grade woodshop, and I was so happy when she married Timothy, not because he’s a professional chef (although that didn’t hurt) but because he’s good-hearted and funny and adores her. But he’s also crazy enough to stay up till 3 a.m. making raisin-and-celery chutney for a deconstructed version of the picnic classic ants-on-a-log and that particular brand of wonderfulness seemed to fall from the sky. 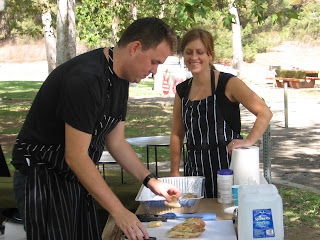 There were ants on logs. There were potatoes with almonds and blue cheese. There were tasty, mysterious spreads on grilled bread. There was sangria on the down-low per park regulations. There was meat that smelled heavenly, even though I didn’t eat it (but man, the Ybarras did. I have never seen a line form faster). 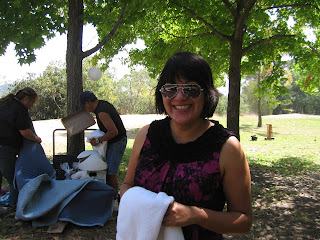 Cathy transformed Picnic Area #1 at Debs Park into a crafty masterpiece of olive green, light aqua and red-and-white gingham, her own version version of a deconstructed picnic classic. Left to my own devices, I would have thrown a couple of streamers over the wooden pergola, but Cathy can geek out like only a Klein can, and so, for a solid month, whenever I’d call she’d say something like, “Oh hi, I’m just making this paper sculpture I saw on Martha Stewart. How are you?” 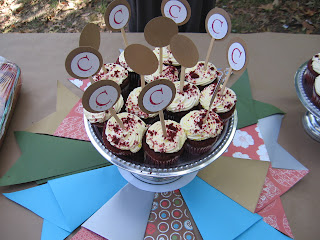 AK’s sister Lori combed thrift stores for cute white ceramic things that would hold funky succulents. “People would watch me filling up my cart with, like, six white gravy boats, and they’d get these looks on their faces like, What does she know that we don’t? Should we be buying up gravy boats?”

Pedro and Stephen provided a rainbow pony piñata named Trixie, whom it felt downright evil to hit, and so I barely did, though I freely partook of Jolly Ranchers from her cadaver. Our families schlepped patio furniture and coolers and croquet sets, brought ice cream and pie and apple cake. Jody snapped photos faster than a paparazzo and Christine kept our barely-a-schedule-of-events on schedule. Alberto got to the park at 8 a.m. to fend off some kids who wanted to have a birthday party for their ten-year-old niece. Take that, niece! (Actually, it was fine. They took three tables next to ours.)

This is turning into an Oscar speech in which I thank many people and inevitably forget someone, but my point is that all these awesome amateur event planners paved the way for me to do the hardest thing ever, which is to relax and have a great time.

Reader, I had a great time.

I could not have been happier not to throw a bouquet or attempt to do Dancing With the Stars-style steps in front of people or make my dad dance. Instead I got to enjoy some of the most beautiful pink-gold light Northeast L.A. has ever conjured up and have conversations about art residencies and weird apartment buildings and bike tours and charter schools and air mattresses. Basically, the kinds of everyday conversations I always have with my friends. AK and I agreed on the day we got married that our life—not a ceremony—is our marriage, so it was nice to have an event that felt like our life.

Lori made a short, very sweet toast, and afterward AK’s mom told me she got choked up hearing it. If there’s anything that feels different after Saturday, it’s that I do feel like a little bit more of an Ybarra. People kept telling me how funny they thought my grandma and uncle were, and I did a bit of a double-take: Oh, right! You haven’t heard their schtick [loveable, but undeniably schticky schtick] at every holiday gathering since you were born. It’s exciting to think that soon enough, I will be able to joke with AK about Ybarra schtick. They seem incredibly kickback and normal to me, but I hope it’s only a matter of time until I find them as weird as my own family. 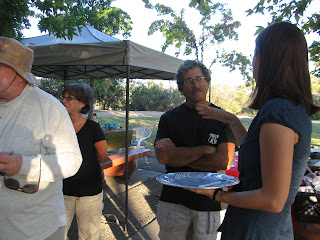 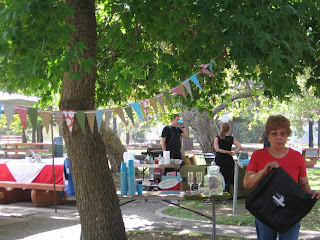 To those of you who helped us celebrate and reminded us how important it is to celebrate stuff like this, thank you. And to those who celebrated in spirit, thank you too, and I’m sorry you missed out on some really great, amazing food. (And AK, you are the great and amazing person at the root of all this. Thanks for being a good sport when I sent the leftover meat home with our parents.) 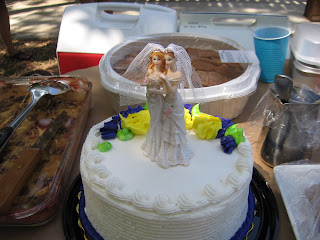 Yay! Looks and sounds like it was an awesome celebration.

Conveniently, we get to do the life thing every day.

Sounds perfect! Glad you had so many wonderful people help. Hooray for love! :-)

Lovely and wonderful, as well as great and amazing, truly.

Beautiful "not-a-wedding party-in-the-park." Beautiful people. Beautiful sentiment. I loved it AND I love you ladies! SOOOOO happy to share your happiness! :)

Oh my God, you guys seem to have had such a great time! I didn't know you got married, I guess you weren't married that long before the party? What a lovely little miniature couple (although they look nothing like you!) on your cake, where did you find such a lovely same-gender cake decoration? I think you have a really healthy view on marriage, belonging to someone is such a beautiful thing, but spending all your savings on a flashy party and a dress you only wear once just seems kinda... Well, dumb. (It happens that I wear my mother's wedding dress or my father's wedding shirt just on a normal day - Why should they waste away in a closet?) Peace and Love!

You'll have to ask our friend Sara where she found the cake topper, but we love it too. It still adorns our kitchen.

I love that you wear your parents' wedding clothes on normal days! Have you ever read the short story "Everyday Use" by Alice Walker? It's a great depiction of that same philosophy.